Electronic special effect transforming a normal video image into a collage of flattened single-colored areas, without graduations of color and brightness.

Posterization or posterization of an image entails conversion of a continuous gradation of tone to several regions of fewer tones, with abrupt changes from one tone to another. This was originally done with photographic processes to create posters. It can now be done photographically or with digital image processing and may be deliberate or an unintended artifact of color quantization.

The effect may be created deliberately, or happen accidentally. For artistic effect, most image editing programs provide a posterization feature, or photographic processes may be used.

Unwanted posterization, also known as banding, may occur when the color depth, sometimes called bit depth, is insufficient to accurately sample a continuous gradation of color tone. As a result, a continuous gradient appears as a series of discrete steps or bands of color — hence the name. When discussing fixed pixel displays, such as LCD and plasma televisions, this effect is referred to as false contouring. Additionally, compression in image formats such as JPEG can also result in posterization when a smooth gradient of color or luminosity is compressed into discrete quantized blocks with stepped gradients. The result may be compounded further by an optical illusion, called the Mach band illusion, in which each band appears to have an intensity gradient in the direction opposing the overall gradient. This problem may be resolved, in part, with dithering.
Photographic process

Posterization is a process in photograph development which converts normal photographs into an image consisting of distinct, but flat, areas of different tones or colors. A posterized image often has the same general appearance, but portions of the original image that presented gradual transitions are replaced by abrupt changes in shading and gradation from one area of tone to another. Printing posterization from black and white requires density separations, which one then prints on the same piece of paper to create the whole image. Separations may be made by density or color, using different exposures. Density Separations may be created by printing three prints of the same picture, each at a different exposure time that will be combined for the final image.
Applications

Typically, posterization is used for tracing contour lines and vectorizing photo-realistic images. This tracing process starts with 1 bit per channel and advances to 4 bits per channel. As the bits per channel increases, the number of levels of lightness a color can display increases.

A visual artist, faced with line art that has been damaged through JPEG compression, may consider posterizing the image as a first step to remove artifacts on the edges of the image.

Temporal posterization is the visual effect of reducing the number of frames of video, while not reducing the speed at which it actually plays. This compares to regular posterization, where the number of individual color variations is reduced, while the overall range of colors is not. The motion effect is similar to the effect of a flashing strobe light but without the contrast of bright and dark. Unlike a pulldown, the unused frames are simply discarded, and it is intended to be apparent (longer than the persistence of vision that video and motion pictures normally depend on). An animated GIF often looks posterized because of its normally-low frame rate.

The resulting stop-go motion is a temporal form of jaggies; formally, a form of aliasing. This effect may be the intention, but to reduce the frame rate without introducing this effect, one may use temporal anti-aliasing, which yields motion blur. 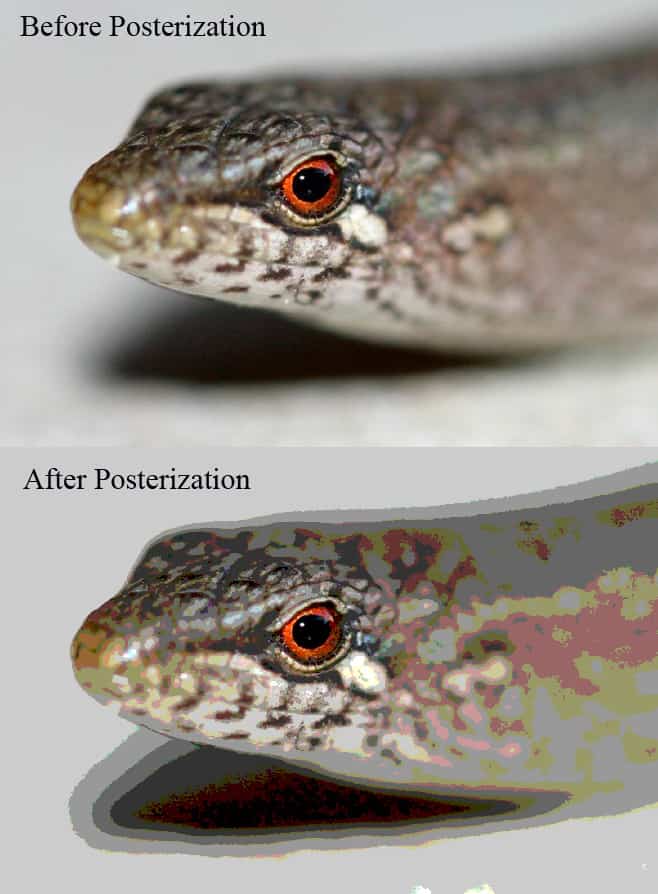