Professional Disc (PFD) is a digital recording optical disc format introduced by Sony in 2003 primarily for XDCAM, its tapeless camcorder system. It was one of the first optical formats to utilize a blue laser, which allowed for a higher density of data to be stored on optical media compared to infrared laser technology used in the CD and red laser technology used in the DVD format.

PFD uses a 405 nm wavelength and a numerical aperture (NA) of 0.85 for the laser, allowing 23 GB of data to be stored on one 12 cm disc – the equivalent to nearly five single-layer DVDs, and a 1x speed data transfer rate of 88 Mbit/s for reading and 72 Mbit/s for writing. After the 23GB disc was released, a dual-layer 50 GB was developed and released.

This format is sometimes confused with the Blu-ray Disc format, another optical disc format using blue-violet lasers, and supported by Sony. Even the PFD's caddy and Blu-ray's prototype caddy (later dropped) looked very similar. Capabilities differ; single-layer PFD discs have a capacity of 23 GB whereas Blu-ray discs can store 25 GB. However, Blu-ray discs currently allow a 2x data transfer rate of 72 Mbit/s – lower than PFD. This is because PFD discs use much higher quality media and drives use higher quality components, making them prohibitively expensive for the consumer segment to which Blu-ray is aimed. PFD discs can have a capacity of up to 100 GB for rewritable discs, and 128 GB for write-once discs. 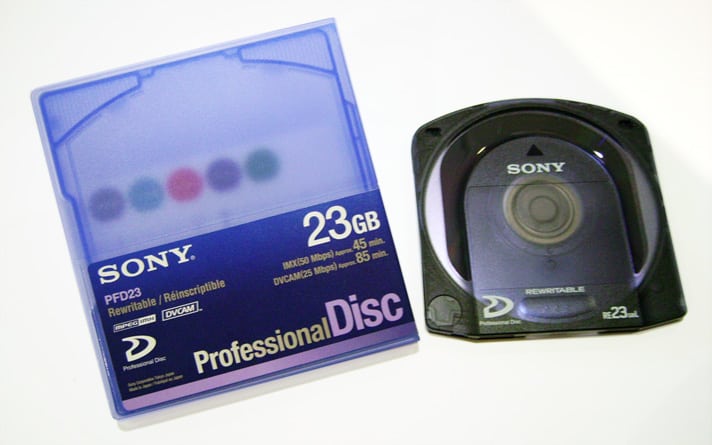