A technique where the actor stands in front of a screen and the background is projected onto the screen behind them.

Rear projection (also known as process photography) is part of many in-camera effects cinematic techniques in film production for combining foreground performances with pre-filmed backgrounds. It was widely used for many years in driving scenes, or to show other forms of "distant" background motion.

The actors stand in front of a screen while a projector positioned behind the screencasts a reversed image of the background. This required a large space, as the projector had to be placed some distance from the back of the screen. Frequently the background image would appear faint and washed out compared to the foreground. The image that is projected can be still or moving but is always called the plate. One might hear the command "Roll plate," to instruct the stage crew to begin projecting.

These so-called process shots were widely used to film actors as if they were inside a moving vehicle, who were, in reality, in a vehicle mock-up on a soundstage. In these cases, the motion of the backdrop film and foreground actors and props were often different due to the lack of Steadicam-like imaging from the moving vehicles used to produce the plate. This was most noticeable as bumps and jarring motions of the background image that would not be duplicated by the actors.

A major advance over rear projection is front projection, which uses a special screen material to allow the plate to be projected from the front of the screen. This results in a much sharper and more saturated image. Although the technique had been used experimentally for some time, it was during the filming of 2001: A Space Odyssey that the modern version was fully developed. In this case, it was used to avoid costly on-location shots in Africa during the opening scenes of the movie, but the effect was also used throughout the film for a variety of shots into or out of the windows of spacecraft. 2001 also used rear projection to produce computer screen effects.

As front projection and bluescreen effects became more widespread and less costly, rear projection has been rendered largely obsolete. Quentin Tarantino used the process for the taxi ride sequence of Pulp Fiction, and James Cameron used rear projection for several special effects shots within Aliens, including the crash of the dropship as well as for several important sequences in Terminator 2: Judgment Day such as the car escape from the mental hospital and the T-1000 hijacking the Police helicopter; he has been described as one of the few people in Hollywood still able to understand and use process photography as an effective technique. Also, the Austin Powers film series frequently used rear projection to help give it the feel of old spy movies; Natural Born Killers used the technique extensively throughout to emphasize characters' subconscious motivations. 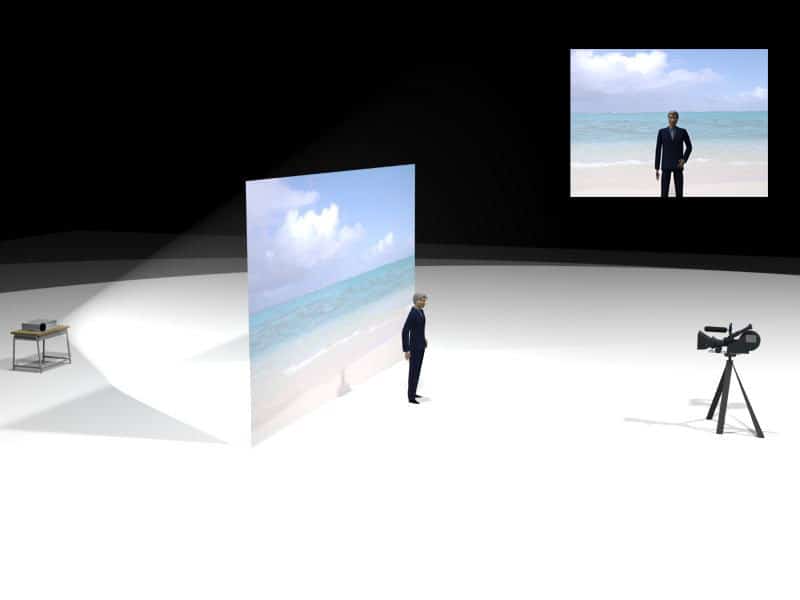