The effectiveness of a surface of a material in reflecting radiant energy.

The reflectance of the surface of a material is its effectiveness in reflecting radiant energy. It is the fraction of incident electromagnetic power that is reflected at an interface. The reflectance spectrum or spectral reflectance curve is the plot of the reflectance as a function of wavelength.

For homogeneous and semi-infinite (see halfspace) materials, reflectivity is the same as reflectance. Reflectivity is the square of the magnitude of the Fresnel reflection coefficient, which is the ratio of the reflected incident electric field; as such the reflection coefficient can be expressed as a complex number as determined by the Fresnel equations for a single layer, whereas the reflectance is always a positive real number.

Most real objects have some mixture of diffuse and specular reflective properties.

Specular reflection from a body of water is calculated by the Fresnel equations. Fresnel reflection is directional and therefore does not contribute significantly to albedo which primarily diffuses reflection.

A real water surface may be wavy. Reflectance, which assumes a flat surface as given by the Fresnel equations, can be adjusted to account for waviness.

The generalization of reflectance to a diffraction grating, which disperses light by wavelength, is called diffraction efficiency. 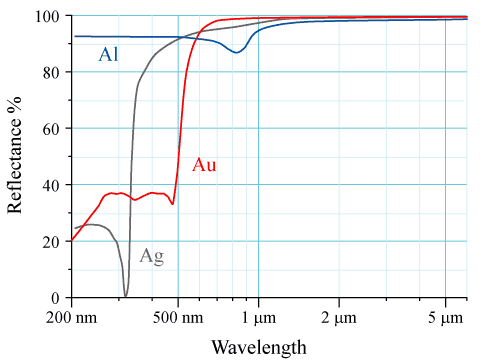