The presence or persistence of sound due to repeated reflections.

Reverberation, in psychoacoustics and acoustics, is a persistence of sound after the sound is produced. A reverberation, or reverb, is created when a sound or signal is reflected causing a large number of reflections to build up and then decay as the sound is absorbed by the surfaces of objects in the space – which could include furniture, people, and air. This is most noticeable when the sound source stops but the reflections continue, decreasing in amplitude, until they reach zero amplitude.

Reverberation is frequency dependent: the length of the decay, or reverberation time, receives special consideration in the architectural design of spaces which need to have specific reverberation times to achieve optimum performance for their intended activity. In comparison to a distinct echo, that is detectable at a minimum of 50 to 100 ms after the previous sound, reverberation is the occurrence of reflections that arrive in a sequence of less than approximately 50 ms. As time passes, the amplitude of the reflections gradually reduces to non-noticeable levels. Reverberation is not limited to indoor spaces as it exists in forests and other outdoor environments where reflection exists.

Reverberation occurs naturally when a person sings, talks, or plays an instrument acoustically in a hall or performance space with sound-reflective surfaces. The sound of reverberation is often electronically added to the vocals of singers and to musical instruments. This is done in both live sound systems and sound recordings by using effects units. Effects units that are specialized in the generation of the reverberation effect are commonly called reverbs.

Whereas reverberation normally adds to the naturalness of recorded sound by adding a sense of space, reverberation can reduce speech intelligibility, especially when noise is also present. Users of hearing aids frequently report difficult in understanding speech in reverberant, noisy situations. Reverberation is a very significant source of mistakes in automatic speech recognition. Dereverberation is the process of reducing the level of reverberation in a sound or signal.

Reverberation time is a measure of the time required for the sound to "fade away" in an enclosed area after the source of the sound has stopped.

When it comes to accurately measuring reverberation time with a meter, the term T60 (an abbreviation for Reverberation Time 60dB) is used. T60 provides an objective reverberation time measurement. It is defined as the time it takes for the sound pressure level to reduce by 60 dB, measured after the generated test signal is abruptly ended.

In the late 19th century, Wallace Clement Sabine started experiments at Harvard University to investigate the impact of absorption on the reverberation time. Using a portable wind chest and organ pipes as a sound source, a stopwatch and his ears, he measured the time from interruption of the source to inaudibility (a difference of roughly 60 dB). He found that the reverberation time is proportional to room dimensions and inversely proportional to the amount of absorption present.

The optimum reverberation time for a space in which music is played depends on the type of music that is to be played in the space. Rooms used for speech typically need a shorter reverberation time so that speech can be understood more clearly. If the reflected sound from one syllable is still heard when the next syllable is spoken, it may be difficult to understand what was said. "Cat", "Cab", and "Cap" may all sound very similar. If on the other hand the reverberation time is too short, tonal balance and loudness may suffer. Reverberation effects are often used in studios to add depth to sounds. Reverberation changes the perceived spectral structure of a sound but does not alter the pitch. 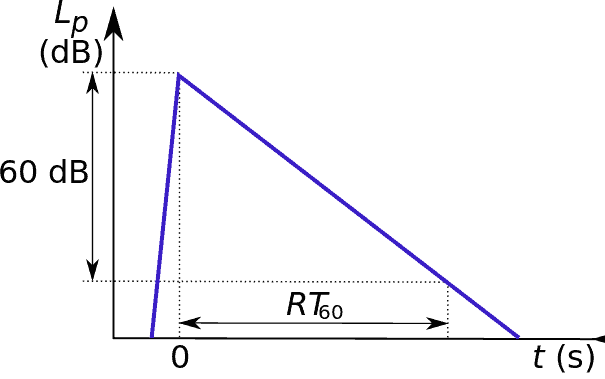