A shot that is turned approximately 180 degrees in relation to the preceding shot.

A reverse angle shot, in cinematography, is a shot taken from an angle 180˚ (opposite) to the previous one. It is used to show how the character reacts to the previous shot.

The action axis allows viewers to orient themselves with the position and direction of action in a scene. If a shot following an earlier shot in a sequence is located on the opposite side of the 180-degree line, then it is called a "reverse cut". Reverse cuts disorient the viewer by presenting an opposing viewpoint of the action in a scene and consequently altering the perspective of the action and the spatial orientation established in the original shot.

Another way to allow for crossing the line is to have several shots with the camera arching from one side of the line to the other during the scene. That shot can be used to orient the audience to the fact that they are looking at the scene from another angle. In the case of movement, if a character is seen walking into frame from behind on the left side walking towards a building corner on the right, as they walk around the corner of the building, the camera can catch them coming towards the camera on the other side of the building entering the frame from the left side and then walk straight at the camera and then exit the left side of the frame.

To minimize the "jolt" between shots in a sequence on either sides of the 180-degree line, a buffer shot can be included along the 180-degree line separating each side. This lets the viewer visually comprehend the change in viewpoint expressed in the sequence. 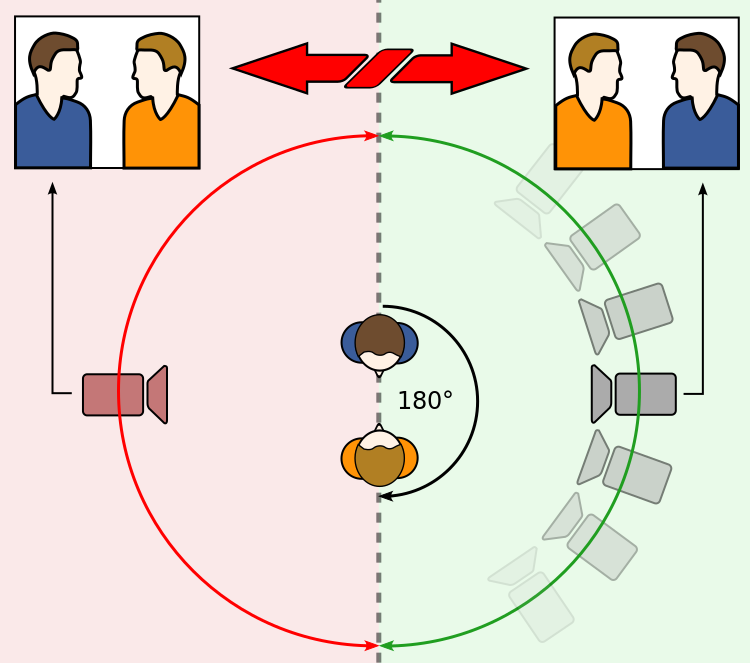