A file containing an RGB image plus an alpha channel for transparency information.

RGBA stands for red green blue alpha. While it is sometimes described as a color space, it is actually the three-channel RGB color model supplemented with a 4th alpha channel. Alpha indicates how opaque each pixel is and allows an image to be combined over others using alpha compositing, with transparent areas and anti-aliasing of the edges of opaque regions.

In computer graphics, pixels encoding the RGBA color space information must be stored in computer memory (or in files on disk), in well-defined formats. There are several ways to encode RGBA colors, which can lead to confusion when image data is exchanged. These encodings are often denoted by the four letters in some order (e.g. RGBA, ARGB, etc.). Unfortunately, the interpretation of these 4-letter mnemonics is not well established, leading to further confusion. There are two typical ways to understand a mnemonic such as "RGBA":

In a big-endian system, the two schemes are equivalent. This is not the case for a little-endian system, where the two mnemonics are reverses of each other. Therefore, to be unambiguous, it is important to state which order is used when referring to the encoding. 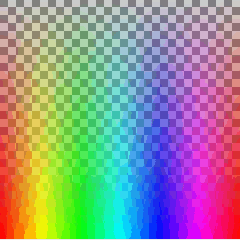