Ring Flash
A circular photographic electronic flash that fits around a camera lens.

A ring flash is a circular photographic electronic flash that fits around a camera lens. Unlike point light sources, a ring flash provides even illumination with few shadows visible in the resulting photographs because the origin of the light is very close to (and surrounds) the optical axis of the lens. It was invented by Lester A. Dine in 1952 for use in dental photography, but now is commonly used in applications such as macro, portrait and fashion photography.

As the efficiency of light sources, and the sensitivity of photographic imaging sensors, increased, the use of a continuous ring light instead of a flash increased. A ring light has the same advantages as a ring flash, but produces continuous light at a lower intensity, so the image can be examined before taking the photograph. In the past a circular fluorescent tube was often used; LEDs are now frequently used. Brightness and colour temperature can be changed on some devices. In addition to lights that are fitted to the filter ring of a camera, inexpensive versions that clip onto a mobile phone or other device equipped with a camera (facing away from or towards the user) are available.

A macro ring flash typically consists of a power and control unit mounted on a hot shoe, and a circular flash unit mounted on the front of a lens. Power is supplied by batteries in the shoe-mount unit and a cable conveys power and control signals to the circular flash unit. In larger ring flashes, which are typically used for fashion photography, power may be supplied by an external battery or line power supply, or the power supply and light may be combined in one unit.

Light is usually generated by one or more flash tubes or by multiple LEDs. In some flash units with multiple flash tubes, each flash tube can be independently enabled. Some ring flashes have focusing lenses that result in ideal light distribution at a particular distance from the subject.

Other devices are available that project light in a fashion similar to ring flashes. For example, flash diffusers have no light source of their own, but instead mount in front of a conventional flash unit and transmit the light to a ring-shaped diffuser at the front of the lens. Some other passive light modifiers can shape the light from a conventional shoe-mounted flash into that of a ring flash. These adapters use diffusers and reflectors to "bend" the light in an arc around the lens axis and then emit the light from that arc. These devices maintain any through-the-lens (TTL) lighting functions that are shared by the camera and flash because the timing of the light has not changed.

Ring flashes are commonly used in macro (close-up) photography. When the subject is very close to the camera, the distance of the flash from the optical axis becomes significant. For objects close to the camera, the size of the ring flash is significant and so the light encounters the subject from many angles in the same way that it does with a conventional flash with soft box. This has the effect of further softening any shadows.

Ring flashes are also popular in portrait and fashion photography because they soften the shadows created by other, off-axis lights, and create interesting circular highlights in a model's eyes. Ring Lights are also often used in the beauty and cosmetic industry, mostly by make-up artists. This is due to the lightweight and compact features of a ring light that make it suitable for freelance beauty and make-up artists.

Ring flashes are also used in microscopy. The ring flash (usually LED) is mounted on the objective lens of an optical microscope. The main use of this tool is the photographing of microscopic organisms. A ring flash works on a microscope in much the same way as it does on a camera; it reduces reflections while bathing the subject in light. 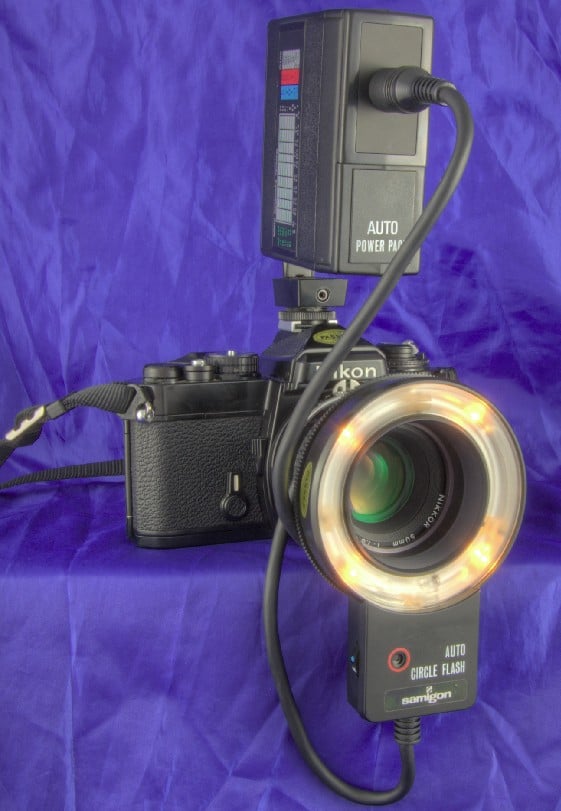