Room modes are the collection of resonances that exist in a room when the room is excited by an acoustic source such as a loudspeaker. Most rooms have their fundamental resonances in the 20 Hz to 200 Hz region, each frequency being related to one or more of the room's dimensions or a divisor thereof. These resonances affect the low-frequency low-mid-frequency response of a sound system in the room and are one of the biggest obstacles to accurate sound reproduction.

The mechanism of the room's resonances

Minimizing the effect of room resonances

A room with generally hard surfaces will exhibit high-Q, sharply tuned resonances. Absorbent material can be added to the room to damp such resonances which work by more quickly dissipating the stored acoustic energy.

In order to be effective, a layer of porous, absorbent material has to be of the order of a quarter-wavelength thick if placed on a wall, which at low frequencies with their long wavelengths requires very thick absorbers. Absorption occurs through the friction of the air motion against individual fibers, with kinetic energy converted to heat, and so the material must be of just the right 'density' in terms of fiber packing. Too loose, and sound will pass through, but too firm and reflection will occur. Technically it is a matter of impedance matching between air motion and the individual fibers. Glass fibre, as used for thermal insulation, is very effective, but needs to be very thick (perhaps four to six inches) if the result is not to be a room that sounds unnaturally 'dead' at high frequencies but remains 'boomy' at lower frequencies, so that it provides absorption across a broad range of frequencies. Curtains and carpets are only effective at high frequencies (say 5 kHz and above).

As a rule of thumb, sound travels at one foot per millisecond (344 m/s), so the wavelength of notes at 1 kHz is about a foot (344mm), and at 10 kHz about an inch (34mm). Even six inches of glass fiber has little effect at 100 Hz, where a quarter wavelength is over 2 feet (860mm), and so adding absorbent material has virtually no effect in the lower bass region in the 20–50 Hz region, though it can bring about great improvement in the upper bass region above 100 Hz.

Open apertures, dispersion cylinders (large diameter and usually wall height), carefully sized and placed panels, and irregular room shapes are another way of either absorbing energy or breaking up resonant modes. For absorption, as with large foam wedges seen in anechoic chambers, the loss occurs ultimately through turbulence, as colliding air molecules convert some of their kinetic energy into heat. Damped panels, typically consisting of sheets of hardboard between glass fiber battens, have been used to absorb bass, by allowing movement of the surface panel and energy absorption by friction with the fiber battens.

If a room is being constructed, it is possible to choose room dimensions for which its resonances are less audible. This is done by ensuring that multiple room resonances are not at similar frequencies. For example, a cubic room would exhibit three resonances at the same frequency.

Equalization of the sound system to compensate for the uneven frequency response caused by room resonances is of very limited use as the equalization only works for one specific listening position and will actually cause the response to be worse in other listening positions. Also, large bass boosts by sound system EQ can severely reduce the headroom in the sound system itself. Some vendors are currently providing elaborate room tuning equipment which requires precision microphones, extensive data collection, and uses computerized electronic filtering to implement the necessary compensation for the rooms modes. There is some controversy about the relative worth of the improvement in ordinary rooms, given the very high cost of these systems. 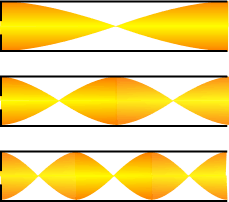 Room modes
see also
resources
source
Adapted from content published on wikipedia.org
Last modified on July 17, 2019, 9:48 am
previous
next
Videocide.com is a service provided by Codecide, a company located in Chicago, IL USA.