An image containing salt-and-pepper noise will have dark pixels in bright regions and bright pixels in dark regions.

Image noise is a random variation of brightness or color information in images and is usually an aspect of electronic noise. It can be produced by the sensor and circuitry of a scanner or digital camera. Image noise can also originate in film grain and in the unavoidable shot noise of an ideal photon detector. Image noise is an undesirable by-product of image capture that obscures the desired information.

Fat-tail distributed or "impulsive" noise is sometimes called salt-and-pepper noise or spike noise. An image containing salt-and-pepper noise will have dark pixels in bright regions and bright pixels in dark regions. This type of noise can be caused by analog-to-digital converter errors, bit errors in transmission, etc. It can be mostly eliminated by using dark frame subtraction, median filtering, combined median and mean filtering and interpolating around dark/bright pixels.

Dead pixels in an LCD monitor produce a similar, but non-random, display. 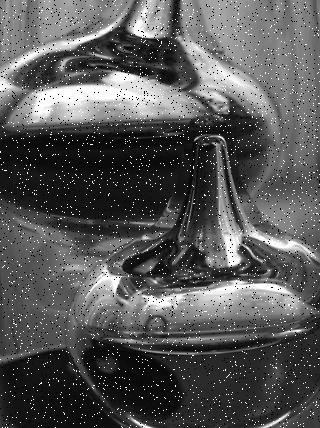