A dish-shaped antenna that receives or transmits information from or to a satellite.

A satellite dish is a dish-shaped type of parabolic antenna designed to receive or transmit information by radio waves to or from a communication satellite. The term most commonly means a dish that receives direct-broadcast satellite television from a direct broadcast satellite in geostationary orbit.

The parabolic shape of a dish reflects the signal to the dish’s focal point. Mounted on brackets at the dish's focal point is a device called a feedhorn. This feedhorn is essentially the front-end of a waveguide that gathers the signals at or near the focal point and 'conducts' them to a low-noise block downconverter or LNB. The LNB converts the signals from electromagnetic or radio waves to electrical signals and shifts the signals from the downlinked C-band and/or Ku-band to the L-band range. Direct broadcast satellite dishes use an LNBF, which integrates the feedhorn with the LNB. A new form of omnidirectional satellite antenna, which does not use a directed parabolic dish and can be used on a mobile platform such as a vehicle was announced by the University of Waterloo in 2004.

The theoretical gain (directive gain) of a dish increases as the frequency increases. The actual gain depends on many factors including surface finish, the accuracy of shape, feedhorn matching. A typical value for a consumer type 60 cm satellite dish at 11.75 GHz is 37.50 dB.

With lower frequencies, C-band for example, dish designers have a wider choice of materials. The large size of dish required for lower frequencies led to the dishes being constructed from metal mesh on a metal framework. At higher frequencies, mesh-type designs are rarer though some designs have used a solid dish with perforations.

A common misconception is that the LNBF (low-noise block/feedhorn), the device at the front of the dish, receives the signal directly from the atmosphere. For instance, one BBC News downlink shows a "red signal" being received by the LNBF directly instead of being beamed to the dish, which because of its parabolic shape will collect the signal into a smaller area and deliver it to the LNBF.

Modern dishes intended for home television use are generally 43 cm (18 in) to 80 cm (31 in) in diameter and are fixed in one position, for Ku-band reception from one orbital position. Prior to the existence of direct broadcast satellite services, home users would generally have a motorized C-band dish of up to 3 m in diameter for the reception of channels from different satellites. Overly small dishes can still cause problems, however, including rain fade and interference from adjacent satellites. 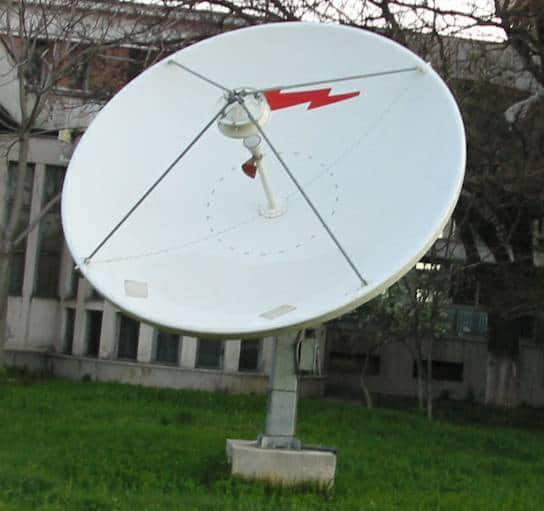