A writer who practices the craft of screenwriting, writing screenplays on which mass media, such as films, television programs, and video games, are based.

A screenplay writer (also called screenwriter for short), scriptwriter or scenarist is a writer who practices the craft of screenwriting, writing screenplays on which mass media, such as films, television programs and video games, are based.

There are a legion of would-be screenwriters who attempt to enter the film industry, but it often takes years of trial-and-error, failure, and gritty persistence to achieve success. In Writing Screenplays that Sell, Michael Hague writes, "Screenplays have become, for the last half of century, what the Great American Novel was for the first half. Closet writers who used to dream of the glory of getting into print now dream of seeing their story on the big or small screen."

Every screenplay and teleplay begins with a thought or idea, and screenwriters use their ideas to write scripts, with the intention of selling them and having them produced. In some cases, the script is based on an existing property, such as a book or person's life story, which is adapted by the screenwriter. The majority of the time, a film project gets initiated by a screenwriter. The initiator of the project gets the exclusive writing assignment. They are referred to as "exclusive" assignments or "pitched" assignments. Screenwriters who often pitch new projects, whether original or an adaptation, often do not have to worry about competing for assignments and are often more successful. When word is put out about a project a film studio, production company, or producer wants done, they are referred to as "open" assignments. Open assignments are more competitive. If screenwriters are competing for an open assignment, more-established writers usually win the assignments. A screenwriter can also be approached and personally offered a writing assignment.

Many screenwriters also work as full or part-time script doctors, attempting to better a script to suit the desires of a director or studio. For instance, studio management may have a complaint that the motivations of the characters are unclear or that the dialogue is weak.

Script-doctoring can be quite lucrative, especially for the better-known writers. David Mamet and John Sayles, for instance, fund the movies that they direct themselves, usually from their own screenplays, by writing and doctoring scripts for others. In fact, some writers make very profitable careers out of being the ninth or tenth writer to work on a piece, and they often work on projects that never see exposure to an audience of any size. Many up-and-coming screenwriters also ghostwrite projects and allow more-established screenwriters to take public credit for the project to increase the chances of it getting picked up.

After a screenwriter finishes a project, he or she pairs with an industry-based representative, such as a producer, director, literary agent, entertainment lawyer, or entertainment executive. The partnerships often pitch their project to investors or others in a position to further a project. Once the script is sold, the writer has only the rights that were agreed with the purchaser.

A screenwriter becomes credible by having work that is recognized, which gives the writer the opportunity to earn a higher income. As more films are produced independently (outside the studio system), many up-and-coming screenwriters are turning to pitch fests, screenplay contests, and independent development services to gain access to established and credible independent producers. Many development executives are now working independently to incubate their own pet projects.

Screenwriters are rarely involved in the development of a film. Sometimes they come on as advisors, or if they are established, as a producer. Some screenwriters also direct. Although many scripts are sold each year, many do not make it into production because the number of scripts that are purchased every year exceeds the number of professional directors that are working in the film and TV industry. When a screenwriter finishes a project and sells it to a film studio, production company, TV network, or producer, he or she often has to continue networking, mainly with directors or executives, and push to have their projects "chosen" and turned into films or TV shows. If interest in a script begins to fade, a project can go dead.

Most professional screenwriters in the U.S. are unionized and are represented by the Writers Guild of America. Although membership in the WGA is recommended, it is not required of a screenwriter to join. The WGA is the final arbiter on awarding writing credit for projects under its jurisdiction. The WGA also looks upon and verifies film copyright materials. 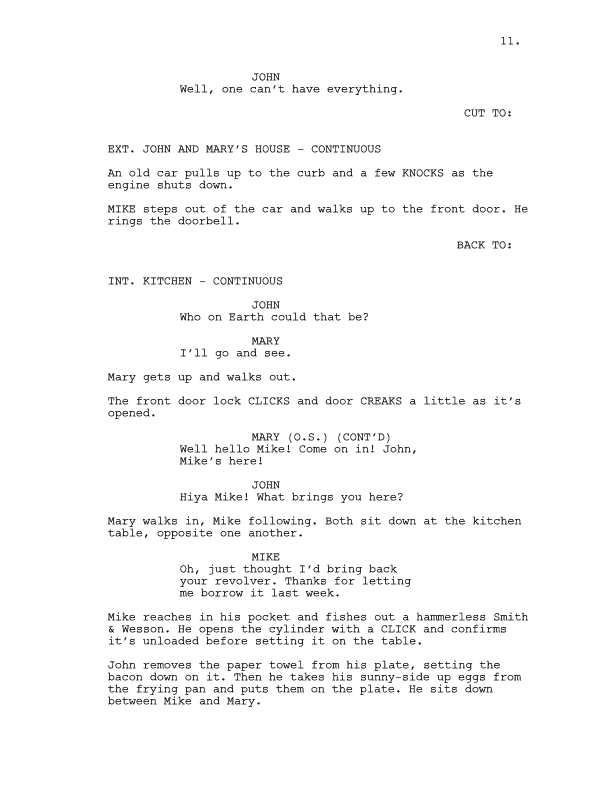