Sensitometry is the scientific study of light-sensitive materials, especially photographic film. The study has its origins in the work by Ferdinand Hurter and Vero Charles Driffield (circa 1876) with early black-and-white emulsions. They determined how the density of silver produced varied with the amount of light received, and the method and time of development.

Plots of film density (log of opacity) versus the log of exposure are called characteristic curves, Hurter–Driffield curves, H–D curves, HD curves, H & D curves, D–logE curves, or D–logH curves. At moderate exposures, the overall shape is typically a bit like an "S" slanted so that its base and top are horizontal. There is usually a central region of the HD curve that approximates a straight line, called the "linear" or "straight-line" portion; the slope of this region is called the gamma. The low end is called the "toe", and at the top, the curve rounds over to form the "shoulder". At extremely high exposures, the density may come back down, an effect known as solarisation.

Different commercial film materials cover a gamma range from about 0.5 to about 5. Often it is not the original film that one view but a second or later generation. In these cases, the end-to-end gamma is approximately the product of the separate gammas. Photographic paper prints have end-to-end gammas generally somewhat over 1. Projection transparencies for dark surround viewing have end-to-end gamma of approximately 1.5. A full set of HD curves for a film shows how these vary with developer type and time.
Sensitometry and film in television

Although films originally made for television in Great Britain (whether by telerecording or by conventional cinematography) will be photographed at 25 frames per second, films exposed for cinema exhibition at 24 frames per second are also transmitted for television at 25 frames per second. This naturally causes an increase in the speed of image movement and raises the frequency of sound reproduction by approximately 4 percent. (this results in the pitch of musical notes rising by something less than a semi-tone and is acceptable to all but the most critical ear).

Gamma-control amplifiers in television transmission equipment are capable of inverting the phase or contrast relationship of the signal—in practice, this means that an incoming negative image can be electronically converted eventually to appear as a positive image displayed by the television receiver. This facility may also be employed during live studio transmissions, for special trick effects, and is not confined only to film work. Because of this, it is not necessary to make prints from motion picture negatives before they can be utilized in television programs although, for several reasons connected with program acquisition and distribution, it often happens that positive film images are used. Furthermore, the presence of any dirt or dust on the film will appear as a white spot when negative is transmitted, but as a black spot if a positive film is transmitted. Since black spots are far less noticeable to the viewer, this is one strong reason for transmitting positive film images whenever possible.

In television the original image passes through many stages before finally emerging as a recognizable picture but, in all cases, the film is ultimately projected via a telecine machine—this is basically a special form of the film projector in conjunction with a television camera. Telecine equipment scans the pictorial image information and creates an electrical version of the picture in terms of a television signal. This signal is eventually converted back into a recognizable picture when, at suitably modified strength, it energizes the phosphor in the cathode-ray tube of the domestic receiver.

Apart from the widely employed factors such as log exposure, density, opacity, and transmission, sensitometric control of film for television transmission is also particularly concerned with contrast ratios. The definition of contrast ratio is therefore re-stated as follows: 'The ratio between the opacities of the darkest and lightest points in the film image', thus:

As we have already seen, opacity is not easily measured with standard photographic equipment—but the logarithm of opacity is continually measured since, in fact, it is the unit of image saturation known as density. Since density is a logarithm we must take the ratio of the anti-logarithms of the maximum and minimum densities in the image in order to arrive at the contrast ratio. This may be written so:

If this is applied to the well-known B.B.C. Test Card 'C', we find that, in the positive film version of the card, the maximum density is 2•0 whilst the minimum density is 0•3. Therefore the contrast ratio is as follows:

When applied to the negative film version of the same test card, the maximum density is 1•30 although the minimum density remains at 0•30. The contrast ratio of the negative is therefore as follows:

Figure 1 illustrates the several ways in which the viewer may receive monochrome television pictures. At the top of the diagram, we see that an original scene is fed from the television camera during a live transmission via a video transmitter having a gamma value of 0•4. Since the cathode-ray tube in the domestic receiver has an effective gamma value of 2•5, the final screen picture will be at a gamma of 1•0—equal to the original scene. The film is used to supplement television programs in two ways; either originating as a telerecording or as a motion picture film. In any event, it must pass through film processing and possibly printing equipment before reaching the telecine machine and, in all cases, the overall gamma for the entire film-using system must be 1•0 so that, for example, sections of the film may be inter-cut with live transmissions. One example of this is, of course, the many sections of television news film material rapidly intercut with live announcements by the newsreader.

In the remaining case, the gamma of the film printing machine and also of the positive film processing must also be accommodated. When motion picture films are made for television purposes the conditions shown at the foot of Figure 1 will apply. Here it is possible to transmit the negative film image directly by phase or contrast inversion, or to make a positive film copy and to transmit this instead, in either case, the gamma of the films plus the telecine equipment must result in a product-gamma of unity.

There are several ways of displaying the picture which is to be telerecorded; there are several types of film on which to make the recording; there are various types of telerecording cameras, some of which record a so-called suppressed-field image, whilst others record full information; finally, there are various types of telecine equipment, such as vidicon or flying-spot image transducers. It is quite impossible to discuss all the various techniques and fundamental principles of television equipment in a book of this nature; for similar reasons, it is not possible to quote one fixes set of gamma and density values which, once achieved, would satisfy each stage of the various combinations of equipment involved in the basic methods outlined in Figure 1.

However, some idea of the variations which may be encountered is gained from the table in Figure 2. In system 'A' a telerecording negative is printed before final transmission and, by some standards, the recording amplifier gamma is high, the display tube and film print gammas are low and the final telecine gamma correction is somewhat high. By comparison, system 'C' employs a much lower recording amplifier gamma, higher display tube and print film gamma values, and a relatively lower telecine gamma correction. 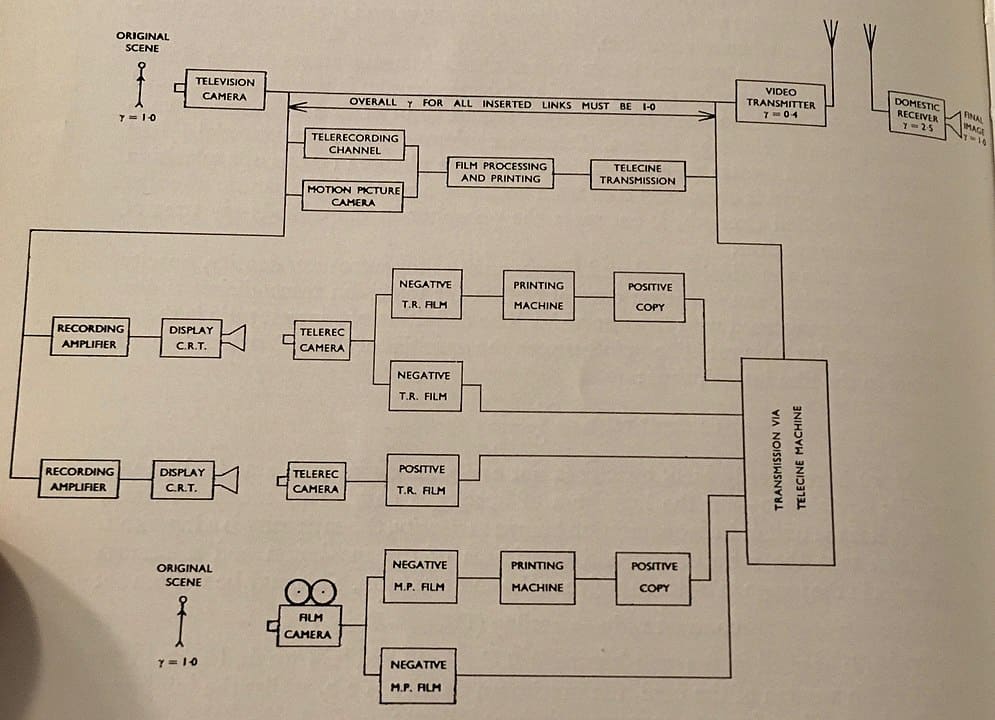