A device that is connected to a television so that it can receive digital signals.

In this context, content could refer to any or all of the following:

Before the All-Channel Receiver Act of 1962 required US television receivers to be able to tune the entire VHF and UHF range (which in North America was NTSC-M channels 2 through 83 on 54 to 890 MHz), a set-top box known as a UHF converter would be installed at the receiver to shift a portion of the UHF-TV spectrum onto low-VHF channels for viewing. As some 1960s-era 12-channel TV sets remained in use for many years, and Canada and Mexico were slower than the US to require UHF tuners to be factory-installed in new TVs, a market for these converters continued to exist for much of the 1970s.

Cable television represented a possible alternative to deployment of UHF converters as broadcasts could be frequency-shifted to VHF channels at the cable head-end instead of the final viewing location. However, most cable systems could not accommodate the full 54-890 MHz VHF/UHF frequency range and the twelve channels of VHF space were quickly exhausted on most systems. Adding any additional channels, therefore, needed to be done by inserting the extra signals into cable systems on nonstandard frequencies, typically either below VHF channel 7 (mid-band) or directly above VHF channel 13 (superband).

These frequencies corresponded to non-television services (such as two-way radio) over-the-air and were therefore not on standard TV receivers. Before cable-ready TV sets became common in the late 1980s, an electronic tuning device called a cable converter box was needed to receive the additional analog cable TV channels and transpose or convert the selected channel to analog radio frequency (RF) for viewing on a regular TV set on a single channel, usually VHF channel 3 or 4. The box allowed an analog non-cable-ready television set to receive analog encrypted cable channels and was a prototype topology for later date digital encryption devices. Newer televisions were then converted to be analog cipher cable-ready, with the standard converter built-in for selling premium television (aka pay per view). Several years later and slowly marketed, the advent of digital cable continued and increased the need for various forms of these devices. Block conversion of the entire affected frequency band onto UHF, while less common, was used by some models to provide full VCR compatibility and the ability to drive multiple TV sets, albeit with a somewhat nonstandard channel numbering scheme.

Newer television receivers greatly reduced the need for external set-top boxes, although cable converter boxes continue to be used to descramble premium cable channels according to carrier-controlled access restrictions, and to receive digital cable channels, along with using interactive services like video on demand, pay per view, and home shopping through television.

Set-top boxes were also made to enable closed captioning on older sets in North America before this became a mandated inclusion in new TV sets. Some have also been produced to mute the audio (or replace it with noise) when profanity is detected in the captioning, where the offensive word is also blocked. Some also include a V-chip that allows only programs of some television content ratings. A function that limits children's time watching TV or playing video games may also be built-in, though some of these work on main electricity rather than the video signal.

The transition to digital terrestrial television after the turn of the millennium left many existing television receivers unable to tune and display the new signal directly. In the United States, where the analog shutdown was completed in 2009 for full-service broadcasters, a federal subsidy was offered for coupon-eligible converter boxes with deliberately limited capability which would restore signals lost to digital transition.

Professional set-top boxes are referred to as IRDs or integrated receiver/decoders in the professional broadcast audio/video industry. They are designed for more robust field handling and rack mounting environments. IRDs are capable of outputting uncompressed serial digital interface signals, unlike consumer STBs which usually don't, mostly because of copyright reasons.

As examples, Hybrid Broadcast Broadband TV (HbbTV) set-top boxes allow traditional TV broadcasts, whether from terrestrial (DTT), satellite, or cable providers, to be brought together with video delivered over the Internet and personal multimedia content. Advanced Digital Broadcast (ADB) launched its first hybrid DTT/IPTV set-top box in 2005, which provided Telefónica with the digital TV platform for its Movistar TV service by the end of that year. In 2009, ADB provided Europe's first three-way hybrid digital TV platform to Polish digital satellite operator n, which enables subscribers to view integrated content whether delivered via satellite, terrestrial, or internet.

UK based Inview Technology has over 8M STBs deployed in the UK for Teletext and an original push VOD service for Top Up TV.

In IPTV networks, the set-top box is a small computer providing two-way communications on an IP network and decoding the video streaming media. IP set-top boxes have a built-in home network interface that can be Ethernet, Wireless (802.11 g,n,ac), or one of the existing wire home networking technologies such as HomePNA or the ITU-T G.hn standard, which provides a way to create a high-speed (up to 1Gbit/s) local area network using existing home wiring (power lines, phone lines, and coaxial cables).

In the US and Europe, telephone companies use IPTV (often on ADSL or optical fiber networks) as a means to compete with traditional local cable television monopolies.

This type of service is distinct from Internet television, which involves third-party content over the public Internet not controlled by the local system operator. 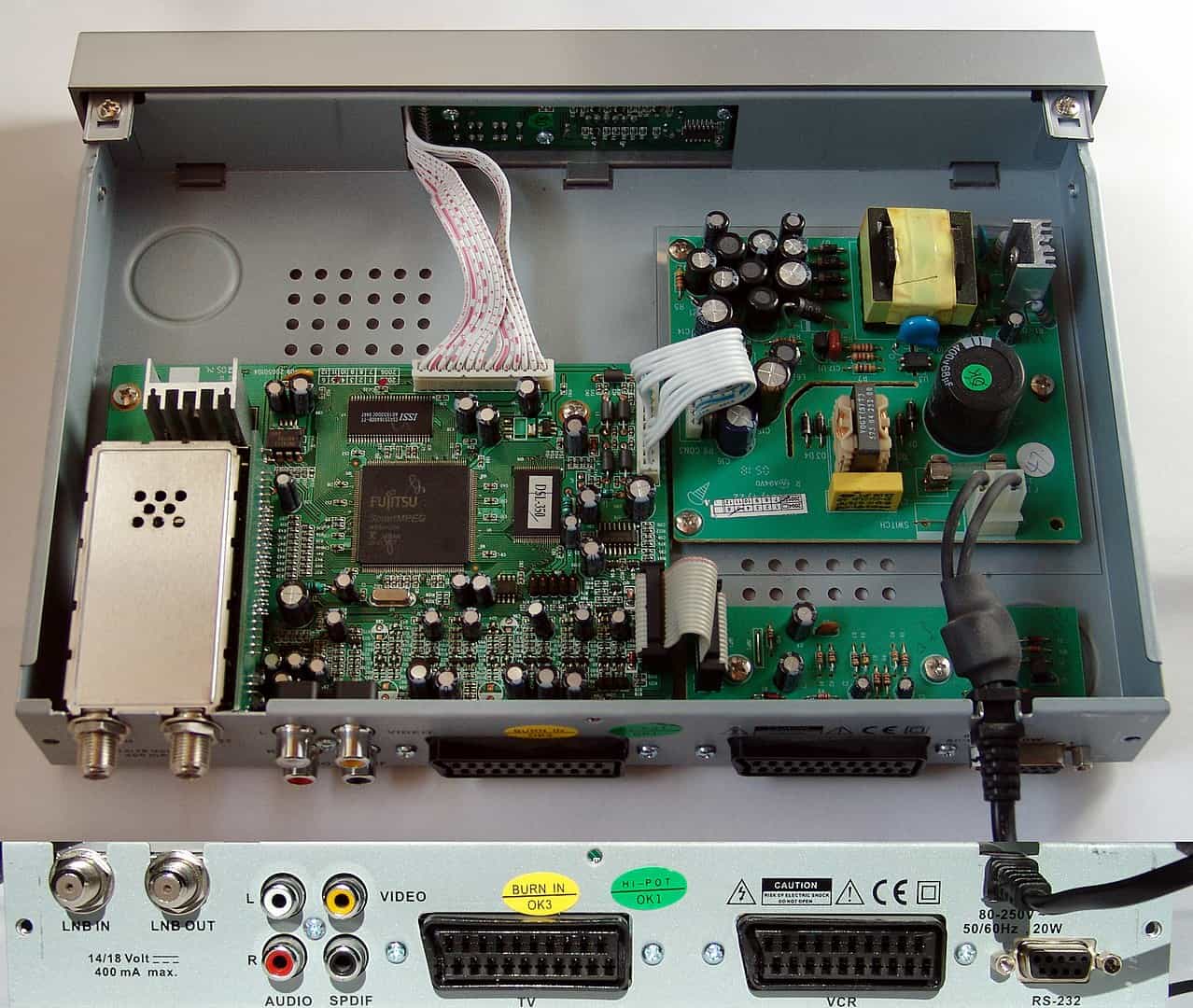 Set-top box
acronymn
also known as
see also
resources
source
Adapted from content published on wikipedia.org
credit
Last modified on May 25, 2021, 4:50 am
previous
next
Videocide.com is a service provided by Codecide, a company located in Chicago, IL USA.