The form of variation with time of a wave whereby information is conveyed in some form whether it is acoustic or electronic.

In communication systems, signal processing, and electrical engineering, a signal is a function that "conveys information about the behavior or attributes of some phenomenon". In its most common usage, in electronics and telecommunication, this is a time varying voltage, current or electromagnetic wave used to carry information. A signal may also be defined as an "observable change in a quantifiable entity". In the physical world, any quantity exhibiting variation in time or variation in space (such as an image) is potentially a signal that might provide information on the status of a physical system, or convey a message between observers, among other possibilities. The IEEE Transactions on Signal Processing states that the term "signal" includes audio, video, speech, image, communication, geophysical, sonar, radar, medical and musical signals. In a later effort of redefining a signal, anything that is only a function of space, such as an image, is excluded from the category of signals. Also, it is stated that a signal may or may not contain any information.

In nature, signals can take the form of any action by one organism able to be perceived by other organisms, ranging from the release of chemicals by plants to alert nearby plants of the same type of a predator, to sounds or motions made by animals to alert other animals of the presence of danger or of food. Signaling occurs in organisms all the way down to the cellular level, with cell signaling. Signaling theory, in evolutionary biology, proposes that a substantial driver for evolution is the ability for animals to communicate with each other by developing ways of signaling. In human engineering, signals are typically provided by a sensor, and often the original form of a signal is converted to another form of energy using a transducer. For example, a microphone converts an acoustic signal to a voltage waveform, and a speaker does the reverse.

The formal study of the information content of signals is the field of information theory. The information in a signal is usually accompanied by noise. The term noise usually means an undesirable random disturbance, but is often extended to include unwanted signals conflicting with the desired signal (such as crosstalk). The prevention of noise is covered in part under the heading of signal integrity. The separation of desired signals from a background is the field of signal recovery, one branch of which is estimation theory, a probabilistic approach to suppressing random disturbances. 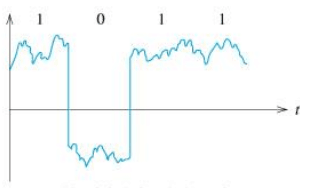