A method of filmmaking and video production.

The single-camera setup originally developed during the birth of the classical Hollywood cinema in the 1910s and has remained the standard mode of production for cinema. In television production, both single-camera and multiple-camera methods are commonly used.

In this setup, each of the various shots and camera angles is taken using the same camera, or multiple cameras pointed in one direction, which is moved and reset to get each shot or new angle. If a scene cuts back and forth between actor A and actor B, the director will first point the camera towards A and run part or all of the scene from this angle, then move the camera to point at B, relight, and then run the scene through from this angle. Choices can then be made during the post-production editing process for when in the scene to use each shot, and when to cut back and forth between the two (or usually more than two) angles. This also then allows parts of the scene to be removed if it is felt that the scene is too long. In practice, sometimes two cameras shooting from the same angle are used: one to capture a medium shot, the other a close-up during the same take.

By contrast, a multiple-camera setup consists of multiple cameras arranged to capture all of the different camera angles of the scene simultaneously, and the set must be lit to accommodate all camera setups concurrently. Multi-camera production generally results in faster but less versatile videography, whereas the single-camera setup is more time-consuming but gives the director more control over each shot. 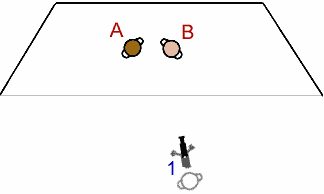