A television test pattern used to configure monitors to the NTSC standard.

The SMPTE color bars is a television test pattern used to configure monitors to the NTSC standard.

The Society of Motion Picture and Television Engineers (SMPTE) refers to it as Engineering Guideline EG 1-1990. Its components are a known standard. Comparing it as received to the known standard gives video engineers an indication of how an NTSC video signal has been altered by recording or transmission and what adjustments must be made to bring it back to specification. It is also used for setting a television monitor or receiver to reproduce NTSC chrominance and luminance information correctly. It was originally conceived by Norbert D. Larky and David D. Holmes of rca Laboratories and first published in rca Licensee Bulletin LB-819 on February 7, 1951. U.S. patent 2,742,525 Color Test Pattern Generator was awarded on April 17, 1956 to Norbert D. Larky and David D. Holmes.

Previously categorized by SMPTE as ECR 1-1978, its development was awarded an Engineering Emmy in 2001-2002. An extended version of SMPTE Color Bars signal, developed by the Japanese Association of Radio Industry and Businesses as ARIB STD-B28 and standardized as SMPTE RP 219:2002 (High-Definition, Standard-Definition Compatible Color BaSMPTE Color Bars Signal) was introduced to test HDTV signal with an aspect ratio of 16:9 that can be down-converted to an SDTV color bar signal with an aspect ratio of either 4:3 or 16:9.

The Color Bar signal is generated with unconventionally slow rise and fall time value to facilitate video level control and monitor color adjustments of HDTV and SDTV equipment. Digital test images generated following the SMPTE RP 219:2002 specifications and adapted to perfectly fit 114 standard and non-standard resolutions for both 16bpp and 8bpp, are freely available in the COLOR dataset of the TESTIMAGES archive.

In a survey of the top standards of the organizations' first 100 years, SMPTE EG-1 was voted as the 5th-most important SMPTE standard. Both versions of the SMPTE Color Bars EG 1-1990 and RP 219:2002 are protected by SMPTE copyright.

In an SMPTE color bar image, the top two-thirds of the television picture contain seven vertical bars of 75% intensity. In order from left to right, the colors are white, yellow, cyan, green, magenta, red, and blue. This sequence runs through all seven possible combinations that use at least one of the three basic color components of green, red, and blue, with blue cycling on and off between every bar, red cycling on and off every two bars, and green on for the leftmost four bars and off for the rightmost three.

Because green contributes the largest share of luminance, followed by red, then blue, this sequence of bars thus appears on a waveform monitor in luminance mode as a downward staircase from left to right. The graticule of a vectorscope is etched with boxes showing the permissible regions where the traces from these seven bars are supposed to fall if the signal is properly adjusted.

The bottom section contains a square of 100% intensity white and a rectangle of 7.5% intensity black, for use in setting the luminance range. More modern versions of the pattern feature a "pluge pulse." The white square lines up so that it is below the green and cyan bars, on a waveform monitor this will show up with the white bar overlapping the peak of the yellow and cyan chroma at 100 IRE units.

The pluge (short for "Picture Line-Up Generation Equipment") pulse is positioned within the black rectangle, below the red bar (it is present in the illustration but may be hard to see). It comprises three small vertical bars, a rightmost one with intensity 4% above black level (11.5 IRE), a middle one with intensity exactly equal to black (7.5 IRE), and a leftmost one with intensity 4% below black (super-black or "blacker than black", 3.5 IRE). The pluge pulse aids in adjusting the bottom of the luminance range to avoid either washing out the black tones into grays or collapsing picture information into the signal clipping that occurs a small distance below the black level (known as "crushing the blacks").

When a monitor is properly adjusted, the rightmost pluge bar should be just barely visible, while the left two should appear indistinguishable from each other and completely black. Also in the bottom section are two sections that contain -In-phase and +Quadrature signals (see YIQ), centered on black level and having the same gain as the color burst signal; these show up on the pattern as a square of very dark blue, and a square of very dark purple. On a vectorscope, they appear as two short lines ninety degrees apart. These are used to ensure that the television receiver is properly demodulating the 3.58 MHz color subcarrier portion of the signal. The vectors for the -I and +Q blocks should fall exactly on the I and Q axes on the vectorscope if the chrominance signal is demodulated properly.

These bars give rise to the former portion of the casual term, "bars and tone". Typically, a television network, TV station, or other originator of video programming transmits SMPTE color bars together with a continuous 1000 Hz audio tone before sending program material, in order to assert ownership of the transmission line or medium, and so that receiving stations and intermediary telecommunications providers may adjust their equipment. Likewise, producers of television programs typically record "bars and tone" at the beginning of a videotape or other recording medium so that the playback equipment can be calibrated. Often, the name or callsign of the TV station, other information such as a real-time clock, or another signal source is graphically superimposed over the bars.

An alternate form of color bars is the 100% Color Bars pattern, or RGB pattern (sometimes called full-field bars), which consists of eight vertical bars of 100% intensity, and does not include the castellation or luminance patterns. Like the SMPTE standard ("75%") pattern, the color order is white, yellow, cyan, green, magenta, red, and blue, but with an additional column of saturated black. This pattern is used to check peak color levels and color saturation as well as color alignment. The 100% pattern is not as common or as useful as the SMPTE standard 75% pattern, but many pieces of test equipment generate both patterns and can be selected to generate either one. Many professional cameras can be set to generate a 100% pattern for calibration to broadcast or recording equipment, especially in a multi-camera installation where all camera signals must match. There is another 75% pattern that consists of the same eight columns as the 100% pattern but at 75% intensity. This pattern is very seldom used. 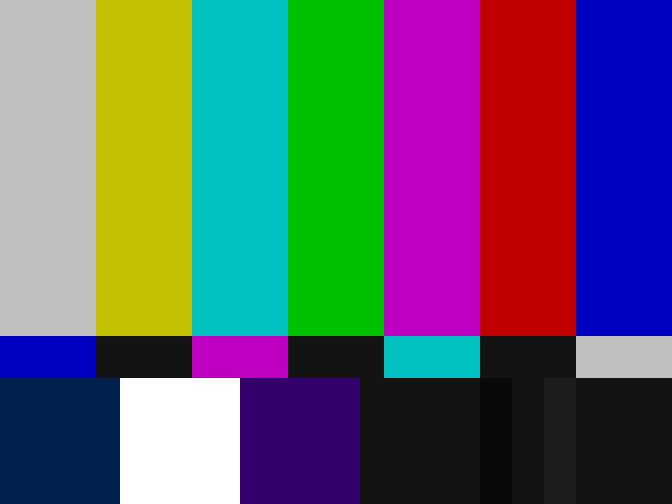