A multi-channel audio cable intended for use with microphone level signals and/or line-level signals.

An audio multicore cable (often colloquially referred to as a multicore, snake cable or snake) is a thick cable which usually contains 4–64 individual audio cables inside a common, sturdy outer jacket. Audio multicore cables are used to convey many audio signals between two locations, such as in audio recording, sound reinforcement, PA systems and broadcasting. Multicores often route many signals from microphones or musical instruments to a mixing console, and can also carry signals from a mixing console back to speakers.

In audio engineering, the term multicore may refer to several things:

Multicores usually create a link between the stage and sound desk or live room and control room. When used in sound reinforcement, the multicore cable runs from the stage box or microphone splitter to the front-of-house sound desk, where it connects to a mixing console. Portable multicore cables stored loose or on a drum, enable sound systems to be set up at temporary outdoor locations such as music festivals. Permanent installations, especially recording studios, use stage boxes mounted in the floor or walls, with the multicore cable running through the ceiling or false floor.

Without a snake, a rock band performing onstage, for example, would require 20 or more individual microphone cables running from the stage to the mixing console (typically located at the rear of a venue). This would be harder to set up, would cause tangled cables, and it would be difficult to identify each cable.

The number of connectors on multicore is often specified by a notation such as "8/4" or "8×4" for 8 sends and 4 returns. Sends usually connect a microphone to a mixing console, and returns connect a mixing console to speakers. A snake with only returns is often called a drive snake.

Some systems use large multipin connectors, colloquially called mults, which make it easier to join snakes together – for example, to connect subsnakes to the main stage box. This allows the system to be expanded by channel count or length. Connectors based on MIL-DTL-5015 (historically MIL-C-5015) are common. Alternatives include EDAC, Burndy, and DB-25 connectors.

While the sound reinforcement industry often uses proprietary premade multicores, the television broadcasting industry uses a standardized 12-channel multicore, with a common 37-pin connector on each end known as DT12. Only 36 pins are used and sometimes the unused pin is omitted. DT12 snakes are commonly built into sports venues and stadiums for easy connection of outside broadcasting trucks.

A subsnake usually refers to a smaller multicore cable, or one not connected directly to the mixing console.:272 Subsnakes may be used to connect a few instruments from one side of the stage to the main snake, which is neater and allows for shorter patch cables. Subsnakes use smaller stage boxes called drop boxes.

Composite multicores combine different types of signals in the one cable. They may contain coaxial cores for video, twisted pair for data or low voltage cores for mains power. Composite multicores are usually used to connect professional video cameras, but they are now gaining usage in live event support with the introduction of the Yamaha PM1D which uses a composite cable to connect it to the stage box.

An audio multicore may also function as a type of breakout cable, sometimes referred to as a fan or some variation, if it has a compound (multipin) connector on one end and individual connectors on the other. This is more common in short multicores meant for in-studio connections, such as audio engines, analog-to-digital converters or digital mixing consoles. Multicore cables may also connect to either the front or back of patch panels when the patch panel is used as an access point or breakout box for connecting external inputs and outputs. 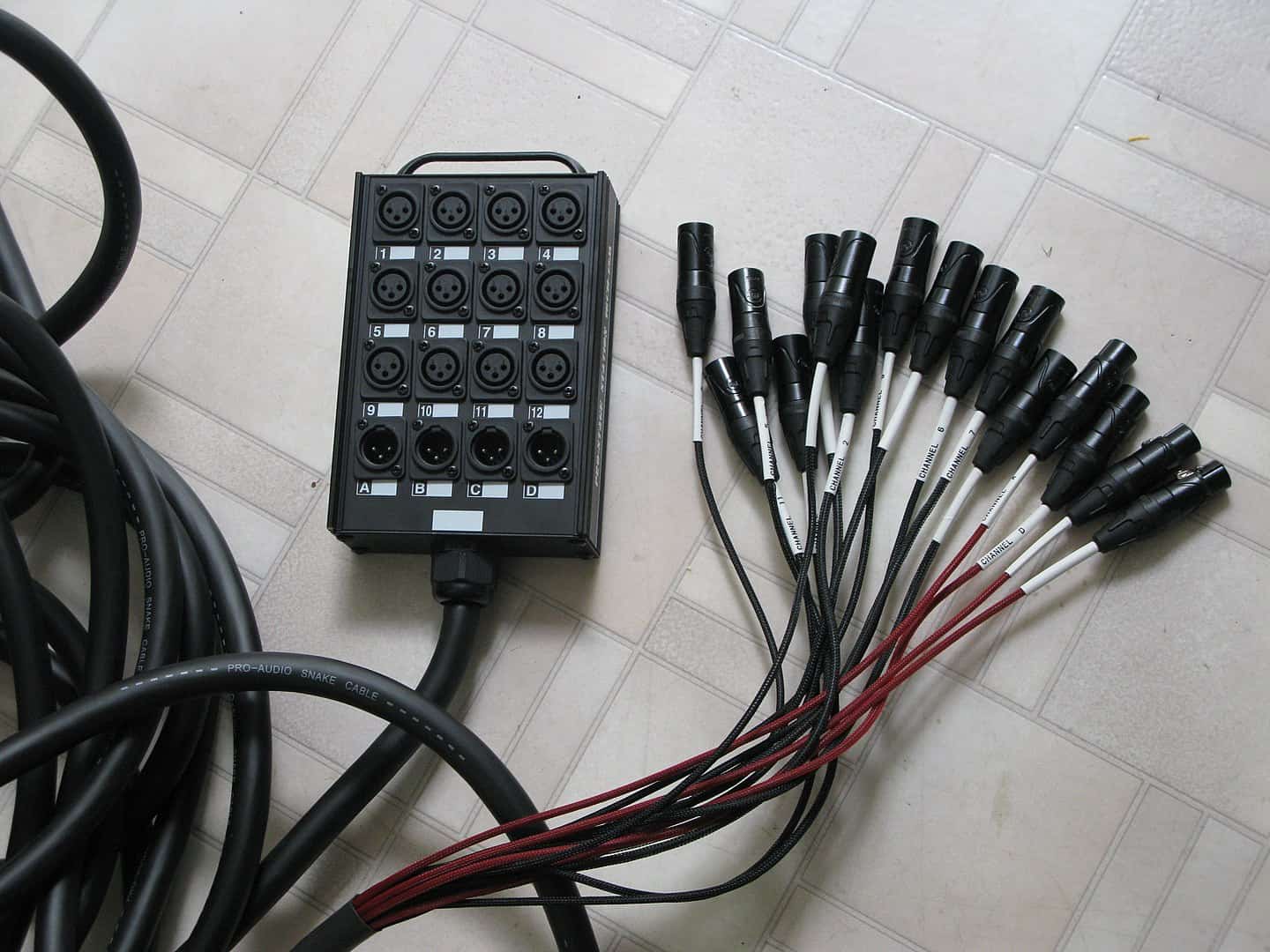 Snake
also known as
see also
resources
source
Adapted from content published on wikipedia.org
Last modified on July 14, 2019, 1:04 am
previous
next
Videocide.com is a service provided by Codecide, a company located in Chicago, IL USA.