Sony Dynamic Digital Sound System. A film sound format which encodes eight tracks of digital audio outside of the sprocket holes on both edges of a film print.

Sony Dynamic Digital Sound is a cinema sound system developed by Sony, from which compressed digital sound information is recorded on both outer edges of the 35 mm film release print. The system supports up to eight independent channels of sound: five front channels, two surround channels and a single sub-bass channel. The eight channel arrangement is similar to large format film magnetic sound formats like Cinerama and Cinemiracle. The five front channels are useful for very large cinema auditoriums where the angular distance between center and left/right channels may be considerable. SDDS decoders provide the ability to downmix to fewer channels if required.

The SDDS reader is mounted on top of a 35mm projector. The film is threaded through the reader before it passes through the picture aperture. As the film runs, red LEDs are used to illuminate the SDDS soundtrack. CCDs (Charge-Coupled Devices) read the SDDS data and convert the stream of dots on the film into digital information. This information is pre-processed in the reader and passed on to the SDDS decoder.

The SDDS decoder is installed in the sound equipment rack. The decoder receives the information from the reader and translates it into audio signals routed to the cinema's power amplifiers. The decoder is responsible for a series of processes that must be performed before the audio is recovered. Next, errors caused by scratches or damage to the film are corrected using redundant error recovery data. Since SDDS is read at the top of the projector, the data is delayed slightly to restore synchronization with the picture. And finally, adjustments in tonal balance and playback level are made to match the specific auditorium's sound system and acoustics. SDDS is designed to process sound entirely in the digital domain, bypassing any existing analog processor, preserving clarity and providing full dynamic range. 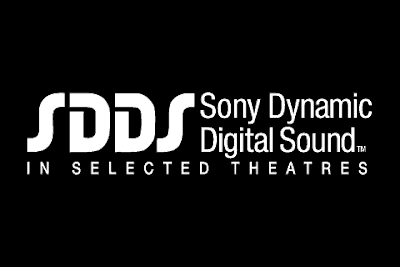