Mag dubber
A device for the recording and playback of film sound that is recorded on magnetic film.

A sound follower, also referred to as separate magnetic, sepmag, magnetic film recorder, or mag dubber is a device for the recording and playback of film sound that is recorded on magnetic film. This device is locked or synchronized with the motion picture film containing the picture. A sound follower operates like an analog reel-to-reel audio tape recording but using film, not magnetic tape. The unit can be switched from manual control to sync control, where it will follow the film with a picture.

Many motion picture cameras do not record audio sound on the film, so in professional film production, there is a need to have the sound recorded and played back on a device that has a double-system recording to tapes, or by any means, for example, DAT or Nagra, SD or other audio recording media and then transferred to 16mm or 35mm sprocketed magnetic film. The sound recording would then be synchronized with a movie projector or a telecine. Either 35mm film or 16mm film that is fully coated with a magnetic material can be locked, sprocket hole by sprocket hole, to the film with the picture image. On the set, a clapperboard is used to mark the spot where the sound and picture will later be aligned in editing.

Typical sound followers lock to the power line using a sync motor and toothed timing belts, or by using 240 Hz bi-phase interlocking pulse signals to sync sound to film. The 240 Hz bi-phase is ten times the 24-frame rate. Sound followers are found in many post-production studios for record and playback and in a movie theater for sound playback. In telecine use, the 24 frames per second are slowed to 23.976 frames/s to lock to SDTV and some HDTV standards, thus the digital bi-phase pulse is 239.76 Hz.

By having the sound and picture sync this way this clearly saves the expense and time of making an optical print or magnetic soundtrack strip on the edge of the film. The Sepmag would follow a projector or a telecine or a hand-cranked or motorized film viewer on a workbench. The sepmag sound follower would stay in sync with the film. In post-production work, a dubbed soundtrack of sound effects, or a second language, could be added to other channels of the sepmag.

Sepmag had different record head configurations. A device could have a single mono track, dual two-track or 4 track. The tracks are very large and the magnetic film moving at the normal speed of 24 frames per second, gave very good sound reproduction. As such, a mixing studio would have many units, to mix all the sound and effect down to 4, 2, and one track as needed.

The magnetic film used is 3 to 5 mils thick, the same as the picture film, so the picture and sound have equal diameters on the film reels. The magnetic film has a magnetic oxide coating on the complete width of the film. and the standard monaural track in 16mm and 35mm is 200 mils wide. 35mm mag films may not be fully coated, but "striped" to permit editing marks to show through both sides. The first films used were acetate base till 1970, then replaced by the polyester base. Acetate base is unstable, can have degradation, the ferric oxide coating, and the Acetate base can cause vinegar degradation.

In 1914, the first SEPMAG patent was filed. In 1929, the first sound follower was on the market and by 1941, AC biasing models were sold, giving better sound quality. The Stille SEPMAG transport was one of the first SEPMAG systems. Some of the older sound followers' interlock speeds were too slow to keep up with the high-speed shuttle speeds of modern telecines; therefore, some 240 Hz bi-phase buffers were made to help solve this problem. 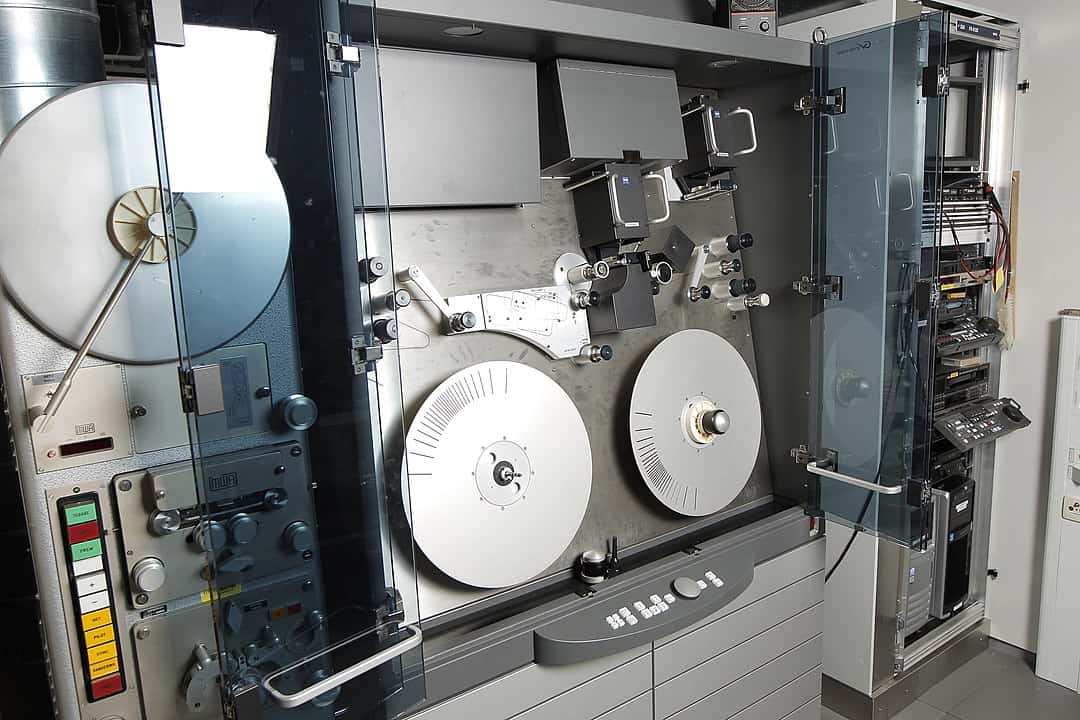 Sound follower
also known as
see also
source
Adapted from content published on wikipedia.org
credit
Last modified on August 14, 2020, 7:14 am
previous
next
Videocide.com is a service provided by Codecide, a company located in Chicago, IL USA.