Sound recordist
The person responsible for capturing sound as it plays out live, determining microphone types and placement.

A production sound mixer, location sound recordist, location sound engineer or simply sound mixer is the member of a film crew or television crew responsible for recording all sound recording on set during the filmmaking or television production using professional audio equipment, for later inclusion in the finished product, or for reference to be used by the sound designer, sound effects editors, or foley artists (aka foley dancers). This requires choice and deployment of microphones, choice of recording media, and mixing of audio signals in real-time.

Usually, the recordist will arrive on location with his/her own equipment, which normally includes microphones, radio systems, booms, mixing desk, audio storage, headphones, cables, tools, and a paper or computer sound logs. The recordist may be asked to capture a wide variety of wild sound on location, and must also consider the format of the finished product (mono, stereo or multi-channels). The recorded production sound track is later combined with other elements, i.e. effects, music, narration, foley or re-recorded dialog by automatic dialogue replacement (ADR).

Often, when taping on video, the sound recordist may record (single system) audio directly onto the camera rather than use a separate medium (double system), although a separate copy is often made, as it both provides an extra copy which may have more tracks and also may include other sound captured without the camera.

The sound mixer is considered a department head, and is thus completely responsible for all aspects of production sound including the hiring of a boom operator and utility sound technician, planning the technical setup involving sound including both sound equipment and ancillary devices involved in syncing and time offsets, anticipating and discussing sound-related problems with the rest of the crew, and ordering and preparing the sound equipment to be used on the set. 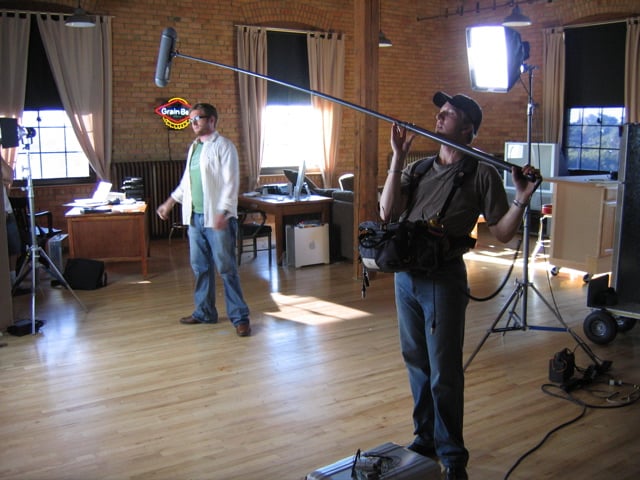 Sound Mixer
also known as
see also
source
Adapted from content published on wikipedia.org
credits
Last modified on July 15, 2019, 8:49 am
previous
next
Videocide.com is a service provided by Codecide, a company located in Chicago, IL USA.