A class of sound film processes where the sound accompanying a picture is recorded onto photographic film, usually, but not always, the same strip of the film carrying the picture.

Sound-on-film is a class of sound film processes where the sound accompanying a picture is recorded onto photographic film, usually, but not always, the same strip of the film carrying the picture. Sound-on-film processes can either record an analog soundtrack or digital soundtrack and may record the signal either optically or magnetically. Earlier technologies were sound-on-disc, meaning the film's soundtrack would be on a separate phonograph record.

The most prevalent current method of recording analog sound on a film print is by stereo variable-area (SVA) recording, a technique first used in the mid-1970s as Dolby Stereo. A two-channel audio signal is recorded as a pair of lines running parallel with the film's direction of travel through the projector's screen. The lines change area (grow broader or narrower) depending on the magnitude of the signal. The projector shines light from a small lamp, called an exciter, through a perpendicular slit onto the film. The image on the small slice of exposed track modulates the intensity of the light, which is collected by a photosensitive element: a photocell, a photodiode or CCD.

In the early years of the 21st century, distributors changed to using cyan dye optical soundtracks on color stocks instead of applicated tracks, which use environmentally unfriendly chemicals to retain a silver (black-and-white) soundtrack. Because traditional incandescent exciter lamps produce copious amounts of infra-red light, and cyan tracks do not absorb infra-red light, this change has required theaters to replace the incandescent exciter lamp with a complementary colored red LED or laser. These LED or laser exciters are backward-compatible with older tracks.

Earlier processes, used on 70 mm film prints and special presentations of 35 mm film prints, recorded sound magnetically on ferric oxide tracks bonded to the film print, outside the sprocket holes. 16 mm and Super 8 formats sometimes used a similar magnetic track on the camera film, bonded to one side of the film on which the sprocket holes had not been punched ("single perforated") for the purpose. Film of this form is no longer manufactured, but single-perforated film without the magnetic track (allowing an optical soundtrack) or, in the case of 16 mm, utilizing the soundtrack area for a wider picture (Super 16 format) is readily available.

Three different digital soundtrack systems for 35 mm cinema release prints were introduced during the 1990s. They are Dolby Digital, which is stored between the perforations on the sound side; SDDS, stored in two redundant strips along the outside edges (beyond the perforations); and DTS, in which sound data is stored on separate compact discs synchronized by a timecode track on the film just to the right of the analog soundtrack and left of the frame (Sound-on-disc). Because these soundtrack systems appear on different parts of the print, one movie can contain all of them, allowing broad distribution without regard for the sound system installed at individual theatres. 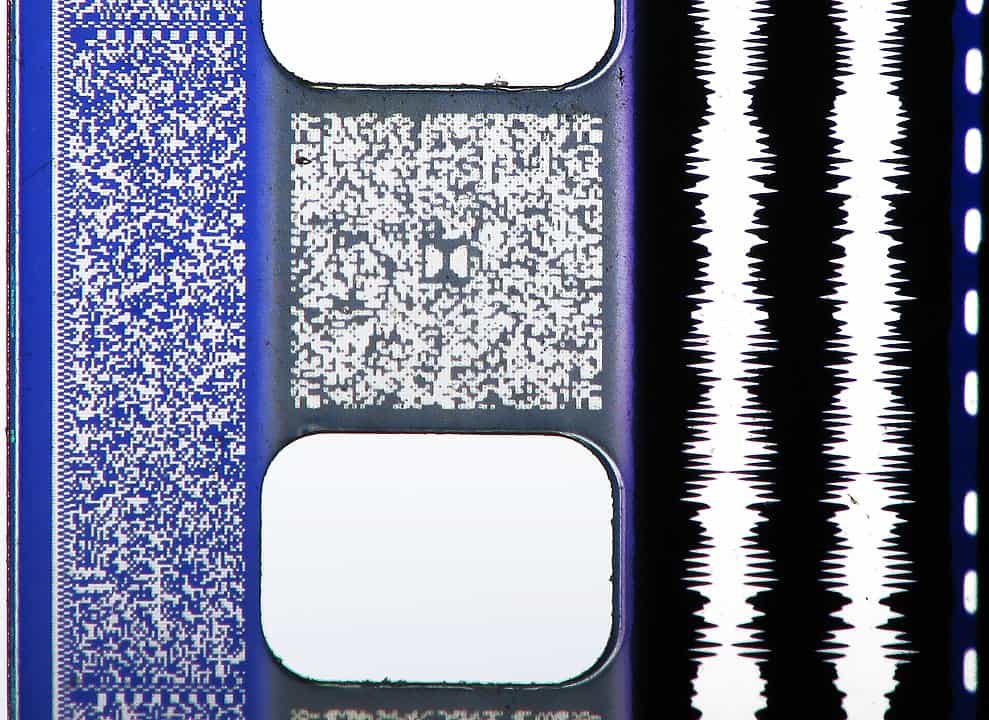 Sound-on-film
see also
source
Adapted from content published on wikipedia.org
credit
Last modified on August 12, 2020, 2:21 am
previous
next
Videocide.com is a service provided by Codecide, a company located in Chicago, IL USA.