A type of aberration found in optical systems that use elements with spherical surfaces, such as a photographic lens.

Spherical aberration is a type of aberration found in optical systems that use elements with spherical surfaces. Lenses and curved mirrors are most often made with surfaces that are spherical because this shape is easier to form than non-spherical curved surfaces. Light rays that strike a spherical surface off-center are refracted or reflected more or less than those that strike close to the center. This deviation reduces the quality of images produced by optical systems.

The aspherical lens has an aplanatic point (i.e., no spherical aberration) only at a radius that equals the radius of the sphere divided by the index of refraction of the lens material. A typical value of the refractive index for crown glass is 1.5 (see list), which indicates that only about 43% of the area (67% of diameter) of a spherical lens is useful. It is often considered to be an imperfection of telescopes and other instruments which makes their focusing less than ideal due to the spherical shape of lenses and mirrors. This is an important effect because spherical shapes are much easier to produce than aspherical ones. In many cases, it is cheaper to use multiple spherical elements to compensate for spherical aberration than it is to use a single aspheric lens. 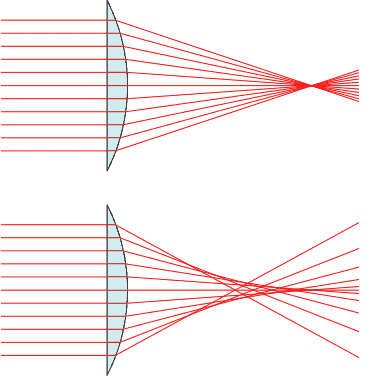 Spherical aberration
see also
source
Adapted from content published on wikipedia.org
credit
Last modified on July 31, 2020, 12:03 am
previous
next
Videocide.com is a service provided by Codecide, a company located in Chicago, IL USA.