A flying camera stabilizer (often comprised of an arm, vest, and sled) that enables cinematographers to get smooth moving shots.

Steadicam is a brand of camera stabilizer mounts for motion picture cameras invented by Garrett Brown and introduced in 1975 by Cinema Products Corporation. It mechanically isolates the operator's movement, allowing for a smooth shot, even when the camera moves over an irregular surface.

The operator wears a harness, the Steadicam vest, which is attached to an iso-elastic arm. This is connected by a multiaxis and ultra-low friction gimbal to the Steadicam "sled" which has the camera mounted at one end and counterbalancing weight (the monitor and batteries) at the other. The monitor substitutes for the camera's viewfinder, since the range of motion of the camera relative to the operator makes the camera's own viewfinder unusable. In the film industry the armature and weight are traditionally called the sled, as the two units combined resembled a sled in an early model of the Steadicam. The sled includes the top stage where the camera is attached, the post which in most models can be extended, with the monitor and batteries at the bottom to counterbalance the camera weight. This is how the Steadicam stays upright, by simply making the bottom slightly heavier than the top, pivoting at the gimbal. This leaves the center of gravity of the whole rig, however heavy it may be, exactly at the operator's fingertip, allowing deft and finite control of the whole system with the lightest of touches on the gimbal. The skill of the operator is to keep the desired framing and composition by feathering his touch on the gimbal, while the rig and operator is in motion, and, indeed, when still.

The combined weight of the counterbalance and camera means that the armature bears a relatively high inertial mass which is not easily moved by small body movements from the operator (much as it is difficult to quickly shake a bowling ball). The freely pivoting armature adds additional stabilization to the photographed image, and makes the weight of the camera-sled assembly acceptable by allowing the body harness to support it.

When the armature is correctly adjusted, operators can remove their hands from the Steadicam entirely and the camera stays in place. During operation, the operator usually rests a hand on the camera gimbal and applies force at that point to move the camera. To avoid shaking the camera when lens adjustments are made, a wireless remote operated by the camera assistant is used to control focus and iris.

For low-angle shots, the Steadicam sled can be inverted vertically, putting the camera on the bottom, and the monitor and batteries on the top. This is referred to as low mode operation.

The newest generation is the Tango. A body-supported camera-stabilization-system, its horizontal mechanism makes it possible to move the camera freely while staying horizontal. A Steadicam operator can change from low mode to high mode without any alteration. Dimensions are not limited to ups and downs, but also in depth and over or through obstacles.

The smallest, lightest Steadicam that can be used with a support arm and vest is the Merlin. It is light enough to be hand held with cameras weighing up to about 5.5 pounds (2.5 kg), and may carry cameras up to about 7 pounds (3.2 kg) when used with the arm. The Merlin may be folded and carried in comparatively small spaces such as medium-size camera bags. In its lightest configuration, the Merlin weighs just 12.5 ounces (0.35 kg). Photographers who shoot with HDSLR cameras that combine still and motion photography most often work with the Merlin. Since the Merlin has no facility to carry a separate monitor, cameras suitable for it must have built-in monitors.

Steadicam introduced a camera mount for smartphones, called the Smoothee, in 2012. Marketed to consumers instead of video professionals, its tubular frame supports iPhone and Android phones that are 4.53" to 6.26" long by 2.32" to 3.27" wide (115 to 159 mm long by 59 to 83 mm wide). An adapter can be used to fit a GoPro camera to it. An even smaller, camera-specific Steadicam Curve (a single, curved aluminum slash) is available for GoPro cameras. It is also marketed to consumers. 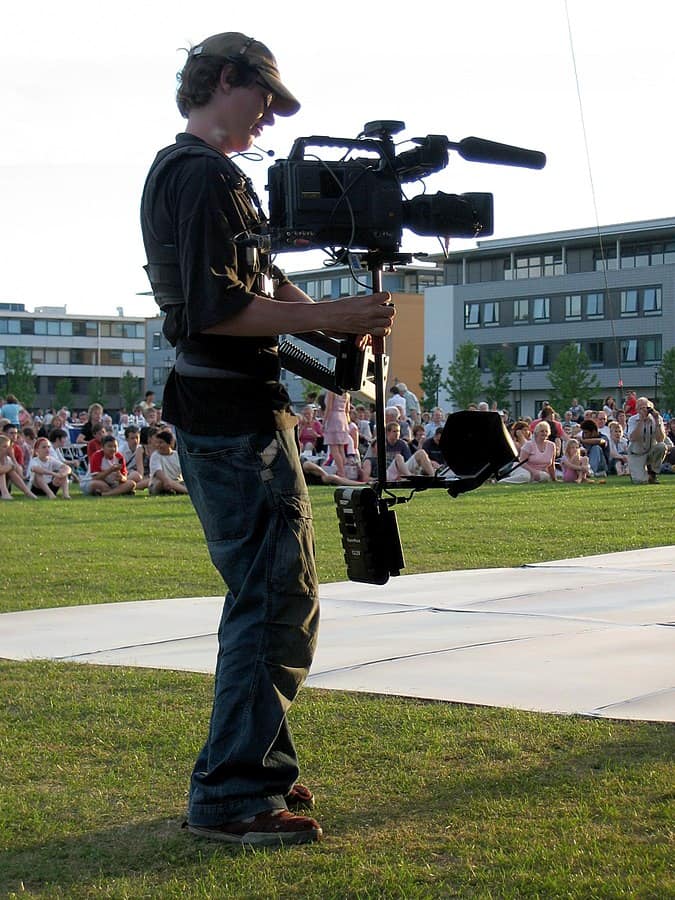 Steadicam
see also
source
Adapted from content published on wikipedia.org
Last modified on June 1, 2019, 8:50 am
previous
next
Videocide.com is a service provided by Codecide, a company located in Chicago, IL USA.