Sound that is reproduced through speakers above or behind the audience.

Surround sound is a technique for enriching the fidelity and depth of sound reproduction by using multiple audio channels from speakers that surround the listener (surround channels). Its first application was in movie theaters. Prior to surround sound, theater sound systems commonly had three "screen channels" of sound, from loudspeakers located in front of the audience at the left, center, and right. Surround sound adds one or more channels from loudspeakers behind the listener, able to create the sensation of sound coming from any horizontal direction 360° around the listener. Surround sound formats vary in reproduction and recording methods along with the number and positioning of additional channels. The most common surround sound specification, the ITU's 5.1 standard, calls for 6 speakers: Center (C) in front of the listener, Left (L) and Right (R) at angles of 60° on either side of the center, and Left Surround (LS) and Right Surround (RS) at angles of 100–120°, plus a subwoofer whose position is not critical.

Surround sound typically has a listener location or sweet spot where the audio effects work best, and presents a fixed or forward perspective of the sound field to the listener at this location. The technique enhances the perception of sound spatialization by exploiting sound localization; a listener's ability to identify the location or origin of a detected sound in direction and distance. This is achieved by using multiple discrete audio channels routed to an array of loudspeakers.

Types of media and technologies

Most surround sound recordings are created by film production companies or video game producers; however some consumer camcorders have such capability either built-in or available separately. Surround sound technologies can also be used in music to enable new methods of artistic expression. After the failure of quadraphonic audio in the 1970s, multichannel music has slowly been reintroduced since 1999 with the help of SACD and DVD-Audio formats. Some AV receivers, stereophonic systems, and computer soundcards contain integral digital signal processors and/or digital audio processors to simulate surround sound from a stereophonic source (see fake stereo).

In 1967, the rock group Pink Floyd performed the first-ever surround sound concert at "Games for May", a lavish affair at London’s Queen Elizabeth Hall where the band debuted its custom-made quadraphonic speaker system. The control device they had made, the Azimuth Co-ordinator, is now displayed at London's Victoria and Albert Museum, as part of their Theatre Collections gallery.

The first documented use of surround sound was in 1940, for the Disney studio's animated film Fantasia. Walt Disney was inspired by Nikolai Rimsky-Korsakov's operatic piece Flight of the Bumblebee to have a bumblebee featured in his musical Fantasia and also sound as if it was flying in all parts of the theatre. The initial multichannel audio application was called 'Fantasound', comprising three audio channels and speakers. The sound was diffused throughout the cinema, controlled by an engineer using some 54 loudspeakers. The surround sound was achieved using the sum and the difference of the phase of the sound. However, this experimental use of surround sound was excluded from the film in later showings. In 1952, "surround sound" successfully reappeared with the film "This is Cinerama", using discrete seven-channel sound, and the race to develop other surround sound methods took off.

In 1957, working with artist Jordan Belson, Henry Jacobs produced Vortex: Experiments in Sound and Light - a series of concerts featuring new music, including some of Jacobs' own, and that of Karlheinz Stockhausen, and many others - taking place in the Morrison Planetarium in Golden Gate Park, San Francisco. Sound designers commonly regard this as the origin of the (now standard) concept of "surround sound." The program was popular, and Jacobs and Belson were invited to reproduce it at the 1958 World Expo in Brussels. There are also many other composers that created ground-breaking surround sound works in the same time period.

In 1978, a concept devised by Max Bell for Dolby Laboratories called "split surround" was tested with the movie Superman. This led to the 70mm stereo surround release of Apocalypse Now, which became one of the first formal releases in cinemas with three channels in the front and two in the rear. There were typically five speakers behind the screens of 70mm-capable cinemas, but only the Left, Center and Right were used full-frequency, while Center-Left and Center-Right were only used for bass-frequencies (as it is currently common). The Apocalypse Now encoder/decoder was designed by Michael Karagosian, also for Dolby Laboratories. The surround mix was produced by an Oscar-winning crew led by Walter Murch for American Zoetrope. The format was also deployed in 1982 with the stereo surround release of Blade Runner.

The 5.1 version of surround sound originated in 1987 at the famous French Cabaret Moulin Rouge. A French engineer, Dominique Bertrand used a mixing board specially designed in cooperation with Solid State Logic, based on 5000 series and including six channels. Respectively: A left, B right, C centre, D left rear, E right rear, F bass. The same engineer had already achieved a 3.1 system in 1974, for the International Summit of Francophone States in Dakar, Senegal.

Surround sound is created in several ways. The first and simplest method is using a surround sound recording technique—capturing two distinct stereo images, one for the front and one for the back or by using a dedicated setup, e.g. an augmented Decca tree —and/or mixing-in surround sound for playback on an audio system using speakers encircling the listener to play audio from different directions. A second approach is processing the audio with psychoacoustic sound localization methods to simulate a two-dimensional (2-D) sound field with headphones. A third approach, based on Huygens' principle, attempts reconstructing the recorded sound field wave fronts within the listening space; an "audio hologram" form. One form, wave field synthesis (WFS), produces a sound field with an even error field over the entire area. Commercial WFS systems, currently marketed by companies sonic emotion and Iosono, require many loudspeakers and significant computing power.

The Ambisonics form, also based on Huygens' principle, gives an exact sound reconstruction at the central point; less accurate away from center point. There are many free and commercial software programs available for Ambisonics, which dominates most of the consumer market, especially musicians using electronic and computer music. Moreover, Ambisonics products are the standard in surround sound hardware sold by Meridian Audio. In its simplest form, Ambisonics consumes few resources, however this is not true for recent developments, such as Near Field Compensated Higher Order Ambisonics. Some years ago it was shown that, in the limit, WFS and Ambisonics converge.

Finally, surround sound can also be achieved by mastering level, from stereophonic sources as with Penteo, which uses Digital Signal Processing analysis of a stereo recording to parse out individual sounds to component panorama positions, then positions them, accordingly, into a five-channel field. However, there are more ways to create surround sound out of stereo, for instance with the routines based on QS and SQ for encoding Quad sound, where instruments were divided over 4 speakers in the studio. This way of creating surround with software routines is normally referred to as "upmixing,", which was particularly successful on the Sansui QSD-series decoders that had a mode where it mapped the L ↔ R stereo onto an ∩ arc. 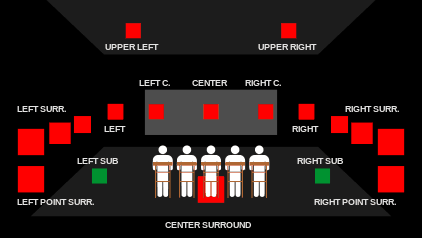 Surround sound
see also
resources
source
Adapted from content published on wikipedia.org
Last modified on July 18, 2019, 2:21 am
previous
next
Videocide.com is a service provided by Codecide, a company located in Chicago, IL USA.