Techniscope or 2-perf is a 35 mm motion picture camera film format introduced by Technicolor Italia in 1960. The Techniscope format uses a two film-perforation negative pulldown per frame, instead of the standard four-perforation frame usually exposed in 35 mm film photography. Techniscope's 2.33:1 aspect ratio is easily cropped to the 2.39:1 widescreen ratio, because it uses half the amount of 35 mm film stock and standard spherical lenses. Thus, Techniscope release prints are made by anamorphosizing and enlarging each frame by a factor of two.

During its primary reign of 1960–1980, more than 350 films were photographed in Techniscope, the first of which was The Pharaoh's Woman, released 10 December 1960. Given its considerable savings in production cost but lesser image quality, Techniscope was primarily an alternative format used by low-budget filmmakers, mainly in the horror and western genres. Since the format originated in Italy, most Techniscope format films were European productions.

In the U.S., Techniscope was used in the low-budget A.C. Lyles Westerns for Paramount Pictures, as well as in a few Metro-Goldwyn-Mayer pictures as well, and Universal Studios briefly used it extensively in the mid to late 1960s. Producer Sid Pink recalled that unlike Europe, the American film studios were charged by the Technicolor company for using Techniscope in their film prints. George Lucas shot his first two features, THX 1138 and American Graffiti, in Techniscope in order to give them a gritty, documentary-like feel.

Regarding the diminished image quality, film reviewer Roger Ebert wrote about the film Counterpoint (1968): "The movie is shot in Techniscope, a process designed to give a wide-screen picture while saving film and avoiding payment of royalties to the patented processes like Panavision. In this film, as in 'Harry Frigg', Techniscope causes washed-out color and a loss of detail. Universal shouldn't be so cheap."

Techniscope employs standard 35 mm camera films, which are suitable for 2-perf (Techniscope), 3-perf, conventional 4-perf (spherical or CinemaScope), and even 6-perf (Cinerama) and 8-perf (VistaVision), as all of those processes listed employ the same camera and intermediate films, and positive print films intended for the direct projection (although 2-, 3- and 8-perfs are not distribution formats).

In 1999, in Australia, MovieLab film laboratory owner Kelvin Crumplin revived the Techniscope format renamed as MultiVision 235, attempting to commercialize it as a cinematography format alternative to the Super 16 mm format. His proposition was that it yielded a 35 mm-quality image (from which could be derived natural 2.35:1 and 1.85:1 aspect ratio images) for the same cost as Super 16 mm cinematography.

Factory-made kits for certain Mitchell and Mitchell-derived cameras are occasionally available on auction sites. In the specific case of a Mitchell, the kit includes a replacement aperture plate and cam for the film movement, a replacement gear for the camera body, and, for a reflex camera, a replacement focusing screen. As all Mitchell cameras incorporate the provision for a "hard mask" within the movement itself, it is often possible to keep the 4-perf aperture plate and insert a 2-perf mask in the mask slot, as an economy measure.

In 2011, Lomography released a movie camera, the Lomokino, capable of making short movies on standard 35 mm still photography film which uses a frame format similar to Techniscope, with two perforations for each exposure, though with no space or capabilities for the soundtrack, taking 144 frames on a 36 exposures roll. The camera is erroneously labeled as being "Super 35", Super 35 having three perforations per frame. Movies made with the Lomokino may not show properly without modifications on Techniscope projectors, the Lomokino is hand-cranked and the frame rate is controlled manually, usually being around 2-6 FPS. 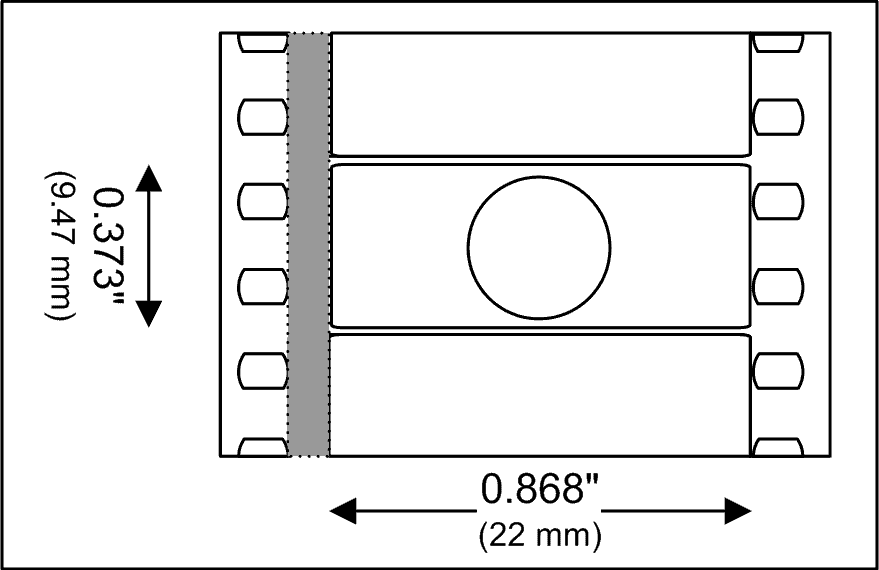