The process of transferring motion picture film into video and is performed in a color suite.

Telecine (/ˈtɛləsɪni/ or /ˌtɛləˈsɪniː/) is the process of transferring motion picture film into video and is performed in a color suite. The term is also used to refer to the equipment used in the post-production process. Telecine enables a motion picture, captured originally on film stock, to be viewed with standard video equipment, such as television sets, video cassette recorders (VCR), DVD, Blu-ray Disc or computers. Initially, this allowed television broadcasters to produce programs using film, usually 16mm stock, but transmit them in the same format, and quality, as other forms of television production. Furthermore, telecine allows film producers, television producers and film distributors working in the film industry to release their products on video and allows producers to use video production equipment to complete their filmmaking projects. Within the film industry, it is also referred to as a TK, because TC is already used to designate timecode.

With the advent of popular broadcast television, producers realized they needed more than live television programming. By turning to film-originated material, they would have access to the wealth of films made for the cinema in addition to record television programming on film that could be aired at different times. However, the difference in frame rates between film (generally 24 frames/s) and television (30 or 25 frames/s, interlaced) meant that simply playing a film into a television camera would result in flickering.

Originally the kinescope was used to record the image from a television display to film, synchronized to the TV scan rate. This could then be re-played directly into a video camera for re-display. Non-live programming could also be filmed using the same cameras, edited mechanically as normal, and then played back for TV. As the film was run at the same speed as the television, the flickering was eliminated. Various displays, including projectors for these "video rate films", slide projectors and film cameras were often combined into a "film chain", allowing the broadcaster to cue up various forms of media and switch between them by moving a mirror or prism. Color was supported by using a multi-tube video camera, prisms, and filters to separate the original color signal and feed the red, green and blue to individual tubes.

However, this still left film shot at cinema frame rates as a problem. The obvious solution is to simply speed up the film to match the television frame rates, but this, at least in the case of NTSC, is rather obvious to the eye and ear. This problem is not difficult to fix, however; the solution being to periodically play a selected frame twice. For NTSC, the difference in frame rates can be corrected by showing every fourth frame of film twice, although this does require the sound to be handled separately to avoid "skipping" effects. A more convincing technique is to use "2:3 pulldown", discussed below, which turns every second frame of the film into three fields of video, which results in a much smoother display. PAL uses a similar system, "2:2 pulldown". However, during the analog broadcasting period, the 24 frames per second film were shown at a slightly faster 25 frames per second rate, to match the PAL video signal. This resulted in a fractionally higher audio soundtrack and resulted in feature films having a slightly shorter duration, by being shown 1 frame per second faster.

In recent decades, telecine has primarily been a film-to-storage process, as opposed to film-to-air. Changes since the 1950s have primarily been in terms of equipment and physical formats; the basic concept remains the same. Home movies originally on film may be transferred to videotape using this technique, and it is not uncommon to find telecined DVDs where the source was originally recorded on videotape. The same is not true for modern DVDs of cinematic films, which are generally recorded in their original frame rate—in these cases the DVD player itself applies telecining as required to match the capabilities of the television receiver. 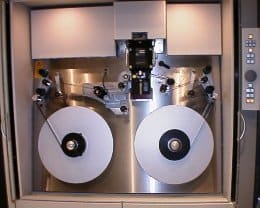