A device for displaying large, readable text on a partially transparent screen for video production.

A teleprompter is a display device that prompts the person speaking with an electronic visual text of a speech or script. Using a teleprompter is similar to using cue cards. The screen is in front of, and usually below, the lens of a professional video camera and the words on the screen are reflected in the eyes of the presenter using a sheet of clear glass or a specially prepared beam splitter. Light from the performer passes through the front side of the glass into the lens, while a shroud surrounding the lens and the backside of the glass prevents unwanted light from entering the lens. Mechanically this works in a very similar way to the "Pepper's Ghost" illusion from the classic theatre - an image viewable from one angle but not another - and the concept may have similar origins.

Because the speaker does not need to look down to consult written notes, the teleprompter creates the illusion that the speaker has memorized the speech or is speaking spontaneously, looking directly into the camera lens. Cue cards, on the other hand, are always placed away from the lens axis, making the speaker look at a point beside the camera, which leaves an impression of distraction.

From the first mechanical paper roll teleprompters used by television presenters and speakers at U.S. political conventions in 1952, to dual glass teleprompters used by TV presenters and for U.S. conventions in 1964, to the computer-based rolls of 1982 and the four-prompter system for U.S. conventions which added a large off-stage confidence monitor and inset lectern monitor in 1996, to the replacement of glass teleprompters at U.K. political conferences by several large off-stage confidence monitors in 2006, the technology has continued to develop.

The word TelePrompTer, with internal capitalization, originated as a trading name used by the TelePrompTer Company, which first developed the device in the 1950s; it is now a genericized trademark. Autocue, a United Kingdom manufacturer of teleprompters, also finds its trademark used in a generic fashion in Commonwealth countries and some European countries.

U.S. President Lyndon B. Johnson uses a teleprompter while announcing the Civil Rights Act of 1964.

The TelePrompTer Corporation was founded in the 1950s by Fred Barton, Jr., Hubert Schlafly, and Irving Berlin Kahn. Barton was an actor who suggested the concept of the teleprompter as a means of assisting television performers who had to memorize large amounts of material in a short time. Schlafly built the first teleprompter in 1950. It was simply a mechanical device, operated by a hidden technician, located near the camera. The script, in inch-high letters, was printed by a special electric typewriter on a paper scroll, which was advanced as the performer read, and the machines rented for the then-considerable sum of $30 per hour. In 1952 former President Herbert Hoover used a Schlafly-designed speech teleprompter to address the 1952 Republican National Convention in Chicago. U.S. Governor Paul A. Dever spoke at the 1952 Democratic National Convention, also held in Chicago, using a mechanical-roll teleprompter on a long pole held by a TV technician in the convention audience, while the 1952 Republican National Convention used a smaller teleprompter placed in front of the speaker's rostrum. Mechanical prompters were still being used as late as 1992, as was the case with The Tonight Show Starring Johnny Carson.

On January 4, 1954, Dwight Eisenhower was the first President to use a teleprompter for a State of the Union address.

Jess Oppenheimer, who created I Love Lucy and served for its first five years as its producer and head writer, developed the first "in-the-lens" prompter and was awarded U.S. patents for its creation. This system uses a mirror to reflect a script onto a piece of glass placed in front of the camera lens, thus allowing the reader to look directly into the camera. First used by Lucille Ball and Desi Arnaz in 1953 to read commercials on-camera, it soon became a staple of television news and is the primary system used with prompters today. 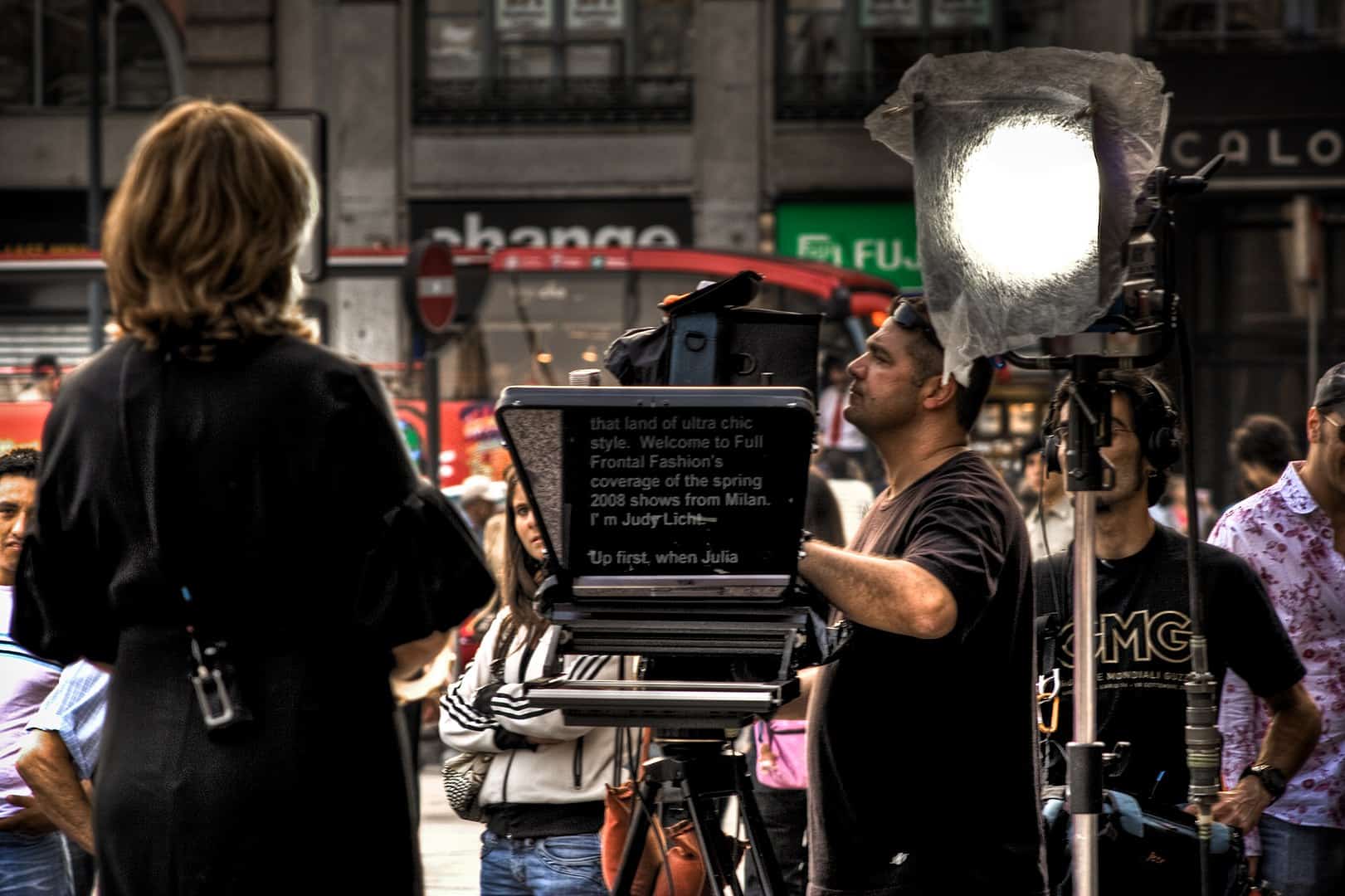