The brand name of a hardware interface developed by Intel (in collaboration with Apple) that allows the connection of external peripherals to a computer.

Thunderbolt is the brand name of a hardware interface developed by Intel (in collaboration with Apple) that allows the connection of external peripherals to a computer. Thunderbolt 1 and 2 use the same connector as Mini DisplayPort (MDP), whereas Thunderbolt 3 re-uses the USB-C connector from USB. It was initially developed and marketed under the name Light Peak, and first sold as part of an end-user product on 24 February 2011.

Thunderbolt combines PCI Express (PCIe) and DisplayPort (DP) into two serial signals and additionally provides DC power, all in one cable. Up to six peripherals may be supported by one connector through various topologies.

Thunderbolt can be implemented on PCIe graphics cards, which have access to DisplayPort data and PCIe connectivity, or on the motherboard of new computers with onboard videos, such as the MacBook Air.

The interface was originally intended to run exclusively on an optical physical layer using components and flexible optical fiber cabling developed by Intel partners and at Intel's Silicon Photonics lab. It was initially marketed under the name Light Peak, and after 2011 as Silicon Photonics Link. However, it was discovered that conventional copper wiring could furnish the desired 10 Gbit/s per channel at a lower cost.

This copper-based version of the Light Peak concept was co-developed by Apple and Intel. Apple registered Thunderbolt as a trademark but later transferred the mark to Intel, which held overriding intellectual-property rights.

Thunderbolt was commercially introduced on Apple's 2011 MacBook Pro, using the same Apple-developed connector as Mini DisplayPort, which is electrically identical to DisplayPort but uses a smaller, non-locking connector. 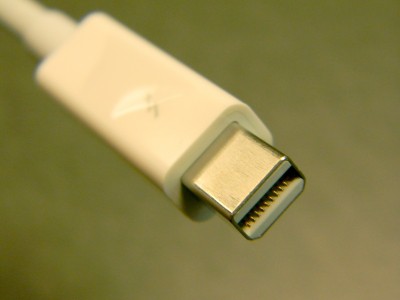