Tristimulus color space is a three-dimensional representation of the human color space. One can picture this space as a region in three-dimensional Euclidean space if one identifies the x, y, and z axes with the stimuli for the long-wavelength (L), medium-wavelength (M), and short-wavelength (S) light receptors. The origin, (S,M,L) = (0,0,0), corresponds to black. White has no definite position in this diagram; rather it is defined according to the color temperature or white balance as desired or as available from ambient lighting. The human color space is a horseshoe-shaped cone such as shown here (see also CIE chromaticity diagram below), extending from the origin to, in principle, infinity. In practice, the human color receptors will be saturated or even be damaged at extremely high light intensities, but such behavior is not part of the CIE color space and neither is the changing color perception at low light levels (see: Kruithof curve). The most saturated colors are located at the outer rim of the region, with brighter colors farther removed from the origin. As far as the responses of the receptors in the eye are concerned, there is no such thing as "brown" or "gray" light. The latter color names refer to orange and white light respectively, with an intensity that is lower than the light from surrounding areas. One can observe this by watching the screen of an overhead projector during a meeting: one sees black lettering on a white background, even though the "black" has in fact not become darker than the white screen on which it is projected before the projector was turned on. The "black" areas have not actually become darker but appear "black" relative to the higher intensity "white" projected onto the screen around it. See also color constancy.

The human tristimulus space has the property that additive mixing of colors corresponds to the adding of vectors in this space. This makes it easy to, for example, describe the possible colors (gamut) that can be constructed from the red, green, and blue primaries in a computer display. 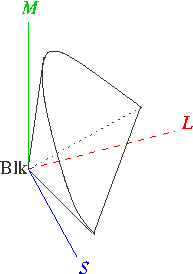