A light bulb that emits light using a filament of tungsten wire, and are larger versions of the everyday lighting found in your home.

An incandescent light bulb, incandescent lamp or incandescent light globe is an electric light with a wire filament heated to such a high temperature that it glows with visible light (incandescence). The filament is protected from oxidation with a glass or fused quartz bulb that is filled with inert gas or a vacuum. In a halogen lamp, filament evaporation is slowed by a chemical process that redeposits metal vapor onto the filament, thereby extending its life.

The light bulb is supplied with electric current by feed-through terminals or wires embedded in the glass. Most bulbs are used in a socket which provides mechanical support and electrical connections.

Incandescent bulbs are manufactured in a wide range of sizes, light output, and voltage ratings, from 1.5 volts to about 300 volts. They require no external regulating equipment, have low manufacturing costs, and work equally well on either alternating current or direct current. As a result, the incandescent bulb is widely used in household and commercial lighting, for portable lighting such as table lamps, car headlamps, and flashlights, and for decorative and advertising lighting.

Incandescent bulbs are much less efficient than other types of electric lighting; incandescent bulbs convert less than 5% of the energy they use into visible light, with standard light bulbs averaging about 2.2%. The remaining energy is converted into heat. The luminous efficacy of a typical incandescent bulb for 120 V operation is 16 lumens per watt, compared with 60 lm/W for a compact fluorescent bulb or 150 lm/W for some white LED lamps.

Some applications of the incandescent bulb (such as heat lamps) deliberately use the heat generated by the filament. Such applications include incubators, brooding boxes for poultry, heat lights for reptile tanks, infrared heating for industrial heating and drying processes, lava lamps, and the Easy-Bake Oven toy. Incandescent bulbs typically have short lifetimes compared with other types of lighting; around 1,000 hours for home light bulbs versus typically 10,000 hours for compact fluorescents and 30,000 hours for lighting LEDs.

Incandescent bulbs have been replaced in many applications by other types of electric light, such as fluorescent lamps, compact fluorescent lamps (CFL), cold cathode fluorescent lamps (CCFL), high-intensity discharge lamps, and light-emitting diode lamps (LED). Some jurisdictions, such as the European Union, China, Canada and United States, are in the process of phasing out the use of incandescent light bulbs while others, including Colombia, Mexico, Cuba, Argentina and Brazil, have prohibited them already.
On 13 December 1904, Hungarian Sándor Just and Croatian Franjo Hanaman were granted a Hungarian patent (No. 34541) for a tungsten filament lamp that lasted longer and gave brighter light than the carbon filament. Tungsten filament lamps were first marketed by the Hungarian company Tungsram in 1904. This type is often called Tungsram-bulbs in many European countries. Filling a bulb with an inert gas such as argon or nitrogen slows down the evaporation of the tungsten filament compared to operating it in a vacuum. This allows for greater temperatures and therefore greater efficacy with less reduction in filament life.

In 1913, Irving Langmuir found that filling a lamp with inert gas instead of a vacuum resulted in twice the luminous efficacy and reduction of bulb blackening.

Between 1924 and the outbreak of the Second World War, the Phoebus cartel attempted to fix prices and sales quotas for bulb manufacturers outside of North America.

In 1930, Hungarian Imre Bródy filled lamps with krypton gas rather than argon, and designed a process to obtain krypton from air. Production of krypton filled lamps based on his invention started at Ajka in 1937, in a factory co-designed by Polányi and Hungarian-born physicist Egon Orowan.

By 1964, improvements in efficiency and production of incandescent lamps had reduced the cost of providing a given quantity of light by a factor of thirty, compared with the cost at introduction of Edison's lighting system. 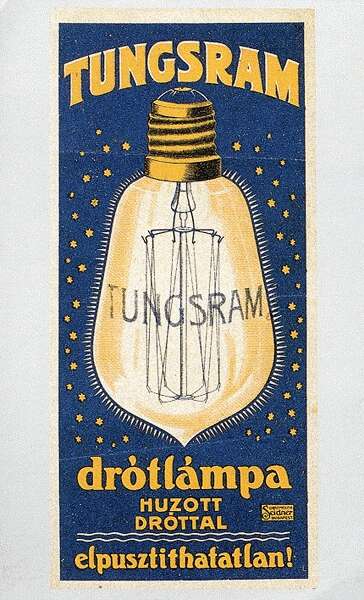