A type of wiring in which two conductors of a single circuit are twisted together for the purposes of improving electromagnetic compatibility.

Twisted pair cabling is a type of wiring in which two conductors of a single circuit are twisted together for the purposes of improving electromagnetic compatibility. Compared to a single conductor or an untwisted balanced pair, a twisted pair reduces electromagnetic radiation from the pair and crosstalk between neighboring pairs and improves rejection of external electromagnetic interference. It was invented by Alexander Graham Bell.

A twisted pair can be used as a balanced line, which as part of a balanced circuit can greatly reduce the effect of noise currents induced on the line by coupling of electric or magnetic fields. The idea is that the currents induced in each of the two wires are very nearly equal. The twisting ensures that the two wires are on average the same distance from the interfering source and are affected equally. The noise thus produces a common-mode signal which can be canceled at the receiver by detecting the difference signal only, the latter being the wanted signal.

Common-mode rejection starts to fail on untwisted wires when the noise source is close to the signal wires; the closer wire will couple with the noise more strongly and the receiver will be unable to eliminate it. This problem is especially apparent in telecommunication cables where pairs in the same cable lie next to each other for many miles. Twisting the pairs counters this effect as on each half twist the wire nearest to the noise-source is exchanged. Provided the interfering source remains uniform, or nearly so, over the distance of a single twist, the induced noise will remain common-mode.

The twist rate (also called the pitch of the twist, usually defined in twists per meter) makes up part of the specification for a given type of cable. When nearby pairs have equal twist rates, the same conductors of the different pairs may repeatedly lie next to each other, partially undoing the benefits of twisting. For this reason, it is commonly specified that, at least for cables containing small numbers of pairs, the twist rates must differ.

In contrast to shielded or foiled twisted pair (typically S/FTP or F/UTP cable shielding), UTP (unshielded twisted pair) cable is not surrounded by any shielding. UTP is the primary wire type for telephone usage and is very common for computer networking. 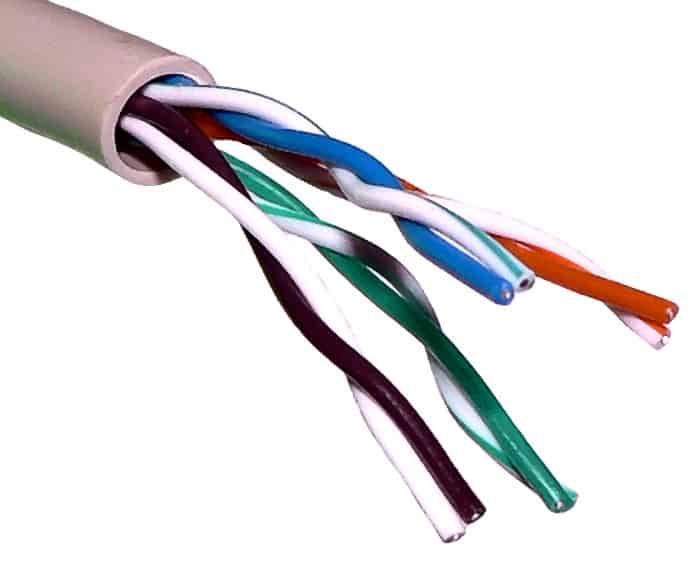 Twisted pair
see also
source
Adapted from content published on wikipedia.org
credit
Last modified on May 31, 2020, 8:18 am
previous
next
Videocide.com is a service provided by Codecide, a company located in Chicago, IL USA.