VHS-C is the compact VHS videocassette format, introduced by Victor Company of Japan (JVC) in 1982, and used primarily for consumer-grade compact analog recording camcorders. The format is based on the same video tape as is used in VHS and can be played back in a standard VHS VCR with an adapter. Though quite inexpensive, the format is largely obsolete even as a consumer standard and has been replaced in the marketplace by digital video formats, which have smaller form factors.

The magnetic tape on VHS-C cassettes is wound on one main spool and used a gear wheel which moves the tape forward. It can also be moved by hand. This development hampered the sales of the Betamax system somewhat because the Betamax cassette geometry prevented a similar development.

VHS-C cassette was larger than Video8 cassette, but was compatible with VHS tape recorders, using a special adapter cassette. The adapter contains a standard full-size engagement hub for the VCR's takeup sprocket, which connected to a gear train to drive the VHS-C cassette takeup gear.

VHS end of the tape is normally detected by a light in the VCR that inserts into the full-size cassette body and detected by sensors in the VCR located at the far outer corners of the front of the cassette. Because the width of VHS-C is narrower than a full-size VHS cassette and does not align with the full-size end of tape sensors, the adapter has a guide roller swing arm to pull the tape out of the VHS-C cartridge out to the far right edge where it would normally be located in a full-size cassette. When the VHS-C cartridge is to be removed from the adapter, a geared retraction system pulls in the excess loose tape when the swing arm retracts.

A higher quality version of VHS-C was released, based on S-VHS, known as S-VHS-C, that competed against Hi8, the higher quality version of Video8. The arrival on the market of inexpensive S-VHS-C camcorders led to the inclusion on many modern VCRs of a feature known as SQPB, or SuperVHS Quasi-PlayBack, but did not make a significant impact on the market as the arrival of MiniDV as a consumer standard made low-cost, digital, near-broadcast quality video widely available to consumers, and rendered analog camcorders largely obsolete.

Compared with Video8, VHS-C had similar video quality but a shorter run time, 90 versus 30 minutes at SP speed (for standard cassettes), 180 versus 60 for longer-running modes. JVC did market 45-minute and 60-minute SP Mode tapes with the Extra High-Grade formulation (135 minutes and 180 minutes in EP/SLP Mode) for a time. Similarly, Video8 spawned a 120-minute version of the cassette (240 minutes in long play).

The later Hi8 and S-VHS-C systems both have a quality similar to the laserdisc system.

Although Video8 acquired a digital variant, Digital8, D-VHS was never adapted to a compact format, as the consumer camcorder industry moved on to small-format MiniDV tapes, then hard-drive- and DVD-based machines, and then solid-state storage. 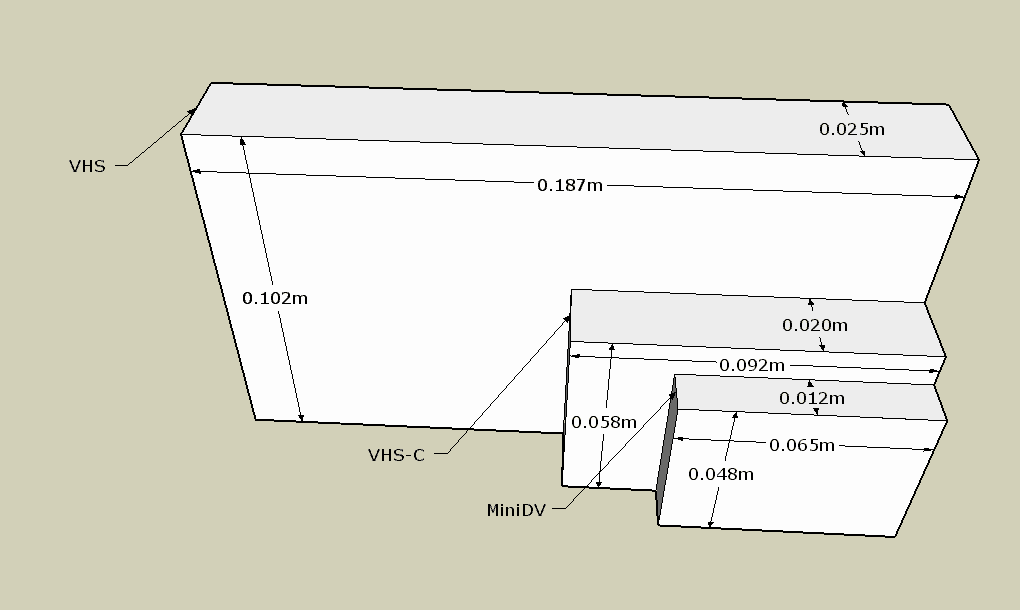