Videoconference
The technologies for the reception and transmission of audio-video signals by users at different locations, for communication between people in real-time.

Videotelephony comprises the technologies for the reception and transmission of audio-video signals by users at different locations, for communication between people in real-time. A videophone is a telephone with a video display, capable of simultaneous video and audio for communication between people in real-time. Videoconferencing implies the use of this technology for a group or organizational meeting rather than for individuals, in a videoconference. Telepresence may refer either to a high-quality videotelephony system (where the goal is to create the illusion that remote participants are in the same room) or to meetup technology, which goes beyond video into robotics (such as moving around the room or physically manipulating objects). Videoconferencing has also been called "visual collaboration" and is a type of groupware.

While the development of video conferencing started in the late 19th century, the technology only became available to the public starting in the 1930s. These early demonstrations were installed at "booths" in post offices and shown at various world expositions. It took until 1970 for AT&T to launch the first true video conferencing system, wherein anyone could subscribe to the service and have the technology in their home or office. Videotelephony also included "image phones" which would exchange still images between units every few seconds over conventional plain old telephone service (POTS) lines, essentially the same as slow-scan TV. The development of advanced video codecs, more powerful CPUs, and high-bandwidth Internet telecommunication services in the late 1990s allowed videophones to provide high-quality low-cost color service between users almost anyplace in the world where the Internet is available.

Although not as widely used in everyday communications as audio-only and text communication, useful applications include sign language transmission for deaf and speech-impaired people, distance education, telemedicine, and overcoming mobility issues. It is also used in commercial and corporate settings to facilitate meetings and conferences, typically between parties that already have established relationships. News media organizations have begun to use desktop technologies like Skype to provide higher-quality audio than the cellular phone network, and video links at a much lower cost than sending professional equipment or using a professional studio. More popular videotelephony technologies use the Internet rather than the traditional landline phone network, even accounting for modern digital packetized phone network protocols, and even though videotelephony software commonly runs on smartphones.

Practical digital videotelephony was made possible only with advances in video compression, due to the impractically high bandwidth requirements of uncompressed video. To achieve Video Graphics Array (VGA) quality video (480p resolution and 256 colors) with raw uncompressed video, it would require a bandwidth of over 92 Mbps. The most important compression technique that enabled practical digital videotelephony and video conferencing is the discrete cosine transform (DCT). The DCT, a form of lossy compression, was conceived in 1972 by Nasir Ahmed, who developed the algorithm with T. Natarajan and K. R. Rao at the University of Texas in 1973. The DCT algorithm became the basis for the first practical video coding standard that was useful for online video conferencing, H.261, standardized by the ITU-T in 1988, and subsequent H.26x video coding standards.

In the 1980s, digital telephony transmission networks became possible, such as with ISDN networks, assuring a minimum bit rate (usually 128 kilobits/s) for compressed video and audio transmission. During this time, there was also research into other forms of digital video and audio communication. Many of these technologies, such as the Media space, are not as widely used today as videoconferencing but were still an important area of research. The first dedicated systems started to appear as ISDN networks were expanding throughout the world. One of the first commercial videoconferencing systems sold to companies came from PictureTel Corp., which had an Initial Public Offering in November 1984.

In 1984, Concept Communication in the United States replaced the hundred pound, US$100,000 computers necessary for teleconferencing, with a $12,000 circuit board that doubled the video frame rate from 15 to 30 frames per second, and which reduced the equipment to the size of a circuit board fitting into standard personal computers. The company also secured a patent for a codec for full-motion videoconferencing, first demonstrated at AT&T Bell Labs in 1986.

Videoconferencing systems throughout the 1990s rapidly evolved from very expensive proprietary equipment, software, and network requirements to a standards-based technology readily available to the general public at a reasonable cost.

Finally, in the 1990s, Internet Protocol-based videoconferencing became possible, and more efficient video compression technologies were developed, permitting desktop, or personal computer (PC)-based videoconferencing. In 1992 CU-SeeMe was developed at Cornell by Tim Dorcey et al. In 1995 the first public videoconference between North America and Africa took place, linking a techno fair in San Francisco with a techno-rave and cyberdeli in Cape Town. At the 1998 Winter Olympics opening ceremony in Nagano, Japan, Seiji Ozawa conducted the Ode to Joy from Beethoven's Ninth Symphony simultaneously across five continents in near-real-time.

While videoconferencing technology was initially used primarily within internal corporate communication networks, one of the first community service usages of the technology started in 1992 through a unique partnership with PictureTel and IBM Corporations which at the time were promoting a jointly developed desktop based videoconferencing product known as the PCS/1. Over the next 15 years, Project DIANE (Diversified Information and Assistance Network) grew to utilize a variety of videoconferencing platforms to create a multi-state cooperative public service and distance education network consisting of several hundred schools, libraries, science museums, zoos and parks, and many other community-oriented organizations.

Kyocera conducted a two-year development campaign from 1997 to 1999 that resulted in the release of the VP-210 Visual Phone, the first mobile color videophone that also doubled as a camera phone for still photos. The camera phone was the same size as similar contemporary mobile phones, but sported a large camera lens and a 5 cm (2 inches) color TFT display capable of displaying 65,000 colors, and was able to process two video frames per second.

Videotelephony was popularized in the 2000s, via free Internet services such as Skype and iChat, web plugins supporting H.26x video standards, and on-line telecommunication programs that promoted low cost, albeit lower quality, videoconferencing to virtually every location with an Internet connection.

With the rapid improvements and popularity of the Internet, videotelephony has become widespread through the deployment of video-enabled mobile phones such as 2010's iPhone 4, plus videoconferencing and computer webcams which utilize the Internet telephony. In the upper echelons of government, business, and commerce, telepresence technology, an advanced form of videoconferencing, has helped reduce the need to travel.

Technological developments by videoconferencing developers in the 2010s have extended the capabilities of video conferencing systems beyond the boardroom for use with hand-held mobile devices that combine the use of video, audio, and on-screen drawing capabilities broadcasting in real-time over secure networks, independent of location. Mobile collaboration systems now allow people in previously unreachable locations, such as workers on an offshore oil rig, the ability to view and discuss issues with colleagues thousands of miles away. Traditional videoconferencing system manufacturers have begun providing mobile applications as well, such as those that allow for life and still image streaming.

The highest ever video call (other than those from aircraft and spacecraft) took place on May 19, 2013, when British adventurer Daniel Hughes used a smartphone with a BGAN satellite modem to make a video call to the BBC from the summit of Mount Everest, at 8,848 meters (29,029 ft) above sea level.

The COVID-19 pandemic resulted in a significant increase in the use of videoconferencing. Berstein Research found that Zoom added more subscribers during the first two months of 2020 than in the entire year 2019. GoToMeeting had a 20 percent increase in usage, according to LogMeIn. The UK based StarLeaf reported a 600 percent increase in national call volumes. 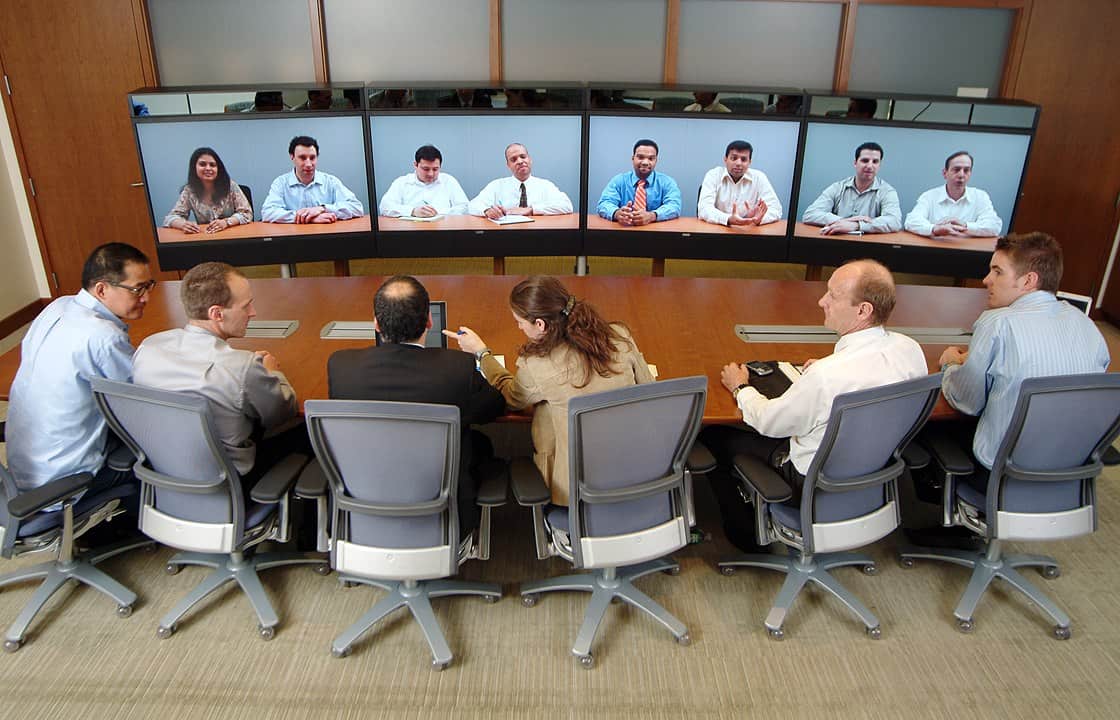