Writing credits impact the career of writers, as well as their reputation and union membership.

Writers trade on the reputation of their name; John Howard Lawson, the first president of the Screen Writers Guild (SWG; now the WGA), said that "a writer's name is his most cherished possession. It is his creative personality, the symbol of the whole body of his ideas and experience." Not having their name on a film's credits will not only lose the writer residuals but can also prevent them from finding future work, dependent on the film's success. A writer may also be given a bonus if their name is in the credits, as films often have many more contributing writers than the credits show.

The credit system can affect eligibility for membership in the union, as one way in which a person becomes a member of the Writers Guild of America, West (WGAW) is by accruing 'points' which are awarded based on the individual's writing credit. Membership points are also accrued through employment by, or sale or option to, a company that is a signatory to the Minimum Basic Agreement (MBA).

All writers on a project have the right to know who else has written on that project. After the MBA has been signed, a production is required to tell all new writers of those preceding them; a writer may ask the production for the names of those who contribute after them. Writers also bear responsibilities to make sure they are informed, and to inform other writers on the same project that they are working for it; they must also file their contract with the appropriate Writers Guild within a week of receiving it. For television productions of a motion picture over 90 minutes, the production company must inform, in writing, all writers of the writers who follow them. The MBA stipulates also that the production company must supply all participant writers – anyone who has contributed, or been hired to contribute, written material; anyone who has been paid for their prior written material whether purchased or licensed; anyone who contributed in any of the aforementioned ways to the original script, in the case of a remake – and the Writers Guild a notice of tentative writing credits, and to give all participant writers a copy of either the shooting script or latest revised script, promptly upon the conclusion of photography. Any participant writer, even deceased, has the right to be involved in the credit determination process (this may be through a representative, such as an agent). Up to three writers, or two teams of writers in film and three teams of writers in television, may receive credit for production. The Writers Guild has the right to protest any company's proposal of credits, regardless of the views of the writers.

To determine credits, "it is vital that the writer keep copies of all work done", and submit copies to the Writers Guild promptly upon completion. Scripts as well as substantial story ideas and other literary material are counted for credit decisions. When there is more than one participant writer on a production, "all participants have the right to agree unanimously among themselves as to which of them shall receive writing credits on the screen and in what form", as long as the agreed form meets requirements. The MBA also establishes that the agreed form "shall not be suggested or directed by the Company".

The Writers Guild also officially presumes that any writer has access to all prior material written for the project during the time they are employed, underscoring credits given to prior writers who have been removed from projects. Materials used for research are not credited, but source material as defined by the WGA receives credits. The appropriate credit to use for the source material is anything indicative of the nature and relationship of the source material and the final script, with the WGA providing the examples "From a Play by, From a Novel by, Based upon a Story by, From a series of articles by, Based upon a by".

Once a writer has received both the notice of tentative credits and the final script, they can either agree with the production's tentative credits, in which case they do nothing; they can discuss the credits with the other writers through the Writers Guild, and they can challenge the tentative credits within a certain time period. If a participant writer disagrees with the credits, but there are other participants and it is seen that an agreement may be reached between them, the Screen/Television Credits Administrator must make a best attempt to arrange a discussion between all writers before arbitration is sought. 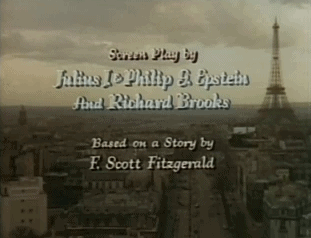