Measurement of wow and flutter is carried out on audio tape machines, cassette recorders and players, and other analog recording and reproduction devices with rotary components (e.g. movie projectors, turntables (vinyl recording), etc.) This measurement quantifies the amount of 'frequency wobble' (caused by speed fluctuations) present in subjectively valid terms. Turntables tend to suffer mainly slow wow. In digital systems, which are locked to crystal oscillators, variations in clock timing are referred to as wander or jitter, depending on speed.

While the terms wow and flutter used to be used separately (for wobbles at a rate below and above 4 Hz respectively), they tend to be combined now that universal standards exist for measurement which takes both into account simultaneously. Listeners find flutter most objectionable when the actual frequency of wobble is 4 Hz, and less audible above and below this rate. This fact forms the basis for the weighting curve shown here. The weighting curve is misleading, in as much as it presumes inaudibility of flutters above 200 Hz when actually faster flutters are quite damaging to the sound. A flutter of 200 Hz at a level of -50db will create 0.3% intermodulation distortion, which would be considered unacceptable in a preamp or amplifier.

Measuring instruments use a frequency discriminator to translate the pitch variations of a recorded tone into a flutter waveform, which is then passed through the weighting filter, before being full-wave rectified to produce a slowly varying signal which drives a meter or recording device. The maximum meter indication should be read as the flutter value.

The following standards all specify the weighting filter shown above, together with a special slow-quasi-peak full-wave rectifier designed to register any brief speed excursions. As with many audio standards, these are identical derivatives of a common specification.

Measurement is usually made on a 3.15 kHz (or sometimes 3 kHz) tone, a frequency chosen because it is high enough to give good resolution but low enough not to be affected by drop-outs and high-frequency losses. Ideally, flutter should be measured using a pre-recorded tone free from flutter. Record-replay flutter will then be around twice as high because worst-case variations will add from time to time. When a recording is played back on the same machine it was made on, a very slow change from low to high flutter will often be observed, because any cyclic flutter caused by capstan rotation may go from adding to canceling as the tape slips slightly out of synchronism. A good technique is to stop the tape from time to time and start it again, as this will often result in different readings as the correlation between record and playback flutter shifts. On high-end or most professional machines in a well-maintained state, one may expect that it is impractical to not possible to find a tape made on a better machine. Therefore, a record-playback test using the stop-start technique, is, for practical purposes, the best that can be accomplished.

Wow and flutter are particularly audible on music with oboe, string, guitar, flute, brass, or piano solo playing. While wow is perceived clearly as pitch variation, flutter can alter the sound of the music differently, making it sound ‘cracked’ or ‘ugly’. A recorded 1 kHz tone with a small amount of flutter (around 0.1%) can sound fine in a ‘dead’ listening room, but in a reverberant room, constant fluctuations will often be clearly heard. These are the result of the current tone ‘beating’ with its echo, which since it originated slightly earlier, has a slightly different pitch. What is heard is quite pronounced amplitude variation, which the ear is very sensitive to. This probably explains why piano notes sound ‘cracked’. Because they start loud and then gradually tail off, piano notes leave an echo that can be as loud as the dying note that it beats with, resulting in a level that varies from complete cancellation to double-amplitude at a rate of a few Hz: instead of a smoothly dying note we hear a heavily modulated one. Oboe notes may be particularly affected because of their harmonic structure. Another way that flutter manifests is as a truncation of reverb tails. This may be due to the persistence of memory with regard to spatial location based on early reflections and comparison of Doppler effects over time. The auditory system may become distracted by pitch shifts in the reverberation of a signal that should be of the fixed and solid pitch.

The term "flutter echo" is used in relation to a particular form of reverberation that flutters in amplitude. It has no direct connection with flutter as described here, though the mechanism of modulation through cancellation may have something in common with that described above.

Absolute speed error causes a change in pitch, and it is useful to know that a semitone in music represents a 6% frequency change. This is because Western music uses the ‘equal temperament scale' based on a constant geometric ratio between twelve notes, and the twelfth root of 2 is 1.05946. Anyone with a good musical ear can detect a pitching change of around 1%, though an error of up to 3% is likely to go unnoticed, except by those few with ‘absolute pitch’. Most ‘movie’ films shown on European television are sped up by 4.166% because they were shot at 24 frames per second but are scanned at 25 frames per second to match the PAL standard of 25 frames/s 50 fields/s. This causes a noticeable increase in pitch on voices, which often brings surprising comment from the actors themselves when they hear their performance on video. It can also frustrate attempts to play along with film music, which is closer to a semitone sharp than its intended pitch. Recently, digital pitch correction has been applied to some films, which corrects the pitch without altering lip-sync, by adding in extra cycles of sound. This has to be regarded as a form of distortion, as there is no way to change the pitch of a sound without also slowing it down that does not change the waveform itself.

Novel DSP processes have been developed that correct wow and flutter by tracking various spuriae on the tape or film which can be re-purposed as timing references. Several recent (2006) DVD releases have utilized a system developed by Plangent Processes that substantially reduces wow and flutter of very high rates to extremely low levels, with a substantial improvement in quality, and without adding distortion or extra cycles of sound. The software Capstan by Celemony analyzes the already digitalized musical material and uses varispeed playback to eliminate wow and flutter.

High-frequency flutter, above 100 Hz, can sometimes result from tape vibrating as it passes over a head (or other non-rotating element in the tape path), as a result of rapidly interacting stretching in the tape and stick-slip at the head. This is termed 'scrape flutter'. It adds a roughness to the sound that is not typical of wow & flutter, and damping devices or heavy rollers are sometimes employed on professional tape machines to reduce or prevent it. Scrape flutter measurement requires special techniques, often using a 10 kHz tone. 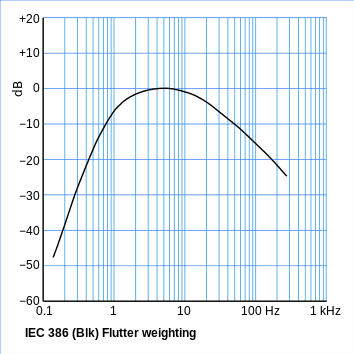 Wow and flutter
see also
resources
source
Adapted from content published on wikipedia.org
credit
Last modified on July 26, 2019, 12:49 am
previous
next
Videocide.com is a service provided by Codecide, a company located in Chicago, IL USA.