A pair of cardioid microphones or elements aimed in crossed directions which feed two channels for stereo pickup.

There exist a number of well-developed microphone techniques used for recording musical, film, or voice sources. Choice of technique depends on a number of factors, including:

There are several classes of microphone placement for recording and amplification.

Often each instrument or vocalist is miked separately, with one or more microphones recording to separate channels (tracks). At a later stage, the channels are combined ('mixed-down') to two channels for stereo or more for surround sound. The artists need not perform in the same place at the same time, and individual tracks (or sections of tracks) can be re-recorded to correct errors. Generally, effects such as reverberation are added to each recorded channel, and different levels sent to left and right final channels to position the artist in the stereo sound-stage. Microphones may also be used to record the overall effect or just the effect of the performance room.

This permits greater control over the final sound, but recording two channels (stereo recording) is simpler and cheaper and can give a sound that is more natural.

There are two features of sound that the human brain uses to place objects in the stereo sound-field between the loudspeakers. These are the relative level (or loudness) difference between the two channels Δ L, and the time delay difference in arrival times for the same sound in each channel Δ t. The "interaural" signals (binaural ILD and ITD) at the ears are not the stereo microphone signals which are coming from the loudspeakers and are called "interchannel" signals (Δ L and Δ t). These signals are normally not mixed. Loudspeaker signals are different from the sound arriving at the ear. See the article "Binaural recording for earphones".

Here there are two directional microphones at the same place and typically placed at 90° or more to each other. A stereo effect is achieved through differences in sound pressure level between two microphones. Due to the lack of differences in time-of-arrival and phase ambiguities, the sonic characteristic of X-Y recordings is generally less "spacey" and has less depth compared to recordings employing an AB setup.
Blumlein Stereo

When the microphones are bidirectional and placed facing +-45° with respect to the sound source, the X-Y-setup is called a Blumlein Pair. The sonic image produced by this configuration is considered by many authorities to create a realistic, almost holographic soundstage.

A further refinement of the Blumlein Pair was developed by EMI in 1958, who called it "Stereosonic". They added a little in-phase crosstalk above 700 Hz to better align the mid and treble phantom sources with the bass ones.

This technique uses two parallel microphones, typically omnidirectional, some distance apart, capturing time-of-arrival stereo information as well as some level (amplitude) difference information, especially if employed close to the sound source(s). At a distance of about 50 cm (0.5 m) the time delay for a signal reaching the first one and then the other microphone from the side is approximately 1.5 ms (1 to 2 ms). If the distance is increased between the microphones it effectively decreases the pickup angle. At 70 cm distance, it is about equivalent to the pickup angle of the near-coincident ORTF setup.
M/S technique: Mid/Side stereophony

This coincident technique employs a bidirectional microphone (with a Figure of 8 polar patterns) facing sideways and a cardioid (generally a variety of cardioid, although Alan Blumlein described the usage of an omnidirectional transducer in his original patent) facing the sound source. The capsules are stacked vertically and brought together as closely as possible, to minimize comb filtering caused by differences in arrival time.

The left and right channels are produced through a simple matrix: Left = Mid + Side, Right = Mid − Side ("minus" means you add the side signal with the polarity reversed). This configuration produces a completely mono-compatible signal and, if the Mid and Side signals are recorded (rather than the matrixed Left and Right), the stereo width (and with that, the perceived distance of the sound source) can be manipulated after the recording has taken place.

The Jecklin Disk technique is similar to A/B recording, with 2 Omni-directional microphones at 36 cm apart from each other. A sound-absorbing Jecklin disk of 35 cm is placed in the middle between the two microphones. The disk makes the apparent separation between the mics much larger than an equivalent A/B recording.

The equipment for the techniques also varies from the bulky to the small and convenient. A-B techniques generally use two separate microphone units, often mounted on a bar to define the separation. X-Y microphone capsules can be mounted in one unit, or even on the top of a handheld digital recorder.

M/S arrays can be very compact and fit easily into a standard blimp windscreen, which makes boom-operated stereo recordings possible. They provide a variable soundstage width to match a zoom lens, which can be manipulated in post-production. This makes M/S a very popular stereo technique for film location recording. They are often used in small 'pencil microphones' to mount on video cameras, sometimes even coupled to the zoom. 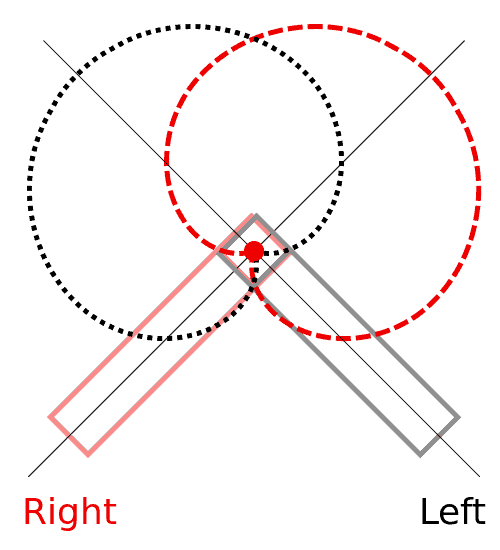 X-Y Pattern
see also
source
Adapted from content published on wikipedia.org
credit
Last modified on July 26, 2019, 1:15 am
previous
next
Videocide.com is a service provided by Codecide, a company located in Chicago, IL USA.