A high-intensity light, with a polished parabolic reflector.

A xenon arc lamp is a highly specialized type of gas discharge lamp, an electric light that produces light by passing electricity through ionized xenon gas at high pressure. It produces a bright white light that closely mimics natural sunlight, with applications in movie projectors in theaters, in searchlights, and for specialized uses in industry and research to simulate sunlight, often for product testing.

Xenon headlamps in automobiles are actually metal-halide lamps, where a xenon arc is only used during start-up to correct the color temperature.

Each consists of a fused quartz or other heat resistant glass arc tube, with a tungsten metal electrode at each end. The glass tube is first evacuated and then re-filled with xenon gas. For xenon flash tubes, a third "trigger" electrode usually surrounds the exterior of the arc tube. The lifetime of a xenon arc lamp varies according to its design and power consumption, with a major manufacturer quoting average lifetimes ranging from 500 hours (7kW) to 1,500 (1kW).

Interest in the xenon discharge was first aroused by P. Schulz in 1944, following his discovery of its near-continuous spectrum and high color rendering white light. Owing to wartime limitations on the availability of this noble gas, significant progress was not made until John Aldington of the British Siemens lamp company published his research in 1949. This triggered intensive efforts at the German Osram company to further develop the technology as a replacement for carbon arcs in cinema projection. The first successful public projection using xenon light was performed on 30 October 1950, when excerpts from a color film (Das Schwarzwaldmädel) were shown during the 216th session of the German Cinematographic Society in Berlin. The technology was commercially introduced by German Osram in 1952. First produced in the 2 kW size (XBO2001), these lamps saw wide use in movie projection, where they replaced the older, more labor-intensive (to operate) carbon arc lamps.

The white continuous light generated by the xenon arc is spectrally similar to daylight, but the lamp has rather low efficacy in terms of lumens of visible light output per watt of input power. Today, almost all movie projectors in theaters employ these lamps, with power ratings ranging from 900 watts up to 12 kW. Omnimax (Imax Dome) projection systems use single xenon lamps with ratings as high as 15 kW. As of 2016, laser illumination for digital theater projectors is starting to establish a market presence and has been predicted to supersede the xenon arc lamp for this application.

All modern xenon short-arc lamps use a fused quartz envelope with thoriated tungsten electrodes. Fused quartz is the only economically feasible material currently available that can withstand the high pressure (25 atmospheres for an IMAX bulb) and high temperature present in an operating lamp, while still being optically clear. The thorium dopant in the electrodes greatly enhances their electron emission characteristics. Because tungsten and quartz have different coefficients of thermal expansion, the tungsten electrodes are welded to strips of pure molybdenum metal or Invar alloy, which are then melted into the quartz to form the envelope seal.

Because of the very high power levels involved, large lamps are water-cooled. In those used in IMAX projectors, the electrode bodies are made from solid Invar and tipped with thoriated tungsten. An O-ring seals the tube so that the naked electrodes do not contact the water. In low power applications, the electrodes are too cold for efficient electron emission and are not cool. In high power applications, an additional water cooling circuit for each electrode is necessary. To reduce cost, the water circuits are often not separated and the water needs to be deionized to make it electrically non-conductive, which lets the quartz or some laser media dissolve into the water.

To achieve maximum efficiency, the xenon gas inside short-arc lamps is maintained at extremely high pressure — up to 30 atmospheres (440 psi / 3040 kPa) — which poses safety concerns. If a lamp is dropped or ruptures while in service, pieces of the lamp envelope can be thrown at high speed. To mitigate this, large xenon short-arc lamps are normally shipped in protective shields, which will contain the envelope fragments should breakage occur. Normally, the shield is removed once the lamp is installed in the lamp housing. When the lamp reaches the end of its useful life, the protective shield is put back on the lamp, and the spent lamp is then removed from the equipment and discarded. As lamps age, the risk of failure increases, so bulbs being replaced are at the greatest risk of explosion. Lamp manufacturers recommend the use of eye protection when handling xenon short-arc lamps. Some lamps, especially those used in IMAX projectors, require the use of full-body protective clothing. 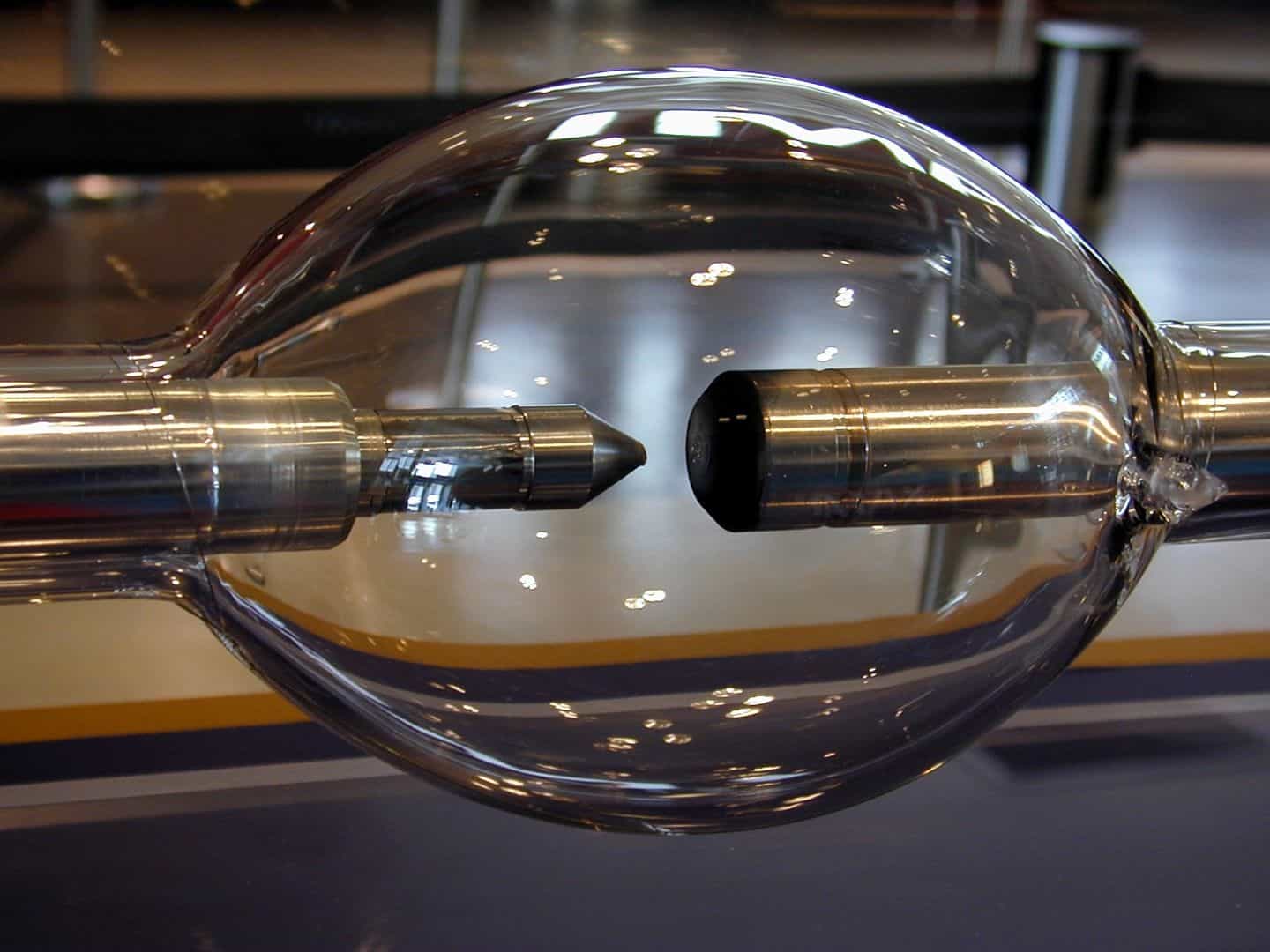 Xenon
see also
resources
source
Adapted from content published on wikipedia.org
credit
Last modified on July 26, 2019, 12:58 am
previous
next
Videocide.com is a service provided by Codecide, a company located in Chicago, IL USA.