The XLR connector is a style of electrical connector found on professional audio, video, and stage lighting equipment.

XLR connectors are circular and have between three and seven pins. We commonly associate them with balanced audio interconnection, lighting control, low-voltage power supplies, and other similar applications.

The XLR connector specifications are governed by IEC 61076-2-103, an international standard for dimensions.

They are superficially similar to the smaller DIN connector range, though they are not physically compatible with them.

A smaller version, the Mini XLR Connector, is used on smaller equipment.

The XLR connector was invented by James H. Cannon, founder of Cannon Electric in Los Angeles, California (now part of ITT Corporation). For this reason, it is sometimes colloquially known as a Cannon plug or Cannon connector. It was originally manufactured as the Cannon X series. By 1950 a latching mechanism was added (Cannon XL), and by 1955 a version surrounding the female contacts with a synthetic rubber polychloroprene (neoprene) insulation using the part number prefix XLR.

The Switchcraft corporation later started manufacturing compatible connectors, followed by Neutrik. Neutrik made a number of improvements to the connector. Its second-generation design, known as the X-series, had four parts for the cable connector and eliminated the small screws used by both Cannon and Switchcraft, which were prone to working loose, falling out and becoming lost.

XLR connectors are available in male and female versions in both cable and chassis mounting designs, so a total of four styles. This is slightly unusual as many other connector designs omit one of the styles (typically a chassis mounting male connector).

The female XLR connectors are designed to first connect pin 1 (the earth pin), before the other pins make contact when a male XLR connector is inserted. With the ground connection established before the signal lines are connected, the insertion (and removal) of XLR connectors in live equipment is possible without picking up external signals (as usually happens with, for example, rca connectors).

The terminology for labeling the corresponding members of a pair of mating connectors follows the usual rules for the gender of connectors: a ‘male’ connector is the one with pins on the smallest element, ‘female’ has corresponding receptacles. A ‘plug’ connector enters the ‘socket’ connector, judged by the largest element. For most XLR, plugs are male and sockets are female. XLR is unusual as, at least in audio applications, all four combinations of male and female, plugs and sockets are equally common. A common misnomer is that ‘plugs’ are free connectors and ‘sockets’ are panel-mounted, but XLR uses many free female sockets and panel-mounted male plugs. There is a loose convention for audio work that signals are generated by equipment with male pins and transmitted to that with female receptacles.

Three-pin XLR connectors are by far the most common style and are an industry standard for balanced audio signals. The great majority of professional microphones use the XLR connector. In previous years, they were used for loudspeaker connections, for instance by Trace Elliot in its bass enclosures. The XLR could accept 14 AWG (1.6 mm) wire with a current-carrying capacity of 15 amps, suitable for most loudspeakers, but they have been superseded by the Speakon connector for professional loudspeakers. The Speakon connector accepts larger wire and carries more current, and it provides a better shield for the contacts, which may carry dangerous voltages when connected to an amplifier.

Three-pin XLR connectors are used to interconnect powered speakers with line-level signals. This use is commonly seen in PA system applications and seems to be growing more common.

Rechargeable devices exist that use three-pin XLR connectors. These can be found on electric-powered mobility wheelchairs and scooters. The connectors carry from 2 to 10 amps at 24 volts.

An obsolete use for three-pin XLR connectors was for MIDI data on some Octave-Plateau synthesizers including the Voyetra-8.

The three-pin XLR connector is commonly used for DMX512, on lighting and related control equipment., particularly at the budget / DJ end of the market. However, using three-pin XLR connectors for DMX512 is specifically prohibited by section 7.1.2 of the DMX512 standard. Use of the three-pin XLR in this context firstly presents a risk of damage to the lighting equipment should an audio cable carrying 48-volt phantom power be accidentally connected, and secondly encourages the use of cable following analog audio specifications for DMX, which can lead to signal degradation and unreliable operation of the DMX network.

Four-pin XLR connectors are used in a variety of applications.

They are the standard connector for intercom headsets, such as systems made by ClearCom and Telex. Two pins are used for the mono headphone signal and two pins for the unbalanced microphone signal.

Another common use is for DC power connections for professional film and video cameras and related equipment. Some desk microphones with LEDs use them. The fourth pin is used to power the LED indicating that the microphone is on. Other uses for the four-pin XLR include some scrollers (color-changing devices for stage lighting), AMX analog lighting control (now obsolete) and some pyrotechnic equipment.

Other common uses are for dual-element or stereo microphones (two balanced audio signals with a common ground) and stereo intercom headset (3 pins for the stereo headphone signal - left, right, and ground, and 2 pins for the unbalanced microphone signal).

An obsolete use for seven-pin XLR connectors was analog lighting control signals, as well as for wired intercom in broadcast studios, specifically with Ward-Beck intercoms.

The loudspeaker Cannon (known as a PDN connector) had blue or white insulation (depending on its gender), was intended for connections between audio power amplifiers and loudspeakers. These are manufactured by Amphenol (formerly by Alcatel Components and ITT Cannon Australia). 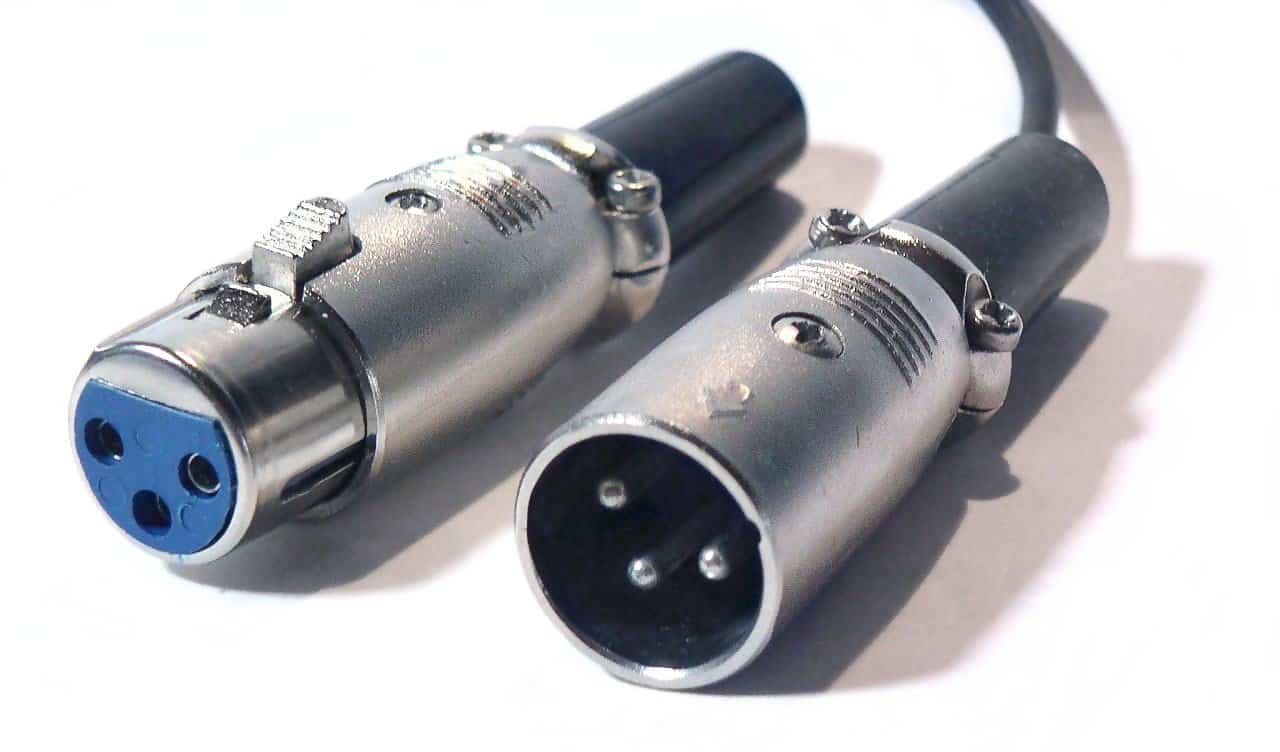