A zoetrope is one of several pre-film animation devices that produce the illusion of motion by displaying a sequence of drawings or photographs showing progressive phases of that motion. It was basically a cylindrical variation of the phénakisticope, suggested almost immediately after the stroboscopic discs were introduced in 1833. The definitive version, with easily replaceable […]

A zoetrope is one of several pre-film animation devices that produce the illusion of motion by displaying a sequence of drawings or photographs showing progressive phases of that motion. It was basically a cylindrical variation of the phénakisticope, suggested almost immediately after the stroboscopic discs were introduced in 1833. The definitive version, with easily replaceable picture strips, was introduced as a toy by Milton Bradley in 1866 and became very successful.

The name zoetrope was composed of the Greek root words ζωή zoe, "life" and τρόπος tropos, "turning" as a translation of "wheel of life". The term was coined by inventor William E. Lincoln.

The zoetrope consists of a cylinder with cuts vertically in the sides. On the inner surface of the cylinder is a band with images from a set of sequenced pictures. As the cylinder spins, the user looks through the cuts at the pictures across. The scanning of the slits keeps the pictures from simply blurring together, and the user sees a rapid succession of images, producing the illusion of motion. From the late 19th century, devices working on similar principles have been developed, named analogously as linear zoetropes and 3D zoetropes, with traditional zoetropes referred to as "cylindrical zoetropes" if a distinction is needed.

The zoetrope works on the same principle as its predecessor, the phenakistoscope, but is more convenient and allows the animation to be viewed by several people at the same time. Instead of being radially arrayed on a disc, the sequence of pictures depicting phases of motion is on a paper strip. For viewing, this is placed against the inner surface of the lower part of an open-topped metal drum, the upper part of which is provided with a vertical viewing slit across from each picture. The drum, on a spindle base, is spun. The faster the drum is spun, the smoother the animation appears.

An earthenware bowl from Iran, over 5000 years old, could be considered a predecessor of the zoetrope. This bowl is decorated in a series of images portraying a goat jumping toward a tree and eating its leaves. Though the images are sequential and seem evenly distributed around the bowl, to have the images appear as an animation the bowl would have to rotate quite fast and steadily while a stroboscopic effect would somehow have to be generated. As such, it remains very uncertain if the artist who created the bowl actually intended to create an animation.

According to a 4th-century Chinese historical text, the 1st-century BC Chinese mechanical engineer and craftsman Ding Huan created a lamp with a circular band with images of birds and animals that moved "quite naturally" when the heat of the lamp caused the band to rotate. However, it is unclear whether this really created the illusion of motion or whether the account was an interpretation of the spatial movement of the pictures of animals. Possibly the same device was referred to as "umbrella lamp" and mentioned as "a variety of zoetrope" which "may well have originated in China" by historian of Chinese technology Joseph Needham. It had pictures painted on thin panes of paper or mica on the sides of a light cylindrical canopy bearing vanes at the top. When placed over a lamp it would give an impression of the movement of animals or men. Needham mentions several other descriptions of figures moving after the lighting of a candle or lamp, but some of these have a semi-fabulous context or can be compared to heat operated carousel toys. It is possible that all these early Chinese examples were actually the same as, or very similar to, the "trotting horse lamp" known in China since before 1000 AD. This is a lantern which on the inside has cut-out silhouettes or painted figures attached to a shaft with a paper vane impeller on top, rotated by heated air rising from a lamp. The moving silhouettes are projected on the thin paper sides of the lantern. Some versions added extra motion with jointed heads, feet, or hands of figures triggered by a transversely connected iron wire. None of these lamps are known to have featured sequential substitution of images depicting motion and thus don't display animation in the way that the zoetrope does.

John Bate described a simple device in his 1634 book "The Mysteries of Nature and Art". It consisted of "a light card, with several images set upon it" fastened on the four spokes of a wheel which was turned around by heat inside a glass or horn cylinder, "so that you would think the images to bee living creatures by their motion". The description seems rather close to a simple four-phase animation device depicted and described in Henry V. Hopwood's 1899 book Living Pictures (see picture). Hopwood gave no name, date, or any additional information for this toy that rotated when blown upon. A similar device inside a small zoetrope drum with four slits was marketed around 1900 by a Parisian company as L'Animateur (or The Animator). However, Bate's device as it is seen in the accompanying illustration seems not to have actually animated the images, but rather to have moved the images around spatially. 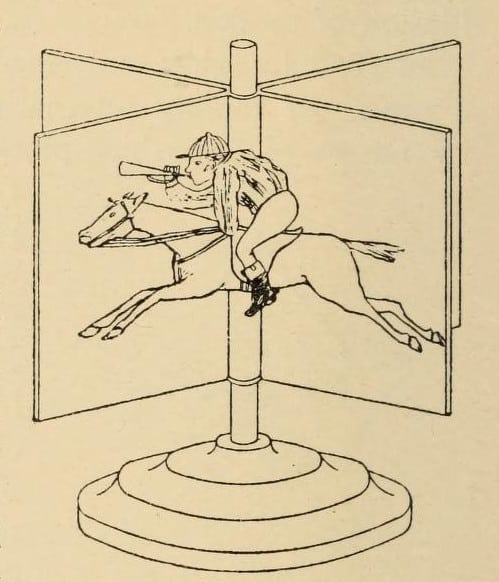 Zoetrope
see also
source
Adapted from content published on wikipedia.org
credit
Last modified on August 12, 2020, 2:06 am
previous
next
Videocide.com is a service provided by Codecide, a company located in Chicago, IL USA.