A mechanical assembly of lens elements for which the focal length (and thus angle of view) can be varied, as opposed to a fixed focal length (FFL) lens.

A zoom lens is a mechanical assembly of lens elements for which the focal length (and thus angle of view) can be varied, as opposed to a fixed focal length (FFL) lens (see prime lens).

A true zoom lens, also called a parfocal lens, is one that maintains focus when its focal length changes. A lens that loses focus during zooming is more properly called a varifocal lens. Despite being marketed as zoom lenses, virtually all consumer lenses with variable focal lengths use varifocal design.

The convenience of variable focal length comes at the cost of complexity - and some compromises on image quality, weight, dimensions, aperture, autofocus performance, and cost. For example, all zoom lenses suffer from at least slight, if not considerable, loss of image resolution at their maximum aperture, especially at the extremes of their focal length range. This effect is evident in the corners of the image, when displayed in a large format or high resolution. The greater the range of focal length a zoom lens offers, the more exaggerated these compromises must become.

Zoom lenses are often described by the ratio of their longest to shortest focal lengths. For example, a zoom lens with focal lengths ranging from 100 mm to 400 mm may be described as a 4:1 or "4×" zoom. The term superzoom or hyperzoom is used to describe photographic zoom lenses with very large focal length factors, typically more than 5× and ranging up to 19× in SLR camera lenses and 83× in amateur digital cameras. This ratio can be as high as 300× in professional television cameras. As of 2009, photographic zoom lenses beyond about 3× cannot generally produce imaging quality on par with prime lenses. Constant fast aperture zooms (usually f/2.8 or f/2.0) are typically restricted to this zoom range. Quality degradation is less perceptible when recording moving images at low resolution, which is why professional video and TV lenses are able to feature high zoom ratios. Digital photography can also accommodate algorithms that compensate for optical flaws, both within in-camera processors and post-production software.

Some photographic zoom lenses are long-focus lenses, with focal lengths longer than a normal lens, some are wide-angle lenses (wider than normal), and others cover a range from wide-angle to long-focus. Lenses in the latter group of zoom lenses, sometimes referred to as "normal" zooms, have displaced the fixed focal length lens as the popular one-lens selection on many contemporary cameras. The markings on these lenses usually say W and T for "Wide" and "Telephoto". Telephoto is designated because the longer focal length supplied by the negative diverging lens is longer than the overall lens assembly (the negative diverging lens acting as the "telephoto group").
Unusual trailed-zoom view of a VLT telescope building

Some digital cameras allow cropping and enlarging of a captured image, in order to emulate the effect of a longer focal length zoom lens (narrower angle of view). This is commonly known as digital zoom and produces an image of lower optical resolution than optical zoom. Exactly the same effect can be obtained by using digital image processing software on a computer to crop the digital image and enlarge the cropped area. Many digital cameras have both, combining them by first using the optical, then the digital zoom.

Zoom and superzoom lenses are commonly used with still, video, motion picture cameras, projectors, some binoculars, microscopes, telescopes, telescopic sights, and other optical instruments. In addition, the afocal part of a zoom lens can be used as a telescope of variable magnification to make an adjustable beam expander. This can be used, for example, to change the size of a laser beam so that the irradiance of the beam can be varied. 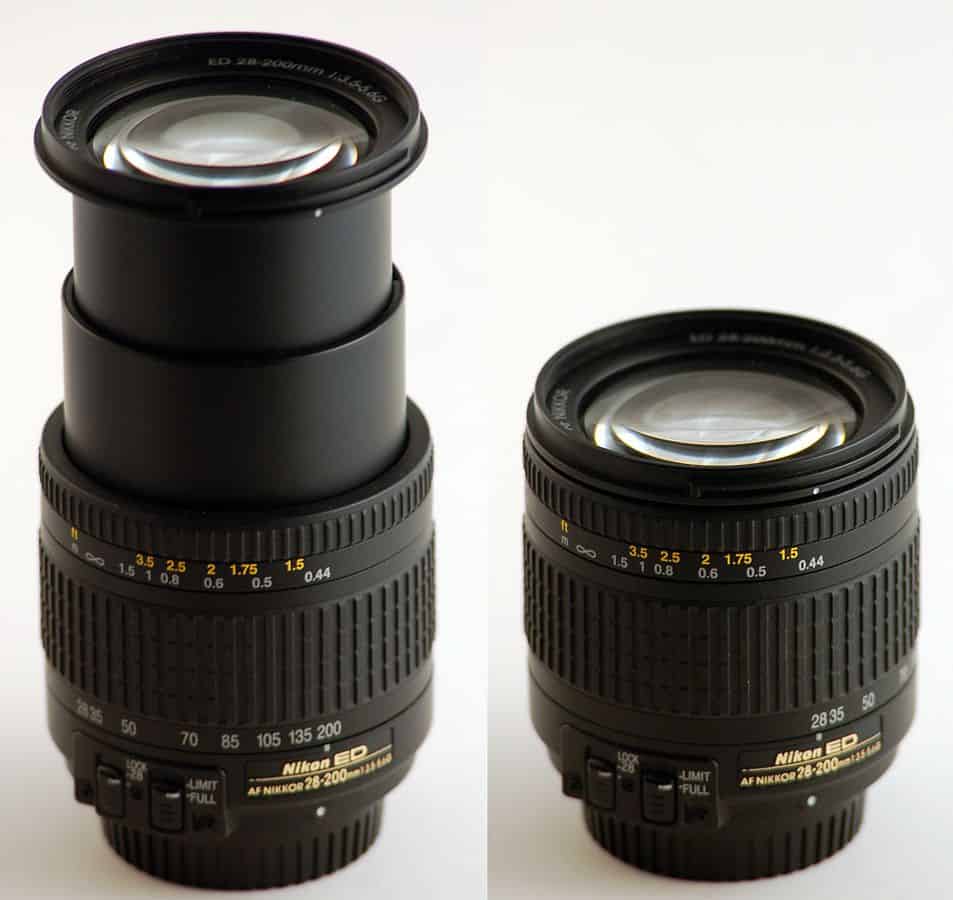