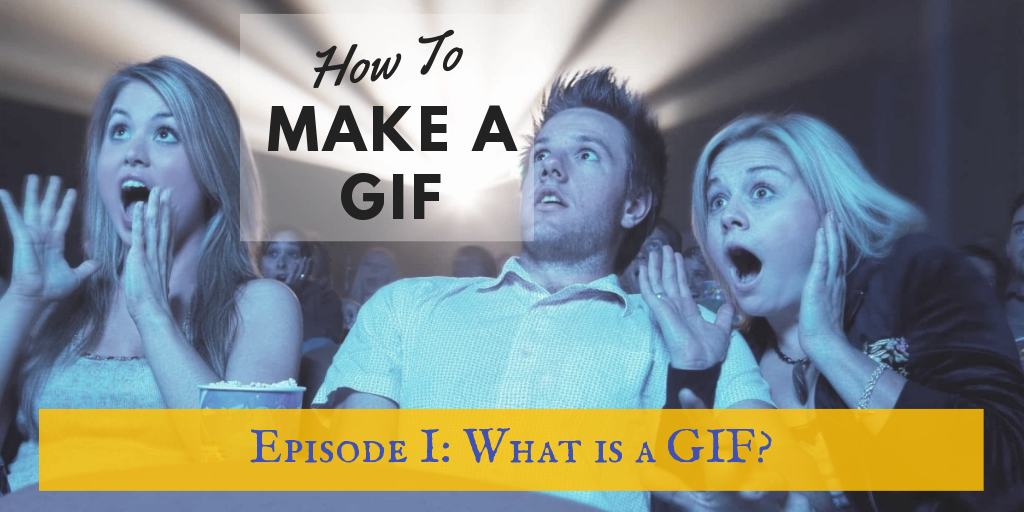 GIF is a file format that can be used to store pictures and sequences of images. Because of the latter, GIFs are generally recognized as the grand parents of web videos as we know them now, in 2019. Having been around for 3 decades. GIFs are to the current web animation and video technology what silent, black and white "reel" movies of the early 20th century are to today's high resolution digital Hollywood movies. Yet GIFs are still around, popping up in your social media timelines, sneaking in your emails and even sneaking up on many web pages, in one form or another. Why? WHY?

In this series, I am going to cover the many ways you can create and distribute GIF files to your audience. I am also going to suggest why you may, or may not still want to use that old technology. Let's get started with the basic but necessary question:

What is a GIF?

The word GIF refers to the name of a file format. It is an acronym for:

GIF is also the designated 3-letters extension of GIF-encoded files.

File extensions are used by storage systems to advertise a file format to the host. As with most common file extensions, almost all operating systems and applications will automatically interpret the provided file extension as a hint and will attempt to process the file as indicated.

How do you say "GIF?" It's a trick question: feel free to pronounce GIF as you please. Say "GIF" with a hard G (as in guitar) or a soft one (as in gym). As far as I know, linguists are still debating the issue. In fact, the geek community is no closer to a firm resolution of the matter of the format's pronunciation than it was 3 decades ago, when the 1980s were roaring to their end.

A Byte of History

The GIF format is somewhat of an anachronism. As is often the case with Historical inconsistencies, the persistent file format only make sense if you understand how it got here. So let's get into a brief history of GIF files.

The GIF format was put together in 1987 by CompuServe -- a private company whose gated network foreshadowed the web as we know it. Yet to this day, most people associate CompuServe with -- you guessed it -- the GIF format! The scheme was originally designed to allow users to quickly share images over slow dial-up connections. While GIFs were originally used as storage for static images (the same way the JPEG and PNG formats are used nowadays,) the authors of the technical specifications soon added the ability for GIFs to show images in an animated sequence. In short, by 1989 you could use a GIF file to display multiple images over a pre-set timeline. This somewhat unique feature remains, to this day, the principal reason why the format is still in use.

Statistically speaking, GIFs are a rare and exceptional occurrence on the web. As a static graphic file format, it is rudimentary and antiquated at best. It has long been superseded by more potent challengers, such as JPEG, WebP and PNG. The latter can deliver critical features that are much better suited for deliver imagery over modern, usually fast connections to the web. Long story short: the 80s are long gone, and so should the GIF file format.

However, because of a mix of Historical and technical factors, as well as due to its longevity on the market, the GIF format is still supported natively by every platform, browser and operating system out there. Hence, the ease of distribution -- the fact that you do not need a special player or plugin to view animated GIFs -- makes up for the format's technical limitations. You can throw an animated GIF over to Twitter, in a web page or splash it on an email, and still sleep soundly knowing that the image will display exactly as intended on the other side of the fence. You can even use GIFs on Facebook -- although in that case, animated GIFs will only as a static images: the social platform does not (officially) allow animations to run. Why is that? Probably because...

For better or worse, the collective psyche associates the GIF format with graphical annoyances. To be honest, who could blame anyone from making this association? After all...

In spite of their bad reputation, GIF images can be used in situations where either 1) nothing else will do, 2) the medium happens to suit the message perfectly,  or 3) the image provides a quick and condensed way of communicating an idea that would otherwise require a thousand words.

As with anything that feels intoxicating at first -- alcohol, Pokemon Go, shopping -- moderation is the key to success. In the vast majority of situations, you've had just enough after one (GIF.) For example, I am certain that there is a plethora of GIF memes to illustrate the idea that I am trying to convey here: that a steady stream can be more impactful than a rush or a flood. Nevertheless, I will refrain from inserting such a GIF. I hope you got the point, so I'll spare you the annoyance.

Like most aging technologies, the GIF format suffers from the limitations that stem from its features. In other words, what was once conceived and regarded as outstanding product features often turns out to be an handicap. That handicap is what is holding it back once the requirements start to shift. In this section, I will look at those features, as well as at their effects on your ability to use GIF images efficiently on the 2019's version of the web.

GIF if a digital file format: blocks of bits stacked according to an architectural plan. In the grand scheme of things, the specifics of the format itself (how the bits are ordered and laid out) matters very little to the user, as it is quite similar to other graphical file formats out there, such as PNG and JPEG. However, the architecture -- the way these digital blocks are laid out to meet the requirements -- differs significantly other popular image formats.

A GIF image is an assembly of frames, or individual pictures. When assembling a GIF, users collate and align images, then place them on a timeline. They then proceed to make adjustments to each image individually: timing, text, frame effects, etc. This linear arrangement is also how the data is stored internally inside a GIF file. Once the GIF is assembled, each frame is displayed in sequence.

Compare the GIF schema to that of a digital video or movie. In the former, each frame is displayed in one after the other. In the latter, frames (called clips and tracks) can and often do overlap, merge and display simultaneously. In essence, an animated GIF is much like a simplified, flip-like movie modeled after the old analog film schema.

Despite their relative internal efficiency, GIFs do not provide any advantage over the most common image file formats: they are bulky and somewhat ugly. Yet GIFs still have aces in the game as they provide the only practical path to displaying animations.

While with a bit/lot of work, the compiled end result can look the same -- it is possible to convert videos to GIF with minimal loss of visible quality -- the ways to get to that are

As with almost all digital formats, the data in GIF files can be encoded and compressed. This means that compressed GIFs will occupy as little space as possible when in storage. That data will automatically expand before it gets rendered on screen. Note that GIF is a lossless format: no data is lost during the compression phase. This property limits the amount of space users can save by compressing the GIF, since lossless digital compression can only save so much space through the elimination of redundancies; on the other hand, the fact that it is lossless means that the resulting animation will will retain its quality no matter how many times it changes hands. Contrast this with the JPEG format, for example, where an image will progressively lose information (thus its original quality) every time it is re-processed and shared. Degradation is not an issue with GIFs.

Hurrah for the lack of quality degradation! Ah, but there’s a catch: when it comes to image quality, the bar was set rather low to begin with -- at least by modern standards. While there’s no limit on the resolution of a GIF (width and height in pixels,) individual frames are limited to 256 colors. This means that an image can only use one of 255 visible colors (and one transparent). Compare this number to the colors that your monitor can handle (over 16,000,000.) The GIF format was created back when the typical number of colors that common computer monitors could display was 16. Times have changed indeed, and as it stands your phone is 62,745 times more accurate at representing photographic information than a native GIF can be.

In a GIF, colors are controlled by “palettes.” Each frame in a GIF is assigned a 256 color palette. By combining layers and transparency, it is possible to display images with a much higher color count; however, that requires layering as many images as the original color range requires, thus making the final file a lot bigger than it should.

The lack of color depth is what makes GIFs appear blocky. In practice, GIFs are not well suited for complex imagery and photos, as they tend to obscure details and make everything edgy. If you’re going to use GIFs to convey ideas, it is best to stick with simple graphics such as cartoons, drawing and simple photos with few nuances. It’s no surprise that in the real world, the most common use of GIF is memes and context-free quotes: statements that are as borderline simplistic and devoid of nuances as the media that distributes them.

Videocide.com is a service provided by Codecide, a company located in Chicago, IL USA.