Jaoui was born in Antony, Hauts-de-Seine, and is of Tunisian Jewish descent. She is the daughter of Hubert Jaoui and Gyza Jaoui, who are both writers. They moved to Paris when she was 8 years old. She started theatre when she was in high school at the Lycée Henri-IV in Paris. She entered the Cours Florent when she was 15. Patrice Chéreau, director of the Théâtre des Amandiers in Nanterre where she began attending drama classes in 1984, gave her a role in the film Hôtel de France in 1987. That same year, she also played in Harold Pinter's L'anniversaire beside Jean-Pierre Bacri, who would later become a faithful colleague and companion.

Together Jaoui and Bacri wrote the play Cuisine et dépendances, which was adapted onscreen in 1992 by Philippe Muyl. In 1993, director Alain Resnais asked them to write an adaptation of Alan Ayckbourn's 8-part play Intimate Exchanges, which became the 2-part film Smoking/No Smoking. Thanks to this ironic diptych about free will and destiny, they won the César Award for Best Writing in 1994. But it is in 1996 that they came to know greater success with Cédric Klapisch's adaptation of their play Family Resemblances (Un air de famille) which showed their ability to observe and depict everyday life, and to criticize the social norms through a bitter and corrosive humor. Once again, they won the César Award for Best Writing in 1997 and this very same year they collaborated again with Alain Resnais for Same Old Song (On connaît la chanson) which they wrote but also interpreted: together, they won their third César Award for Best Writing, and Jaoui won her first César Award for Best Supporting Actress.

Jaoui directed her first feature film, The Taste of Others (Le Goût des autres, 2000, written with Jean-Pierre Bacri), which questions social-cultural identities. The film was a huge success in France and attracted 4 million spectators. It also won 4 César Awards in 2001 including Best Film and Best Writing, and also got nominated for the Academy Award for Best Foreign Language Film. In 2004, her second film as a director, Look at Me (Comme une image), co-written with Bacri, was selected for the Cannes Festival, and won the prize for Best Screenplay. She starred in the last Richard Dembo's film, La maison de Nina (2005) and then focused on music and released her album of Latin songs Canta (2006). She returned to the cinema industry two years later in 2008 with Let's Talk About the Rain (Parlez-moi de la pluie) and offered French humorist Jamel Debbouze a different role from what he was used to.

In 2012, Jaoui directed her latest film to date, Under the Rainbow (Au bout du conte), also co-written with Bacri. She revisits several fairy tales such as Cinderella, Snow White, and Little Red Riding Hood. It received acclaim —for originality and humor in the writing and dialogue— from critics and audiences.
Music

Jaoui studied music in the conservatoire when she was 17, but did not start her career as a singer until 2006 when her first album Canta was released. It mixed several Latin music genres (such as flamenco, bolero, and bossa) and she sang exclusively in Spanish and Portuguese. In 2007, it won the Victoire de la Musique award for "best traditional music album".

Jaoui's second album, Dans Mon Pays, was released in 2009. It also featured Latin sonorities and songs sang in Spanish and Portuguese, except for two songs in French.
Personal life
Jaoui and Jean-Pierre Bacri in 2013 at the première showing of Au bout du conte.

Jaoui is the daughter of Gyza Jaoui; a pioneering figure of transactional analysis, a form of psychotherapy initiated by Eric Berne. Jaoui has a brother, Laurent Jaoui , who is also a screenwriter and a director.

Jaoui was in a relationship with Jean-Pierre Bacri from 1987 to 2012. Despite their breakup, the two decided to stay on good terms and to continue to work together.

She adopted two children from Brazil in 2012. 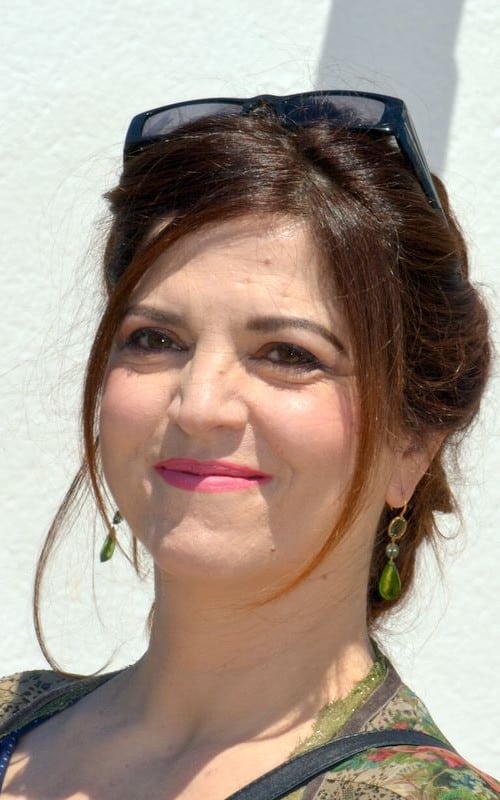