Alexander Parkes (1813-1890) is a renowned British metallurgist and inventor. He's the one who created the first man-made plastic material: Parkesine.

The son of a manufacturer of brass locks, Parkes was apprenticed to Messenger and Sons, brass founders of Birmingham, before going to work for George and Henry Elkington, who patented the electroplating process. Parkes was put in charge of the casting department, and his attention soon began to focus on electroplating. Parkes took out his first patent (No. 8905) in 1841 on a process for electroplating delicate works of art. His improved method for electroplating fine and fragile objects, such as flowers, was granted a patent in 1843. The process involved electroplating an object previously dipped in a solution of phosphorus contained in bisulphide of carbon, and then in nitrate of silver. A spider's web, silver-plated according to this method, was presented to Prince Albert when he visited the Elkington works in 1844.

In total Parkes held at least 66 patents on processes and products, mostly related to electroplating and to the development of plastics.

Alexander Parkes was born at Suffolk Street, Birmingham, the fourth son of James Mears Parkes and his wife Kerenhappuch Childs. Samuel Harrison, described by Sir Josiah Mason as the inventor of the split-ring (or key-ring) and widely credited with the invention of the steel pen, was his great-uncle. Parkes was twice married. By his first marriage, to Jane Henshall Moore (1817–50), he had four sons and two daughters (the cricketer Howard Parkes was a grandson), and by his second marriage, to Mary Ann Roderick (1835–1919), four sons and seven daughters. The elder surviving son of his second marriage, Alexander Parkes junior, sometime President of the Association of Certified and Corporate Accountants, presented many original specimens of Parkesine to the Science Museum in 1937, the core of the museum's Parkesine collection.

Parkes' younger brother Henry (1824–1909), a trained chemist, who was married to Fanny Roderick (1837–97), a sister of Alexander's second wife, assisted him in many of his experiments during a collaboration lasting more than fifty years.

It is believed that the Parkes family descends from the Rev. Michael Parkes, Vicar of Penkridge, Staffordshire (died 1617), and had close connections with the metal-working towns of Wednesbury and Wolverhampton in the 16th, 17th and 18th centuries.

Parkes is remembered in several locations: 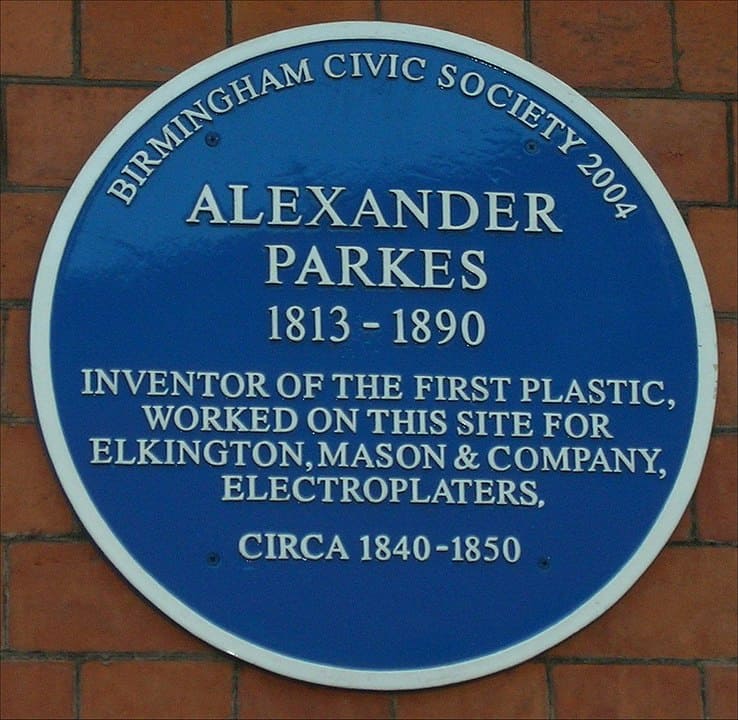