Alfred Eisenstaedt (1898-1995) was a German-born American photographer during World War II. He began his career in Germany prior to World War II, Later in his career, he worked for Life magazine. Life featured more than 90 of his pictures on its covers and published more than 2,500 of his photo stories.

Among his most famous cover photographs was V-J Day in Times Square, taken during the V-J Day celebration in New York City, showing an American sailor kissing a nurse in a "dancelike dip" which "summed up the euphoria many Americans felt as the war came to a close", in the words of his obituary. He was "renowned for his ability to capture memorable images of important people in the news" and for his candid photographs taken with a small 35mm Leica camera, typically with natural lighting.

Eisenstaedt was born in Dirschau (Tczew) in West Prussia, Imperial Germany in 1898. His family was Jewish and moved to Berlin in 1906. Eisenstaedt was fascinated by photography from his youth and began taking pictures at age 11 when he was given his first camera, an Eastman Kodak Folding Camera with roll film. He later served in the German Army's artillery during World War I and was wounded in 1918. While working as a belt and button salesman in the 1920s in Weimar Germany, Eisenstaedt began taking photographs as a freelancer for the Pacific and Atlantic Photos' Berlin office in 1928. The office was taken over by the Associated Press in 1931.

Eisenstaedt became a full-time photographer in 1929 when he was hired by the Associated Press office in Germany, and within a year he was described as a "photographer extraordinaire." He also worked for Illustrierte Zeitung, published by Ullstein Verlag, then the world's largest publishing house. Four years later he photographed the famous first meeting between Adolf Hitler and Benito Mussolini in Italy. Other notable early pictures by Eisenstaedt include his depiction of a waiter at the ice rink of the Grand Hotel in St. Moritz in 1932 and Joseph Goebbels at the League of Nations in Geneva in 1933. Although initially friendly, Goebbels scowled at Eisenstaedt when he took the photograph, after learning that Eisenstaedt was Jewish.

In 1935, Fascist Italy's impending invasion of Ethiopia led to a burst of international interest in Ethiopia. While working for Berliner Illustrierte Zeitung, Alfred took over 3,500 photographs in Ethiopia, before emigrating to the United States, where he joined Life magazine, but returned in the following year to Ethiopia to continue his photography.

Eisenstaedt's family was Jewish. Oppression in Hitler's Nazi Germany caused them to emigrate to the U.S. They arrived in 1935 and settled in New York, where he subsequently became a naturalized citizen, and joined fellow Associated Press émigrés Leon Daniel and Celia Kutschuk in their PIX Publishing photo agency founded that year. The following year, 1936, Time founder Henry Luce bought Life magazine, and Eisenstaedt, already noted for his photography in Europe, was asked to join the new magazine as one of its original staff of four photographers, including Margaret Bourke-White and Robert Capa. He remained a staff photographer from 1936 to 1972, achieving notability for his photojournalism of news events and celebrities.

Along with entertainers and celebrities, he photographed politicians, philosophers, artists, industrialists, and authors during his career with Life. By 1972 he had photographed nearly 2,500 stories and had more than 90 of his photos on the cover. With Life's circulation of two million readers, Eisenstaedt's reputation increased substantially. According to one historian, "his photographs have a power and a symbolic resonance that made him one of the best Life photographers." In subsequent years, he also worked for Harper's Bazaar, Vogue, Town & Country and others.

From his early years as a professional photographer, he became an enthusiast for small 35 mm film cameras, especially the Leica camera. Unlike most news photographers at the time who relied on much larger and less portable 4"×5" press cameras with flash attachments, Eisenstaedt preferred the smaller hand-held Leica, which gave him greater speed and more flexibility when shooting news events or capturing candids of people in action. His photos were also notable as a result of his typical use of natural light as opposed to relying on flash lighting. In 1944, Life described him as the "dean of today's miniature-camera experts."

At the time, this style of photojournalism, with a smaller camera with its ability to use available light, was then in its infancy. It also helped Eisenstaedt create a more relaxed atmosphere when shooting famous people where he was able to capture more natural poses and expressions: "They don't take me too seriously with my little camera," he stated. "I don't come as a photographer. I come as a friend." It was a style he learned from his 35 years in Europe, where he preferred shooting informal, unposed portraits, along with extended picture stories. As a result, Life began using more such photo stories, with the magazine becoming a recognized source of such photojournalism of the world's luminaries. Of Life's photographers, Eisenstaedt was most noted for his "human interest" photos and less the hard news images used by most news publications.

His success at establishing a relaxed setting for his subjects was not without difficulties, however, when he needed to capture the feeling he wanted. Anthony Eden, resistant to being photographed, called Eisenstaedt "the gentle executioner." Similarly, Winston Churchill told him where to place the camera to get a good picture, and during a photoshoot of Ernest Hemingway in his boat, Hemingway, in a rage, tore his own shirt to shreds and threatened to throw Eisenstaedt overboard.

Eisenstaedt, known as "Eisie" to his close friends, enjoyed his annual August vacations on the island of Martha's Vineyard for 50 years. During these summers, he would conduct photographic experiments, working with different lenses, filters, and prisms in natural light. Eisenstaedt was fond of Martha's Vineyard's photogenic lighthouses and was the focus of lighthouse fundraisers organized by Vineyard Environmental Research Institute (VERI).

Two years before his death, Eisenstaedt photographed President Bill Clinton with wife Hillary and daughter Chelsea. The session took place at the Granary Gallery in West Tisbury on Martha's Vineyard and was documented by a photograph published in People magazine on September 13, 1993.

After first settling in New York City in 1935, Eisenstaedt lived in Jackson Heights, Queens, New York, for the rest of his life. Until shortly before his death, he would walk daily from his home to his Life office on the Avenue of the Americas and 51st Street.

He died in his bed at midnight at his beloved Menemsha Inn cottage known as the "Pilot House" at age 96 in the company of his sister-in-law, Lucille Kaye (LuLu), and friend, William E. Marks. 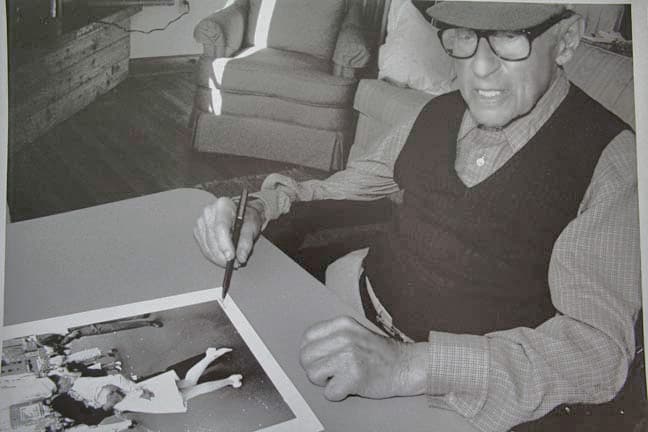 Alfred Eisenstaedt
see also
resources
source
Adapted from content published on wikipedia.org
credit
Last modified on May 8, 2021, 7:28 am
previous
next
Videocide.com is a service provided by Codecide, a company located in Chicago, IL USA.