André Bazin (1918 - 1958) was a renowned and influential French film critic and film theorist.

Bazin started to write about film in 1943 and was a co-founder of the renowned film magazine Cahiers du cinéma in 1951, with Jacques Doniol-Valcroze and Joseph-Marie Lo Duca.

He is notable for arguing that realism is the most important function of cinema. His call for objective reality, |deep focus|, and lack of montage is linked to his belief that the interpretation of a film or scene should be left to the spectator. This placed him in opposition to film theory of the 1920s and 1930s, which emphasized how the cinema could manipulate reality.

Bazin was born in Angers, France in 1918. He met future film and television producer Janine Kirsch while working at Labour and Culture, a militant organization associated with the French Communist Party during World War II and eventually they married in 1949 and had a son named Florent. He died in 1958, age 40, of leukemia.

Bazin started to write about film in 1943 and was a co-founder of the renowned film magazine Cahiers du cinéma in 1951, along with Jacques Doniol-Valcroze and Joseph-Marie Lo Duca. Bazin was a major force in post-World War II film studies and criticism. He edited Cahiers until his death, and a four-volume collection of his writings was published posthumously, covering the years 1958 to 1962 and titled Qu'est-ce que le cinéma? (What is cinema?). A selection from this collection was translated into English and published in two volumes in the late 1960s and early 1970s. They became mainstays of film courses in the English-speaking world but never were updated or revised. In 2009, the Canadian publisher Caboose, taking advantage of more favorable Canadian copyright laws, compiled fresh translations of some of the key essays from the collection in a single-volume edition. With annotations by translator Timothy Barnard, this became the only corrected and annotated edition of these writings in any language. In 2018, this volume was replaced by a more extensive collection of Bazin's texts translated by Barnard, André Bazin: Selected Writings 1943-1958.

The long-held view of Bazin's critical system is that he argued for films that depicted "objective reality" (such as documentaries and films of the Italian neorealism school or as he called it "the Italian school of the Liberation"). He advocated the use of deep focus (Orson Welles), wide shots (Jean Renoir), and the "shot-in-depth", and preferred what he referred to as "true continuity" through mise-en-scène over experiments in editing and visual effects. This placed him in opposition to film theory of the 1920s and 1930s, which emphasized how the cinema could manipulate reality. The concentration on objective reality, deep focus, and lack of montage are linked to Bazin's belief that the interpretation of a film or scene should be left to the spectator. His personal friendships with many directors he wrote about advanced his analysis of their work.

Bazin, who was influenced by personalism, believed that a film should represent a director's personal vision. This idea had a pivotal importance in the development of the auteur theory, the manifesto for which François Truffaut's article "A Certain Tendency of the French Cinema" was published by his mentor Bazin in Cahiers in 1954. Bazin also championed directors like Howard Hawks, William Wyler, and John Ford. 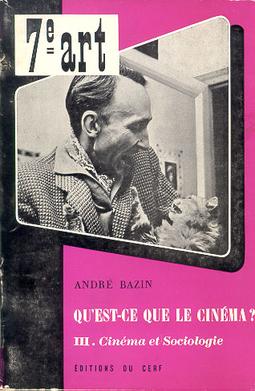