Andre DeToth (1913 - 2002), born Endre Antal Miksa DeToth, was a Hungarian-American film director who produced the 3D film House of Wax despite not being able to see in 3 dimensions. Upon naturalization as a United States citizen in 1945, he took Endre DeToth as his legal name.

Born in 1913 as Sasvári farkasfalvi tóthfalusi Tóth Endre Antal Mihály, DeToth earned a degree in law from the Royal Hungarian Pázmány Péter Science's University in Budapest in the early 1930s. He garnered acclaim for plays written as a college student, acquiring the mentorship of Ferenc Molnár and becoming part of the theater scene in Budapest.

DeToth segued from there to the film industry and worked as a writer, assistant director, editor, and sometimes actor. In 1939 he directed five films just before World War II began in Europe. Several of these films received a significant release in the Hungarian communities in the United States. He went to England, spent several years as an assistant to fellow Hungarian émigré Alexander Korda, and eventually moved to Los Angeles in 1942.

Based on his Hungarian films, the production work for Korda, and the writing he had done on American projects during earlier stints in Los Angeles, he received an oral contract as a director at Columbia Pictures from which he ultimately extricated himself by litigation. He preferred working as an independent and had no "A" budgets early in his career. Thus, he had to supplement his directing income with writing assignments, often uncredited. Introduced to Westerns by John Ford, he worked mostly in that genre throughout the 1950s, often bringing elements of noir style into those films.

In 1951, he received an Oscar nomination for Best Writing (with co-writer William Bowers) for the story filmed as The Gunfighter.

While largely remembered as the director of the earliest and most successful 3D film, House of Wax, DeToth also directed the noir films Pitfall (1948) and Crime Wave (1954).

DeToth lost sight in one eye and wore a black eyepatch; as a 1994 report in The Independent noted, this almost cost him his life:

The piratical black patch De Toth sports over his left eye almost cost him his life. Scouting for locations in Egypt shortly after the Yom Kippur war of 1973, De Toth was kidnapped, pistol-whipped and interrogated by a group of vengeful young men who had mistaken him for Moyshe Dayan. He only escaped with his life after a quick examination of his groin bore out De Toth's claim that far from being an Israeli commander, he was not even Jewish.

During his seven marriages, DeToth became the father and stepfather of 19 children, including editor Nicolas DeToth. He was married to Veronica Lake from 1944 until their divorce in 1952. They had a son, Andre Anthony Michael DeToth III (born October 25, 1945), and a daughter, Diana DeToth (born 1948). In 1953 he married the actress Mary Lou Holloway (née Stratton). At the time of his death in 2002, DeToth was married to his seventh wife, Ann Green.

On October 27, 2002, DeToth died from an aneurysm, aged 89. He was interred in Forest Lawn Memorial Park cemetery in the Hollywood Hills. 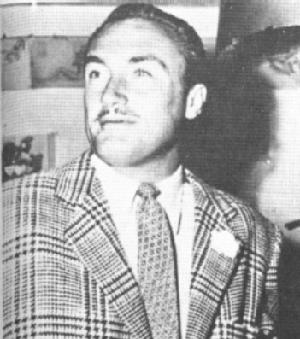