German photographer and professor at the Kunstakademie Düsseldorf, Germany.

Andreas Gursky (born 1955) is a German photographer and professor at the Kunstakademie Düsseldorf, Germany. He is known for his large-format architecture and landscape color photographs, often using a high point of view in most of his photos. His works reach some of the highest prices in the art market among living photographers. His photograph Rhein II was sold for $4,338,500 on 8 November 2011.

Gursky shares a studio with Laurenz Berges, Thomas Ruff, and Axel Hütte on the Hansaallee, in Düsseldorf. The building, a former electricity station, was transformed into an artist's studio and living quarters, in 2001, by architects Herzog & de Meuron, of Tate Modern fame. In 2010–11, the architects worked again on the building, designing a gallery in the basement.

Gursky was born in Leipzig, East Germany in 1955. His family relocated to West Germany, moving to Essen and then Düsseldorf by the end of 1957. From 1978 to 1981, he attended the Universität Gesamthochschule Essen, where he studied visual communication, led by photographers Otto Steinert and Michael Schmidt. Gursky is said to have attended the university to hear Otto Steinert, however, Steinert died in 1978 and Gursky only got to attend a few of his lectures.

Between 1981 and 1987 at the Düsseldorf Art Academy, Gursky received critical training and influence from his teachers Hilla and Bernd Becher, a photographic team known for their distinctive, dispassionate method of systematically cataloging industrial machinery and architecture. Gursky demonstrates a similarly methodical approach in his own larger-scale photography. Other notable influences are the British landscape photographer John Davies, whose highly detailed high vantage point images had a strong effect on the street level photographs Gursky was then making, and to a lesser degree the American photographer Joel Sternfeld.

Before the 1990s, Gursky did not digitally manipulate his images. In the years since, Gursky has been frank about his reliance on computers to edit and enhance his pictures, creating an art of spaces larger than the subjects photographed. Writing in The New Yorker magazine, the critic Peter Schjeldahl called these pictures "vast," "splashy," "entertaining," and "literally unbelievable." In the same publication, critic Calvin Tomkins described Gursky as one of the "two masters" of the "Düsseldorf" school. In 2001, Tomkins described the experience of confronting one of Gursky's large works:

The first time I saw photographs by Andreas Gursky...I had the disorienting sensation that something was happening—happening to me, I suppose, although it felt more generalized than that. Gursky's huge, panoramic color prints—some of them up to six feet high by ten feet long—had the presence, the formal power, and in several cases the majestic aura of nineteenth-century landscape paintings, without losing any of their meticulously detailed immediacies as photographs. Their subject matter was the contemporary world, seen dispassionately and from a distance.

The perspective in many of Gursky's photographs is drawn from an elevated vantage point. This position enables the viewer to encounter scenes, encompassing both center and periphery, which are ordinarily beyond reach. This sweeping perspective has been linked to an engagement with globalization. Visually, Gursky is drawn to large, anonymous, man-made spaces—high-rise facades at night, office lobbies, stock exchanges, the interiors of big-box retailers (See his print 99 Cent II Diptychon). In a 2001 retrospective, New York's Museum of Modern Art described the artist's work, "a sophisticated art of unembellished observation. It is thanks to the artfulness of Gursky's fictions that we recognize his world as our own." Gursky's style is enigmatic and deadpan. There is little to no explanation or manipulation on the works. His photography is straightforward.

Gursky's Dance Valley festival photograph, taken near Amsterdam in 1995, depicts attendees facing a DJ stand in a large arena, beneath strobe lighting effects. The pouring smoke resembles a human hand, holding the crowd in stasis. After completing the print, Gursky explained the only music he now listens to is the anonymous, beat-heavy style known as Trance, as its symmetry and simplicity echoes his own work—while playing towards a deeper, more visceral emotion.

The photograph 99 Cent (1999) was taken at a 99 Cents Only store on Sunset Boulevard in Los Angeles and depicts its interior as a stretched horizontal composition of parallel shelves, intersected by vertical white columns, in which the abundance of "neatly labeled packets are transformed into fields of color, generated by endless arrays of identical products, reflecting off the shiny ceiling" (Wyatt Mason). Rhein II (1999), depicts a stretch of the river Rhine outside Düsseldorf, immediately legible as a view of a straight stretch of water, but also as an abstract configuration of horizontal bands of color of varying widths. In his six-part series Ocean I-VI (2009–2010), Gursky used high-definition satellite photographs which he augmented from various picture sources on the Internet.
Art market

Most of Gursky's photographs come in editions of six with two artist's proofs. 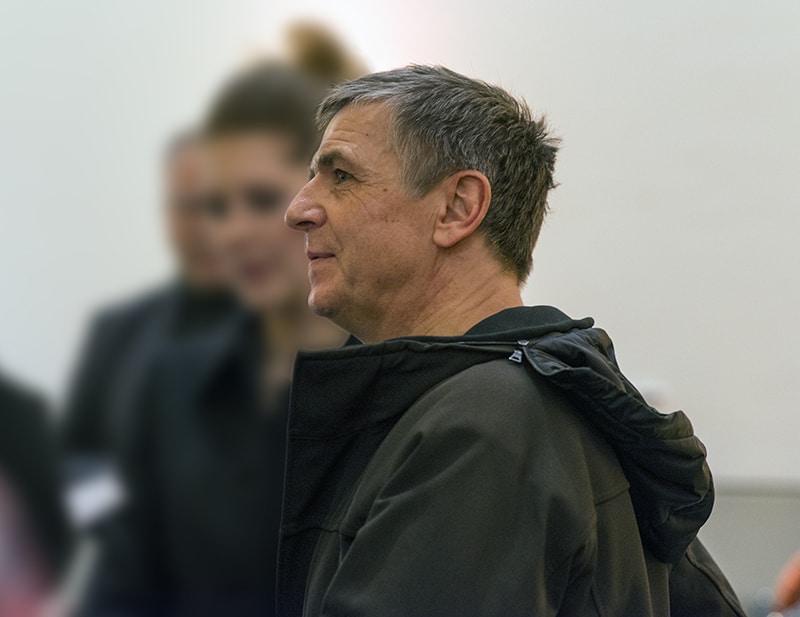