The Lumière brothers, Auguste Marie Louis Nicolas (1862-1954) and Louis Jean (1864-1948) are best known for their Cinématographe motion picture system and the short films they produced between 1895 and 1905. They were manufacturers of photography equipment.

Their screening on 22 March 1895 for circa 200 members of the "Society for the Development of the National Industry" in Paris was probably the first presentation of films on a screen for a large audience. Their first commercial public screening on 28 December 1895 for circa 40 paying visitors and invited relations has traditionally been regarded as the birth of cinema.

The Lumière brothers were born in Besançon, France, to Charles-Antoine Lumière (1840–1911) and Jeanne Joséphine Costille Lumière, who were married in 1861 and moved to Besançon, setting up a small photographic portrait studio where Auguste and Louis were born. They moved to Lyon in 1870, where son Edouard and three daughters were born. Auguste and Louis both attended La Martiniere, the largest technical school in Lyon. Their father Charles-Antoine set up a small factory producing photographic plates, but even with Louis and a young sister working from 5 a.m. to 11 p.m. it teetered on the verge of bankruptcy, and by 1882 it looked as if they would fail. When Auguste returned from military service, the boys designed the machines necessary to automate their father's plate production and devised a very successful new photo plate, etiquettes blue, and by 1884 the factory employed a dozen workers.

They patented several significant processes leading up to their film camera, most notably film perforations (originally implemented by Emile Reynaud) as a means of advancing the film through the camera and projector. The original cinématographe had been patented by Léon Guillaume Bouly on 12 February 1892. The cinématographe — a three-in-one device that could record, develop, and project motion pictures — was further developed by the Lumières. The brothers patented their own version on 13 February 1895.

The date of the recording of their first film is in dispute. In an interview with Georges Sadoul given in 1948, Louis Lumière claimed that he shot the film in August 1894 - before the arrival of the kinetoscope in France. This is questioned by historians, who consider that a functional Lumière camera did not exist before the beginning of 1895.

Louis died on 6 June 1948 and Auguste on 10 April 1954. They are buried in a family tomb in the New Guillotière Cemetery in Lyon. 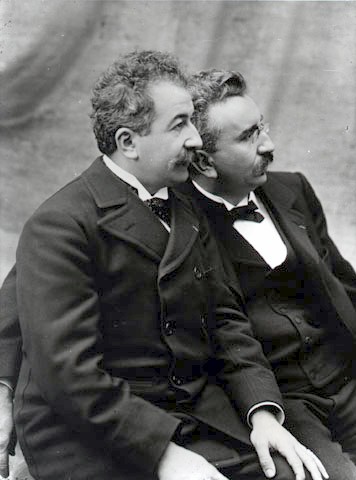 Auguste and Louis Lumière
also known as
resources
source
Adapted from content published on wikipedia.org
credit
Last modified on June 25, 2021, 2:36 am
previous
next
Videocide.com is a service provided by Codecide, a company located in Chicago, IL USA.