Paolo Taviani (born 1931) and Vittorio Taviani (1929-2018), collectively referred to as the Taviani brothers, were Italian film directors and screenwriters who collaborated on film productions.

At the Cannes Film Festival, the Taviani brothers won the Palme d'Or and the FIPRESCI prize for Padre Padrone in 1977 and Grand Prix du Jury for La notte di San Lorenzo (The Night of the Shooting Stars, 1982). In 2012 they won the Golden Bear at the Berlin International Film Festival with Caesar Must Die.

Both born in San Miniato, Tuscany, Italy, the Taviani brothers began their careers as journalists. In 1960 they came to the world of cinema, directing with Joris Ivens the documentary L'Italia non è un paese povero (Italy is not a poor country). They went on to direct two films with Valentino Orsini, Un uomo da bruciare (A Man to Burn) (1962) and I fuorilegge del matrimonio (Outlaws of Marriage) (1963).

Their first autonomous film was I sovversivi (The Subversives, 1967), with which they anticipated the events of 1968. With actor Gian Maria Volonté they gained attention with Sotto il segno dello scorpione (Under the Sign of Scorpio, (1969) where one can see the echoes of Brecht, Pasolini and Godard.

In 1971, they co-signed the media campaign against Milan's police commissioner Luigi Calabresi, published in the magazine L'espresso.

The revolutionary theme is present both in San Michele aveva un gallo (1971), an adaptation of Tolstoy's novel The Divine and the Human, a film greatly appreciated by critics, and in the film Allonsanfan (1974), in which Marcello Mastroianni has a role as an ex-revolutionary who has served a long term in prison and now views his idealistic youth in a much more realistic light, and nevertheless gets entangled in a new attempt in which he no longer believes.

Their next film Padre Padrone (1977) (Palme d'Or at the Cannes Film Festival), taken from a novel by Gavino Ledda, speaks of the struggle of a Sardinian shepherd against the cruel rules of his patriarchal society. In Il prato (1979) there are nonrealistic echoes, while La notte di San Lorenzo (The Night of the Shooting Stars, 1982) narrates, in a fairy-tale tone, a marginal event in the days before the end of World War II, in Tuscany, as seen through the eyes of some village people. The film was awarded the Special Jury Award in Cannes.

From then onwards, the Tavianis' inspiration proved faltering. Successes like Le affinità elettive, (1996, from Goethe) and an attempt to woo the international audiences like Good morning Babilonia, (1987), on the pioneers of cinema history, alternate with lesser films like Fiorile (1993) and Tu ridi (1996), inspired by the characters and short stories of Pirandello.

In the 2000s, the brothers turned successfully to directing television films and miniseries, such as Leo Tolstoy's Resurrection (2001) and Alexandre Dumas's Luisa Sanfelice (2004), as well as La masseria delle allodole (2007), presented at the Berlin Film Festival in the section 'Berlinale Special'.

Their film Caesar Must Die won the Golden Bear at the 62nd Berlin International Film Festival in February 2012. The film was also selected as the Italian entry for the Best Foreign Language Oscar at the 85th Academy Awards, but it did not make the final shortlist. 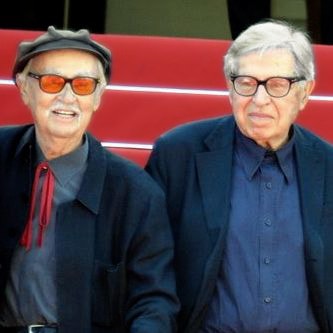